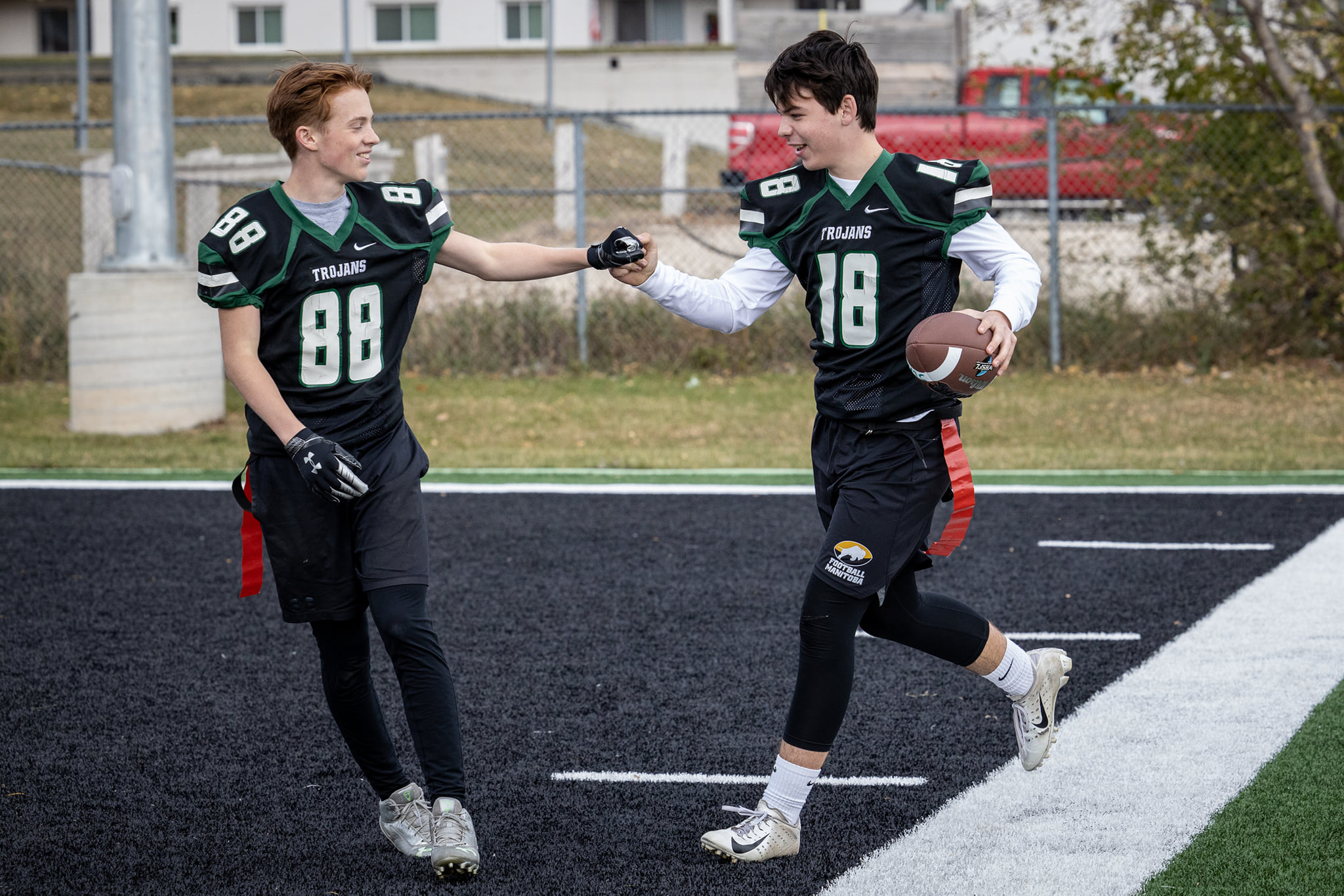 There are countless benefits to being a multi-sport athlete, both from a physical and psychological perspective. Recruiting-wise, participating in other sports helps an evaluator see an athlete do something competitive outside of their own realm of expertise.

Pat Jones – who coached at the NCAA football level for two decades – also noted that playing multiple sports allows an athlete to “stay on their toes” and gain an edge from a competitive standpoint year-round. Urban Meyer, head coach of the Jacksonville Jaguars who previously led Ohio State’s program, also supports this statement. Between 2012-16, 83 percent of the school’s recruits were multi-sport athletes.

Vincent Massey’s Cole McQueen embraces the above. Currently a football and football and volleyball athlete, the grade 11 student-athlete also has a background in hockey.

“I think it’s amazing being a well-rounded athlete. I think it helps in every way,” he says.

“If I could still play hockey then I would, as well as football and volleyball. If you’re an athlete who plays one sport compared to four sports, I feel like the four-sport player would be better overall because of the different skill-sets.”

McQueen’s sport foundation was fostered by his parents. His mom, Cheryl – who also owns Cranked Energy Bars – is a former rugby player, while his dad played volleyball all through high school. Cole picked up hockey in grade five, volleyball in grade six, and most recently football last spring.

McQueen, who plays both high school and club volleyball – the latter for 204 Volleyball Club – didn’t have football on his mind prior to last spring. But a pick-up game with some friends changed his perspective, and he fell in love with the sport.

With a desire to improve his skills, McQueen and his mom reached out a personal friend, Pro Prep co-founder DJ Lalama.

“DJ tried the [Cranked] bars when he was in Winnipeg. He came to the store, and that’s where I met him for the first time. I’m not sure if he remembers that, but I met him when I was working there when I was 12 or 13. Ever since then [Cheryl and DJ] have known each other. Right after that first day when I was playing in the park with my friends, I told my mom I wanted to play football, and she’s like ‘okay great, I’ll message DJ and see if he can train you.’ Ever since then it’s been great.”

On the volleyball court, McQueen is a setter, the quarterback of the offence. Because of his soft hands, he was a natural at the receiver position.

“In grade eight playing volleyball, my hands weren’t super fast, so that was something that I had to work on,” he says.

“The middle blocker on the other side is obviously one of the bigger blockers. That’s the guy you need to fake out. If you can get your hitter in a one-on-one block, then you’re golden. That’s what every setter wants. As soon as I got my hands faster, my hitters seemed to get more open, so I just kept working on my hands. When I picked up football, it was kind of natural. Even DJ said that I didn’t have to work on catching or anything, because I could catch a ball naturally.”

McQueen started training with Lalama last May. The major emphasis during training was on the reciever’s speed, both in explosion off the line as well as in space.

“I wasn’t the best runner at the start. I had tight knees and tight hip flexors. I just didn’t have the explosiveness that I have now. DJ helped me through that. Twice a week we would do speed sessions trying to get me faster, and at the end we’d do in-game stuff like route running and catching. From there, it progressed pretty fast. All of a sudden I was in a summer flag league and doing pretty well.”

“Cole is addicted to the process and truly wants to get better each and every day,” added Lalama.

“As a multi-sport athlete he has a solid foundation, an unwavering support group and a fire inside that will take him as far as he wants to go. Every team could use a Cole McQueen, and I am very excited to see him flourish.”

In the fall of 2020, McQueen tested his skills during the Pro Prep Flag Football League, created in order to fill the tackle football void due to COVID-19. He made a major statement in his first game, and quickly turned into one of ICVMC 2 pivot Luke Thalman’s favourite targets. The consistent red zone threat was among the top of the league in touchdown receptions, earning First Team All-Star recognition at season’s end.

“It felt amazing,” he noted of the PPFFL.

“My favourite part was definitely playing under the lights during an 8:30 or 9 pm game. My goal in the first game was just to burn one guy and hopefully catch the ball in the end zone. I ended up getting a diving catch in the end zone as my first touchdown. I couldn’t be any happier.”

For as good of an athlete McQueen is, he’s an even better person. He credits his parents for his consistently positive attitude and work ethic in everything he does.

“Hopefully if I treat people well then they’ll treat me well,” he says with a smile. “I think everyone should be treated as good, wholesome people, and I think that everyone is a good person in some sort of way. Everyone has their own skill-set, so I don’t think there’s a reason to not be positive.”

With football training back in full swing, along with volleyball, McQueen is eager to showcase his skills once more, ideally in a tackle setting.

“I’d consider myself new to the sport compared to others. I definitely need to work on making all of my routes look the same, just to be more deceiving. From there, if I can fake out a defensive back, then I’m pretty confident that my speed can carry me. I can’t wait to play tackle football for the first time. Pro Prep was a little bit of an introduction to organized football for my first time, and I just hope there’s something in the spring for us.”