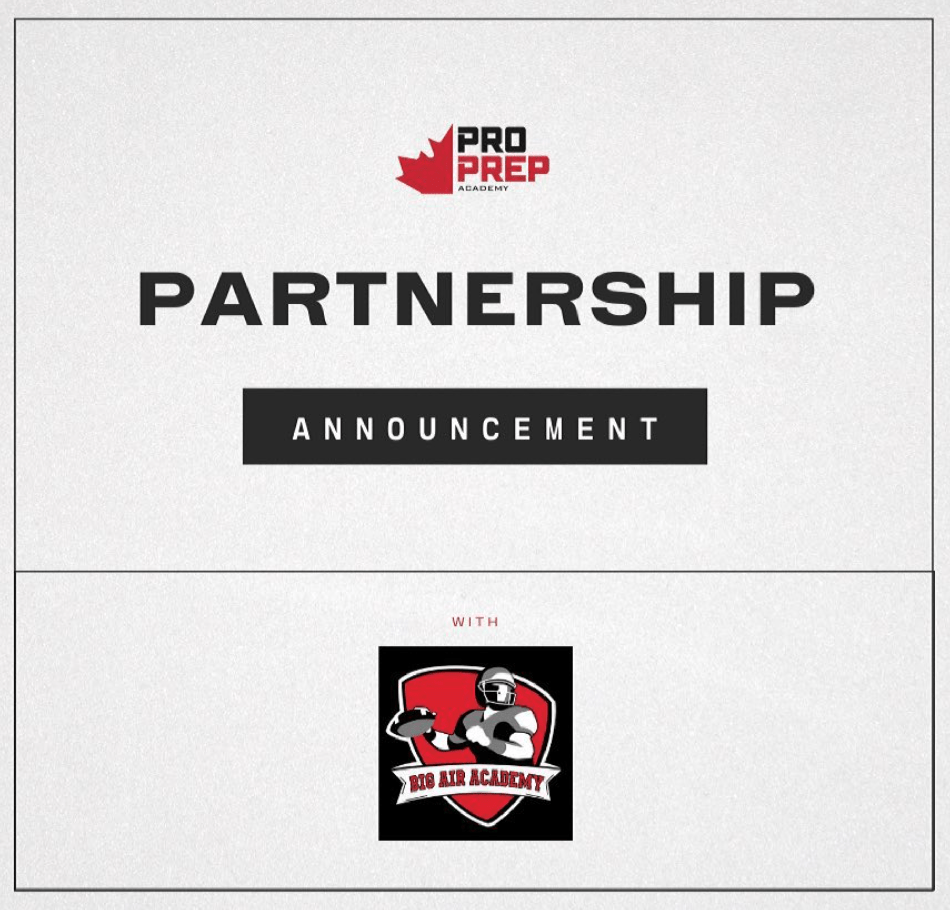 Pro Prep Academy co-founders DJ Lalama and Andrew Harris are pleased to announce a partnership with Big Air Academy. Founded by former Winnipeg Rifles quarterback and offensive coordinator Aaron Giesbrecht, Big Air was created in 2017 with a vision to provide quarterback and receiver-specific fundamental training while also filling a gap in the province for offensive skill player development.

“The football community here in Manitoba is full of leaders and educators that are extremely passionate about the game itself, but also to lead and inspire the young men and women that participate in this sport. Bringing the likes of Aaron and the whole Big Air team into the Pro Prep Academy family takes our football offerings to another level,” said Lalama.

“These are great people and great coaches, with a common goal and vision. The possibilities are endless and we are excited to be attacking these together as one.”

Big Air’s core values of inclusivity, mentorship and creating a general sense of camaraderie are directly aligned with that of Pro Prep’s.  In order to achieve these core values, Big Air carefully selects experienced coaches who are passionate individuals that bring a positive attitude to the field.  From 2017-2021, Big Air has held numerous camps, allowing multiple age groups to come out and develop their skills, create new relationships with players and coaches and ultimately have a good time.

“I am super excited about creating a partnership between Big Air and Pro Prep Academy, as it’s going to allow for us to work with like-minded coaches in creating a positive environment, that brings a sense of belonging to the players, and allows players to reach their greatest potential,” noted Giesbrecht.

“After the year we’ve had, I am grateful once again to have the opportunity to share my expertise as a coach, and bring our football community to the next level. Andrew and DJ’s vision perfectly aligns with Big Air Academy’s beliefs.”

Beginning on April 5th, the two groups will come together to host a month-long football academy. The eight turf sessions will take place at Garden City, with offensive, defensive and linemen-specific offerings available.

“I’m personally just very excited to be around football again,” added Harris. “On top of being in a coaching and leadership position, we are very pumped about the team of amazing coaches that will bring each and everyone of our members’ games to another level.”

All sessions (four per group) will take place in the evenings, with defence beginning on April 5 at 8:30 pm, linemen on April 7 at 9 pm and offence on April 9 and 7:30 pm. There will also be four crossover compete days, beginning on April 11 at 10:15 am with the younger group and 11:15 am for the older group. The compete days will include one on ones and pass skeleton, in order to apply the skills learned in the position-specific sessions.

Registration cost for the eight turf sessions is $225 plus GST, but members can also take advantage of three exciting performance packages, which are being offered for up to25 percent offthe regular price. Each package also comes with four virtual joga sessions.

The Performance Plan includes all sessions, along with custom programming, in-app workout delivery, detailed exercise videos with coaching tips, exclusive access to articles, videos, webinars and more, as well as preferred pricing for all other Pro Prep Academy services. The cost is $300 plus tax.

The Prep Plan includes everything in the Performance Plan, as well as individual metrics and progression dates and individual performance video review and coaching. The cost is $350 plus tax.

The Pro Plan includes everything in the prep and performance streams, along with two live “coaching corners” per month, performance nutrition guidelines and functional movement assessment. The cost is $400 plus tax.

For more information, including all registration details, click here.