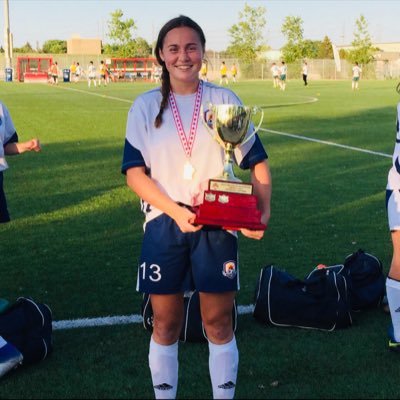 Whether it’s soccer or hockey, Ava Memka loves the thrill of competition.

Memka’s first love was hockey. Starting around four or five, she was always on the ice. As a left winger and centre, she would typically play age advanced, suiting up with the likes of Manitoba Bisons commits Ashley Keller and Dana Goertzen along the way. She had a knack for scoring, and still does to this day as evidenced by her two hat tricks and 17 points a year ago with JH Bruns.

When she was 11, Memka decided to try her hand at soccer and a year later she made the premier 1 team for Bonivital.

“I took everything I learned from hockey – the respect, the discipline, the competitiveness, the toughness – and I took it all and just transitioned it to soccer. From there I was able to learn the technical abilities that I didn’t have yet.”

Memka operates as both a centre-back and fullback, and is known for her versatility. She’s able to showcase her physicality and overall defensive skill in the former, while the latter allows her to flash her attacking abilities.

“I’ve been nicknamed Byfuglien by my teammates because of the way I play. Some of the parents still call me that. I’ve been labeled the defenceman who’s a brick wall,” she joked.

“I consider myself to be a very forward-driven defender. I like to play fullback, but I think that a lot of coaches prefer me as a centre back which is okay. I’m willing to defend and hold up the back line and also score some goals later on.”

The multi-sport athlete’s work ethic has earned her some amazing opportunities through the years.

The first occurred when she was 13. Memka was offered a trial to play on Bonivital’s U15 MSA cup team due to her showing with the club’s district high performance group. Naturally, she was driven to succeed.

“I remember going through those trials. It was so completely new to me, but I wanted to succeed so badly. I just remember how badly I wanted to beat everybody in every race and every game, no matter what it was. Even though I was technically a backup player, I was still fighting for the chance to start and to play. That’s what really, I think, got me going.”

Not only did Memka earn a roster spot, she went on to play in every MSA Cup game, helping the Flames advance to nationals. There, she shone as a fullback.

“Steve Dreger and Fabio Capone, they were amazing coaches and the girls were on the team were amazing,” she says. “I love them so much. They let me join the team as one of their own, which I really appreciated, because I was really scared going in. I was really thankful for that.”

In 2019, Bonivital’s U15 group advanced to nationals again, with Memka playing a key role. The Flames sent three teams to the big event, marking the seventh year in a row, and 29th time out of the last 30 years that the powerhouse program has earned MSA Cup honours in some capacity.

“Going to nationals with them was the best experience, because it’s my age group. Those are the girls that I’d played with since U12. I couldn’t have done it without them, it is a team sport for a reason.”

On top of her club soccer success, Memka has also suited up for the province’s top two high performance squads in Valour FC Elite and the Regional Excel (REX) program.

Valour FC is a travelling team open to the top female players in the province aged 14-17, while the REX is offered to the province’s top U13-U18 players. There’s a total of eight Canada Soccer Regional Excel Centres nationally, with the goal being to develop female talent that can compete with players across the country and worldwide.

“Going to tryouts for the first time against girls like that was terrifying, but I remember [coach] Matt Thomas was like ‘I know what you can do. Just try, just compete and go for it.’ I did make the team. That was the best feeling in the world just barely coming out of U13 and into U14 and making that team. That’s when everything started falling into place.”

With reference to Valour, being able to compete against top American competition is what the JH Bruns student loved the most.

“I just absolutely loved travelling. Going to those places and playing to the level that is out there – San Diego is a great example – those teams we played are easily the best teams I’ve ever faced. The level of play down there is so amazing.

They set the bar, okay I’ve got to pass it. Any time I go to the states to play soccer, I feel right at home because there’s all these big, fast and strong girls. I love it, because I’m able to keep up with them, beat them in footraces and out-muscle them. It makes me feel pretty good when I can do that.”

Memka will have plenty to look forward to competition-wise in the coming years, as the class of 2022 athlete has committed to play for the University of Manitoba. Her timing is impeccable, as the Bisons recently graduated their entire back line. Memka will join a defensive core that includes 2019 Canada West All-star Stefanie Young, another two-way player who can make a difference on both ends of the pitch.

Above all else, the Bonivital star is excited to learn under Bisons head coach Vanessa Martinez-Lagunas, one of the most decorated female coaches in the world.

“Me and Vanessa, our images of what we want to do on the pitch completely align. She’s a driven lady, she’s super competitive, and that’s such a huge thing. I want to win, and I know Vanessa does too. She pushes her girls the best that she can, and I want to be the best that I can. Having her as a coach, and having those players around me that have the same mindset is so amazing and so different from any other experience.”

While sports have been shut down due to COVID, Memka has continued to ply her trade. She’s been attending Pro Prep’s Dishing with the Destroyer sessions with Desiree Scott, someone she admires greatly due to the similarities in their games.

“It’s funny, because I see a little bit of me in her. Her name is the destroyer, and I’ve been nicknamed Byfuglien. It’s really good to have a role model like her. I just like being able to communicate with her and ask questions. Even being able to do the soccer drills, it’s just something to do, which is a big thing right now.”