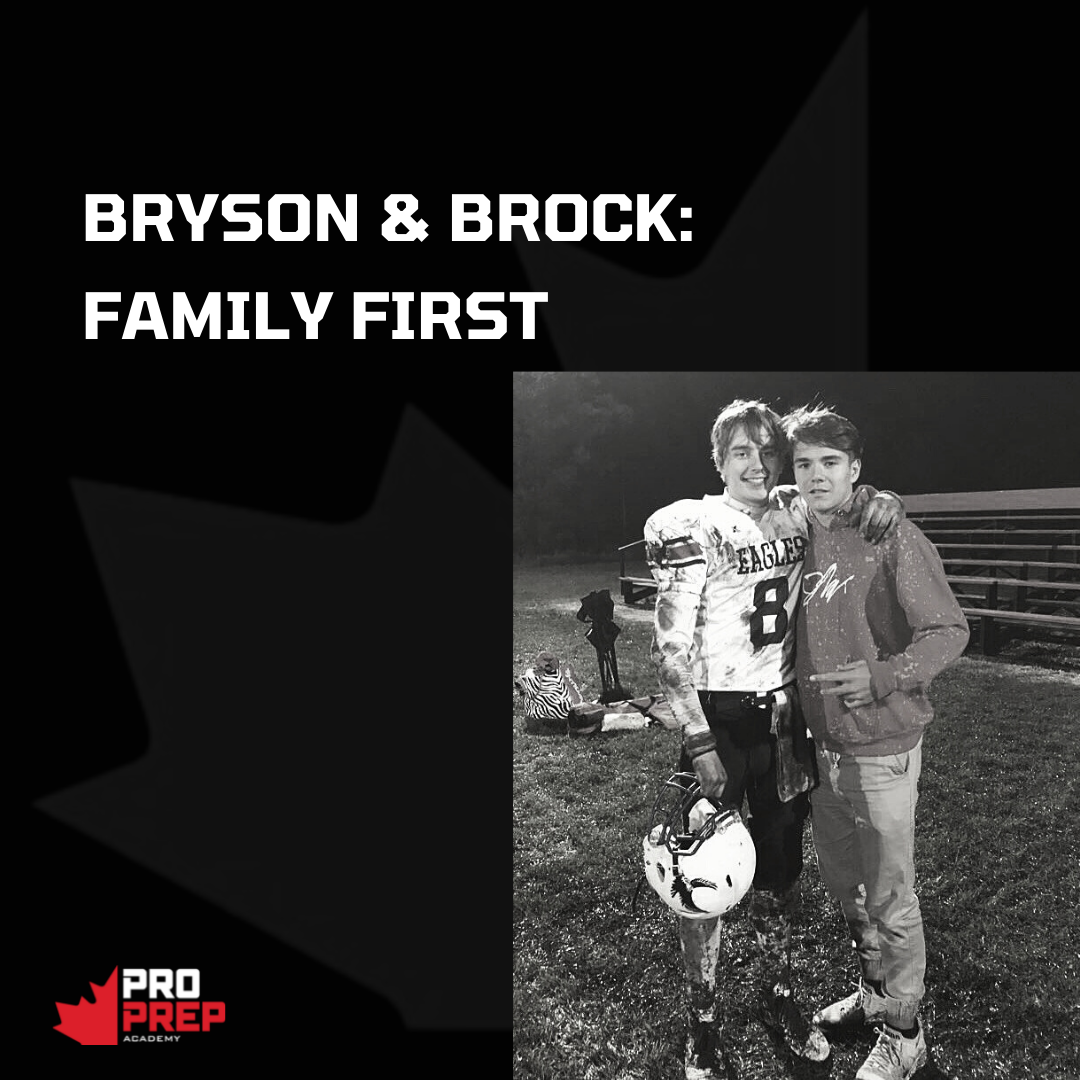 Family ties run deep all through the Manitoba football community. Recent examples include the Naujoks trio (Scott, Brendan, Riley), the Conway trio (Stefan, Daniel, Nick) and the Bockru trio (Macho, Markos, Mikias). Most of these athletes are playing (coaching in Scott’s case) at the post-secondary level with the Bisons, while Mikias is an athlete to keep an eye on in the class of 2023 as a receiver at Dakota Collegiate. Brock Beauchemin, the man throwing him the ball, is part of another bloodline that’s been on the rise.

The 2023 prospect, who stands at 6’3”, 200-pounds, is the younger brother of Bryson McNeil, the starting quarterback for the Winnipeg Rifles and former multiple-time MMJFL champion. Prior to that, McNeil made a name for himself with the Churchill Bulldogs and River East Kodiaks. At the time of his senior season in 2016 with the Kodiaks, he was referred to by current Bisons defensive backs coach Sean Oleksewycz as the “best quarterback and leader I’ve been around at 17.”

Beauchemin is newer to the pivot position, but has the same natural leadership traits as his older brother. In his first year under centre in 2019, he helped the Lancers advance to the junior varsity championship, showcasing a rocket of an arm that also runs in the family. He was also named Dakota’s grade nine Athlete of the Year.

“Our mom [Lindsay] pursued baseball and still plays it to this day. She travels with Team Manitoba for softball. She’s a solid third baseman with a cannon, that’s where the arm comes from,” remarked McNeil with his trademark smile.

McNeil has seen and done it all during his career. He was a four-year starter during high school, which included a nod as the WHSFL’s Rookie of the Year at the Division 1 level in 2013 with Churchill. His arm strength, accuracy and football IQ made him one of the league’s most highly-touted prospects in the class of 2017. And while his intangibles are impressive, it’s his character and courage in the face of adversity that truly make him who he is.

He’s endured multiple injuries, such as a broken collarbone and torn MCL, but refused to let the setbacks define him. The latter, which occurred in early in his senior year on a low hit, took him out for the first six weeks of the season. A tireless worker, he returned for the last game of the regular season, leading the Kodiaks to an upset over the previously unbeaten Vincent Massey Vikings in the Division 2 quarter-finals. The week after, River East took Kelvin – who’d dropped down from Division 1 – to the limit in a 38-35 shootout.

Throughout his recovery process, Beauchemin was right there for support, as was the rest of the family.

“The torn MCL was the big one for me. I really had to battle to get myself back out there and fight through a lot of adversity. That one taught me a lot. It was completely unexpected, and injuries happen, but it made me the man I am today,” noted McNeil.

“I take in every moment and just move forward with it. It was a great experience at the same time. I got to be on the sideline and coach up the young guys. [Beauchemin] was always a great support and a helping hand in getting me back out there. My family was a big key for me while I was injured. I was at home at the time and they all took great care of me. I wouldn’t have been able to get back as soon as I did. That was huge for my family and definitely for Brock.”

Beauchemin – a self-declared family-oriented guy – previously played middle linebacker for East Side and was always a team leader and captain. His former coach Marsh Burnett-Joseph, now the offensive coordinator for the Rifles, saw something in him as a gunslinger, as did his older brother.

“Finally [in 2019] I switched over. I’ve got an arm so I figured I may as well use it,” he said with a laugh. “Obviously I’ve got [McNeil], who can help with the whole thing, but honestly I feel like it came naturally. The hardest thing was probably the mental game. Playing defence, I’m just head-hunting everybody. I just want to go out and hit everybody, but at quarterback you’ve got to stay calm, cool and collected.”

Beauchemin’s composure was tested following a loss to undefeated Grant Park in the 2019 JV finals. He admits that it wasn’t his greatest performance, and was down on himself, but had a stable support system which elevated him.

“I feel like I let down the team. That’s just me. I feel like I’ve had so much support from my family saying to bring my head up, and just train and go for it. I was just down on myself, but I was definitely keeping my mindset to the future. I was just ready to get back on the field.”

In the offseason, Beauchemin kept in touch with Lancers varsity head coach Mitch Harrison. He told him to get into the playbook, both on offence and defence, as there was also interest for him to get reps at safety. At the time, Dakota’s quarterback room was absolutely loaded, and it was expected that Beauchemin would compete with grade ten starter Caden Caligiuri for QB1 duties.

The COVID-19 pandemic halted those plans. The 2020 season was cancelled and Caligiuri – the third-ranked quarterback in Canada – took his talents to Vista Murrieta High School in California.

Beauchemin remained in the 204, where he continued gaining confidence during Pro Prep’s 2020 and 2021 flag football seasons. His second go-around was particularly impressive, as he displayed leadership and poise and also worked on his quickness rolling out of the pocket. Beauchemin finished the regular season with the most passing yards and touchdowns in the varsity division’s regular season, throwing for 2011 in the former and 39 in the latter overall. His efforts were rewarded at season’s end as he was named Offensive Player of the Year.

“I feel like the Pro Prep seasons really affirmed my decision to be the guy and to go out and give it to those playmakers and make the right decisions,” he noted. “I was definitely a go with the flow guy my whole life, and then quarterback changed my life and I’m just calm and looking forward to that next goal.”

Focusing on the mental game

The next goal for Beauchemin is to earn QB1 duties at the varsity level. He’s got plenty of competition in Rogan Vergata and Blake Penner, but isn’t thinking about that. Instead, he’s focused on improving himself one day at a time, which includes the mental game. In that regard, he can learn a thing or two from McNeil and Barry Berard, who coached the former Kodiaks standout during his MMJFL career.

“I give a lot of props in the mental game to my coach Barry at East Side. Now he’s going to be coaching Brock as his QB coach in the future. That guy is unreal, he’s so good. He knows all the things,” McNeil says.

“He was at the [Rifles scrimmage] and instantly texting me tips and videos of stuff I could be working on. I like to say that I always had a pretty high football IQ, but I didn’t get the football IQ I have now until I played majors. I give so much props to the MMJFL for getting me to where I’m at now.”

One thing is for sure. Both pivots have each other’s backs and are at that point where they can lean on their sibling due to their skill-sets and experience.

“For us it’s going to be a lot of studying and looking back on last year’s film. That’s one thing for me, you want to always improve, so you take all that information, put it together and move forward. We’ve always been the type to watch highlights. That stuff helps too in the mental game and getting better,” mentioned McNeil.

“It’s all love. That’s the best thing about this is helping each other get better. It’s good to have this connection, I appreciate it so much.”

“Now I’m at that stage where I can actually talk to him and give him tips and still receive tips. I know what I’m doing as a quarterback now, I’m not a rookie at it. It’s just better for both of us,” added Beauchemin.

“I love my family and they come first no matter what it is. They’re always there. They’ve got my back.”