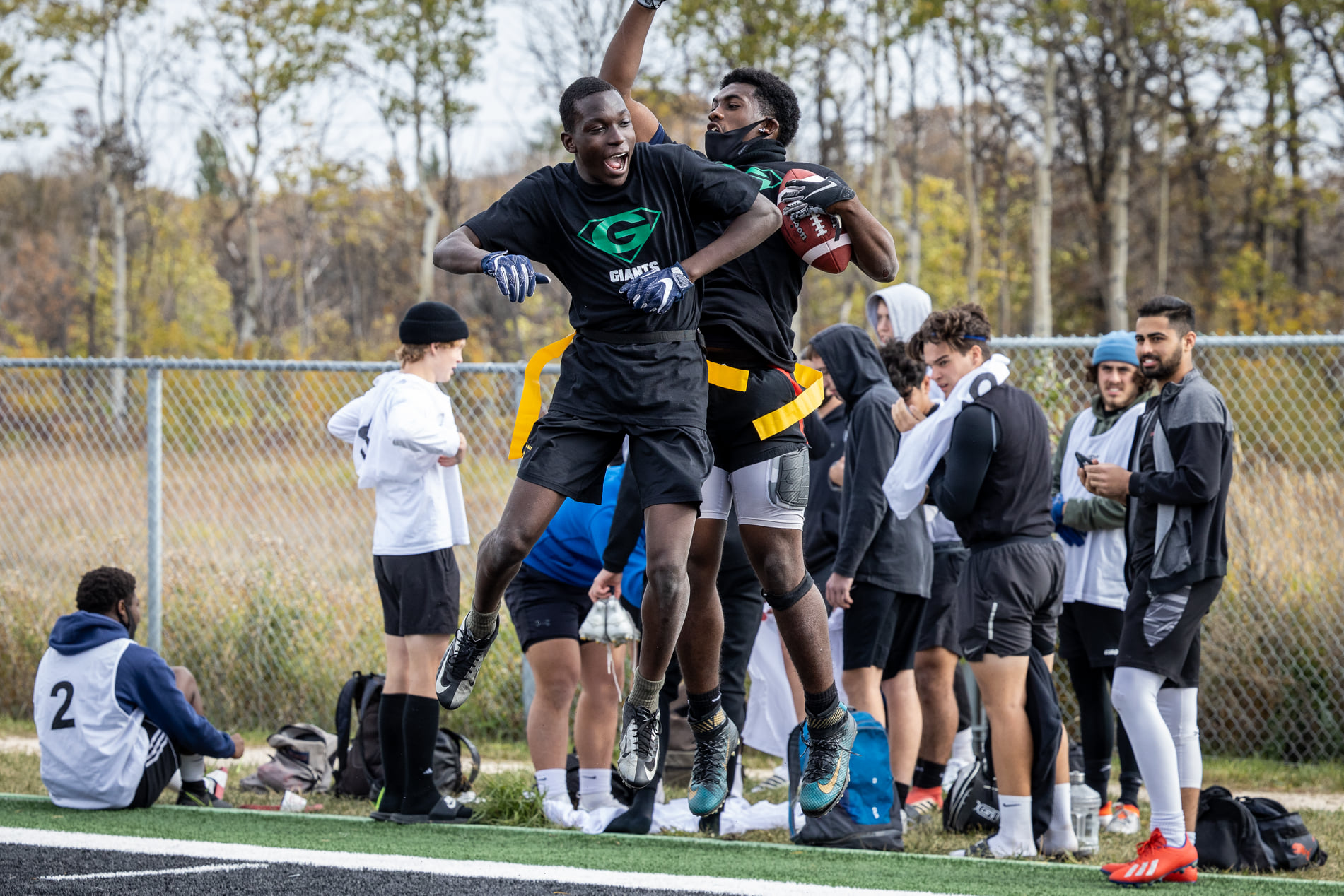 Elmwood’s Isaac Caulker is a dedicated man of faith. His favourite bible verse is 2 Chronicles 15:7, which says “But as for you, be strong and do not give up, for your work will be rewarded.” It’s fitting for Caulker, whose character and work ethic are a shining light in his community.

“That [verse] just shows me that those who do good will be rewarded by God,” the consistently positive student-athlete says.

“I love going to church and always pray before going to bed. Even randomly, I’ll just pray to God to ask him for guidance and peace in my life. Without God, I wouldn’t have made it this far. I’m a calm, happy person. People say I’m wise, but I get it from my grandmother, even my faith, I got it from her. She’s been teaching me since I was a kid. She can talk to me about anything and is a real good support for me.”

Caulker was born in Canada, but this family’s roots can be traced to Sierra Leone, West Africa. His mom and grandma both moved to Winnipeg in 2002, and have been here ever since.

“We’ve had our ups and downs but for the most part it’s been good,” he says. “We’re all very close with each other. Most of the time we’re either talking to each other, laughing or watching a movie. It’s been very wholesome for us.”

Making friends has never been an issue for Caulker.

“I wasn’t a quiet kid,” he says with a smile. “I used to talk to everyone. It didn’t matter to me. I was very outgoing.”

Elmwood classmate Valentine Adedeji, a native of Nigeria, knows this firsthand. He moved to Canada with his family in grade seven for better opportunities, and was welcomed with open arms by the fellow West African.

“[Caulker] was one of the first guys to talk to me, because I was just sitting alone in the corner and didn’t want to talk to anybody. It was different, the accent and everything. He came and talked to me and introduced me to some other guys.”

“That’s my brother from another mother,” added Caulker.

“Me and [Adedeji] are very close, no matter how mad we get at each other. We’ve grown together basically for our whole lives. He showed up to class and our teacher announced that we had a new student. I was like okay, I’m about to make a new friend. The bond kept going from there.”

Caulker and Adedeji are part of a culturally diverse Elmwood community that’s had its up and downs over the years. Coming from lower income households, they understand the value of hard work, commitment and dedication.

“We’re all connected in some way,” noted Caulker.

“For most of us, we don’t come from a working family, but we still find our ways to work through it. This year, all of us are working right now. We found our own jobs, are making money and paying bills. It’s a great way for us to connect and always be on top. I wanted to help my mom out with some bills, like phone bills and house bills. I could see that she was struggling, and I was at the age where I felt that I needed to take responsibility.”

Through his community involvement and athletic prowess, Caulker sets a positive example for others. He’s a high-level basketball player whose potential is through the roof in football, as well as track and field, where he competed at provincials in grade nine in high jump.

“If I’m having a stressful day, I’ll just go to basketball practice,” he says. “All those emotions that I have, I can leave it on the field or leave it on the court. It’s like therapy for me. It’s a really good way to ease your mind and improve yourself.”

A well-rounded combo guard, Caulker’s play earned him a spot with Triumph Basketball Club. In an effort to bond with his teammates, a few of whom went to Churchill, Caulker switched schools in grade ten.

The Bulldogs’ JV team did well. They advanced to the Tier 1 finals, and showed promise for the following season. Then COVID happened. Compelled to return to his community, the talented athlete transferred back to Elmwood for his grade 11 year.

Playing games with the quarterback

John Kiesman, a teacher at Elmwood who’s also the head coach of the football team, was happy to see Caulker return to his roots. The pair had developed a great bond in grade nine, when Caulker played running back for the JV team.

“He’s done a lot for me in my life, especially with school. He’s always got my back and is willing to talk about anything that’s stressing me out,” he says of his coach.

“He invited me to play football for the JV team. That was my first football game ever. I was really scared at first, but it was fun to play. At first I’d get butterflies, but after the first few runs, I thought okay, most of these people won’t be able to catch me. I didn’t overthink it too much and ran the ball every chance I got.”

Caulker’s varsity debut was interrupted by the pandemic, but he showed his potential in the Pro Prep Flag Football League (PPFFL) as a safety and receiver. Defensively, he used his speed to track from one side of the field to the other.

“It was fun. I learned how to play games with the quarterback,” he says of his time in the PPFFL.

“If the quarterback thought I was going to the left side, I would try to start on the right side and end up on the left side, or I would fake like I’m going deep but end up blitzing. I liked [safety] a lot. After that, it gave me the confidence that tackle football will be fun. When I first got tackled in grade nine I was scared, but it’s not that bad after the first hit. I’m really eager to get back on the field as quick as possible.”

Caulker hopes to use athletics to earn a university sports scholarship. His long-term goal is to give back to his community, something he’s already doing in spades with Kiesman and the rest of the football team.

“Say it would be a Wednesday or a Thursday night. We would go to a church and make food, and then we would go give it to people who were less fortunate or homeless. Doing that made me feel like a better person. It felt good to put my time into doing something better than just goofing around. It had a big impact on, seeing other people being happy to have a meal,” he mentioned.

“My goal for the future is just to make Elmwood a good area, and to help in any way that I can. I can see that there’s a lot of cultures in Elmwood. It’s great. These different cultures can learn many things from each other.”

“I have been really impressed with the routine Isaac has established for himself in 2021 and the improvements he has made in school,” added Kiesman.

“If those habits translate to the field, he will be an impact player at receiver and defensive back. He is an elite leaper and has a lot of twitch in him, so it’s all about focus and bringing it together. Like Val, he is still working at Superstore. He rose to the occasion and found work when it was needed. He is exactly what being a G is all about.”