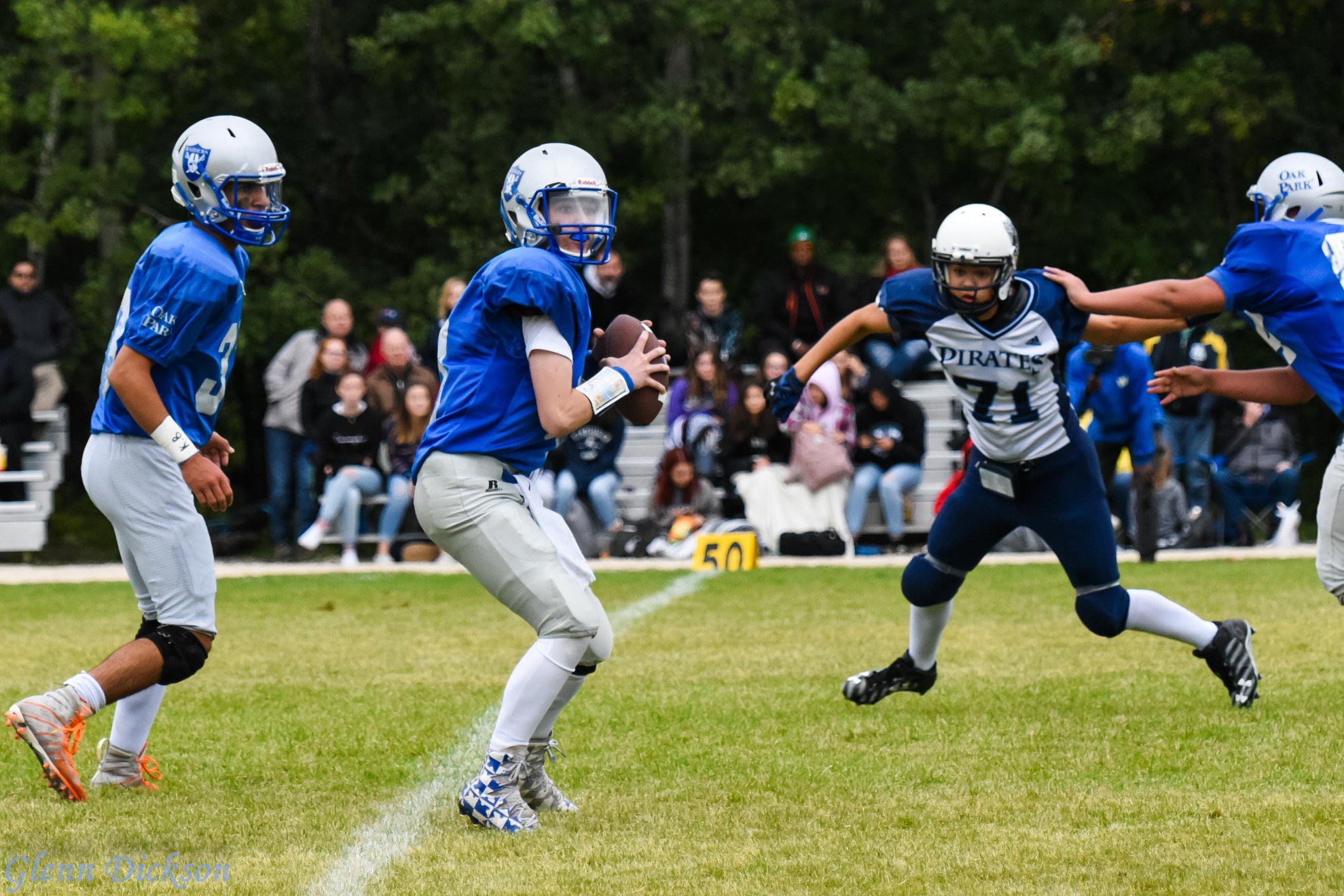 Oak Park quarterback Ethan Christensen is a man of few words. But what he lacks verbally, he more than makes up for with his work ethic, poise, determination, arm strength and release. Pull the layers back even further, and you’ll find a man who’s overcome plenty of adversity in his life, but continues to push forward in pursuit of his athletic dreams.

“It’s been somewhat difficult. I’ve had my ups and downs,” the 5’11”, 185-pound pivot says. I always see myself as the underdog, so I always want to work harder and do as much as I can.”

Christensen, an incoming senior, didn’t take up football until grade eight, but he had a solid base for throwing thanks to many years playing baseball, which he started in grade one. His top speed was 78 miles per hour as a pitcher.

“It was just something fun to do to keep me active and get me out of the house,” he noted.

“I was always a pitcher or an outfielder because I was able to throw fast and far. I love throwing. It just feels natural. I can throw all day, and my arm won’t hurt the next day. From being a pitcher to a quarterback, the leg movement is somewhat similar.”

Christensen originally attended Grant Park High School, where he met Pirates head coach Doug Kovacs. Upon his suggestion, the incoming freshman tried out the sport and loved it.

Adversity followed him quickly. In his debut in grade nine, he dislocated his knee during an exhibition game. Christensen was originally told that he would miss the entire season, but through hard work, he was back on the field in three weeks, hungry to prove himself.

“We were playing St. Paul’s, and it popped out and then popped right back into place. I didn’t feel it at the time. I kept on playing throughout that whole game with it,” he says.

“It was supposed to be a passing play but then I had to scramble. I got five yards and then I got hit by a linebacker. I really got to work on physiotherapy. It was all about strengthening the muscles around the kneecap like the hamstrings and quads. I did a lot of air squats and single leg squats to build a foundation. It felt good to get back on the field, but I wasn’t satisfied.”

The following year, Christensen transferred to Oak Park, where he continued to develop a foundation at the JV level. The season didn’t go as planned for the Raiders, but instead of complaining, he took it as a learning experience.

“I’ve always tried to stay positive about things. I never really let anything bother me. “I’ve learned to be a humble person. Everyone tries to say that they’re better than you, but I stay quiet in that situation.”

In an effort to improve his game and prepare for his varsity debut, Christensen sought out extra help. In the summer of 2019, he began training with Big Air Academy, a partner of Pro Prep which provides quarterback and receiver-specific fundamental training, while also filling a gap in the province for offensive skill player development. Not long after, he reached out to Pro Prep co-founder DJ Lalama in an attempt to improve his overall speed.

In the midst of all of this, Christensen found out that he had a heart condition, but it hasn’t deterred him.

“We were doing workouts for the football academy and something didn’t feel right, so me and my mom went to the hospital. I didn’t realize I had something until I started pushing myself harder,” he says.

“They didn’t find anything at first. Then we had to go to the cardiologist and I found out that I have bicuspid aortic valve disease. The tricuspid valve, there’s supposed to be three, but there’s two for me. Two of the three flaps are fused together. I had to adapt around it. I take more time between sets, but I’m still striving to get the starting job. I have to keep working, and outwork the guy in front of me.”

Christensen’s dedication has been an inspiration for those around him, such as Big Air founder Aaron Giesbrecht.

“Ethan has always shown a natural ability to play the quarterback position but he lacked the focus, drive and attention to detail that is essential to being an elite quarterback.  He has faced some personal struggles and overcame adversity over the past couple of years but through those situations I have seen a new level of dedication, focus and drive to improve and compete at every workout he attends,” says Giesbrecht.

“Ethan is dedicated to the constant work it takes to improve his mechanics and overall play and he is a mainstay at every Big Air and Pro Prep workout. Ethan has tremendous support from his mother Lisa who supports him in every aspect of his life. She goes above and beyond as a parent to communicate with myself and his other coaches and teachers. It is a true pleasure to see the work Ethan has put into his training transferring to his success on the field.”

The work has paid off for the converted baseball player. His Huskies squad is currently 2-0 in Prop Prep Flag Football action, where he’s thrown for seven majors. It’s been a great primer as he prepares for a breakout season in grade 12 for Oak Park.

“Over the course of the last 12 months Ethan has turned his potential into reality as he has continued to work at becoming more accountable to not only his teammates, but himself as well. Ethan is fortunate to have a great support system around him and is a product of his environment in that way,” added Lalama.

“He has the drive to be great, the tools needed to be successful and now just needs to trust in the process has he has learnt to do. He has spent time away from football working on his weaknesses and turning them into strengths. He has overcome much adversity already, and his perseverance has and will continue to serve him well as he enters his senior season. He’s got a chip on his shoulder and I look forward to seeing him prove himself right.”