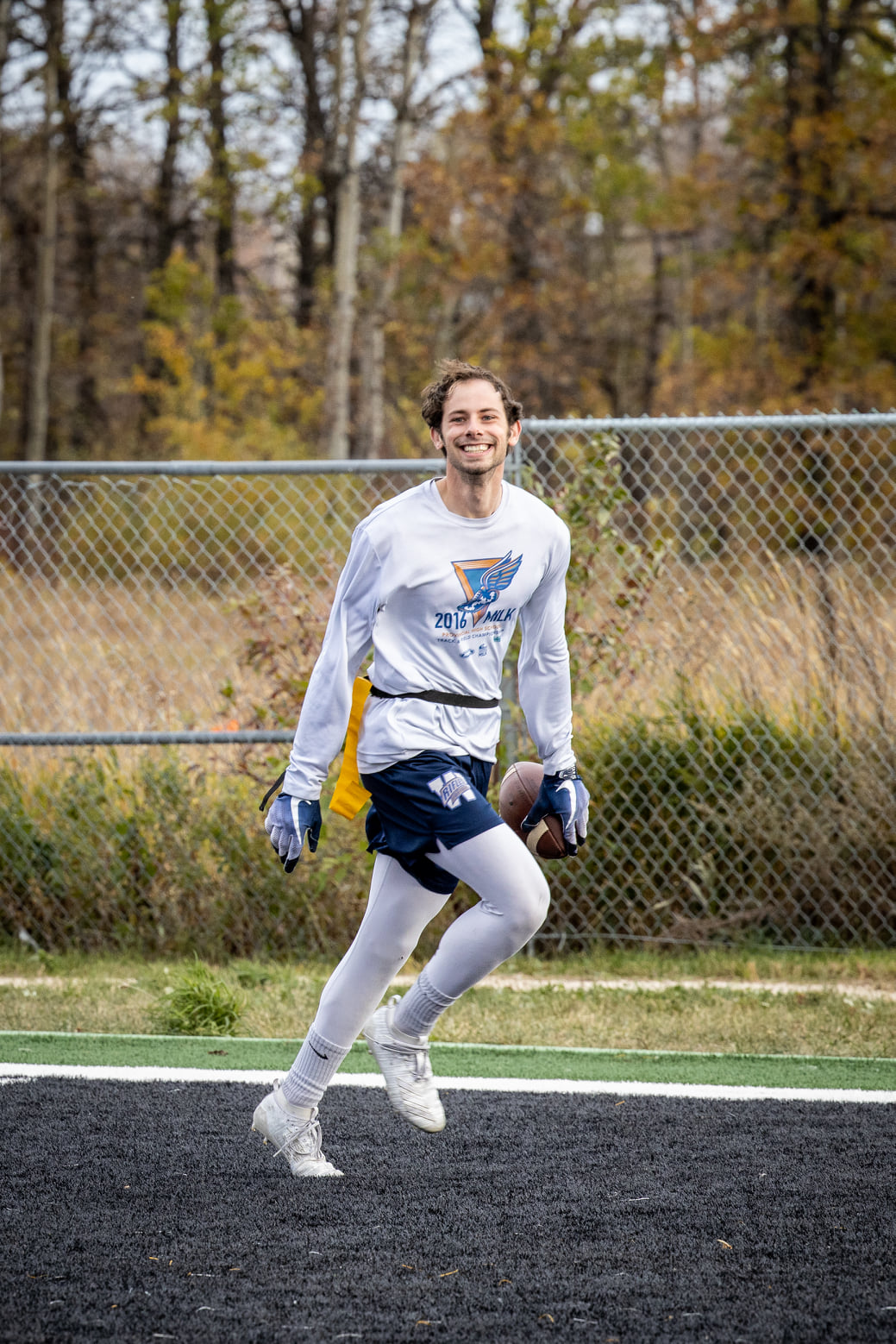 Growing up, Luke McMillan wanted to be just like his dad Grant. The pair share an unbreakable bond, which was rooted partially in sport and partly in faith.

“My grandpa was a pastor, so my dad grew up in the church,” says Luke.

“I was baptized by my grandpa, and I just continued going to church every Sunday unless I had a sports tournament or something. I learned the value of supporting everybody and not discriminating, and being there for people even if you don’t know what they’re going through. That’s a big thing for me.”

Both of Luke’s parents have an athletic background, meaning he was active at a young age. His mom was an athletic therapist for the women’s volleyball national team during the 1996 Olympics, while his dad was a star receiver for the Manitoba Bisons. Grant’s 790 yards in 1993 still rankings second all-time in program history. Father and son also watched CFL games early on, with Luke learning and listening every step of the way.

“I learned a lot about the game there,” he says.

“When I played flag football for a year, he was my coach. I remember before, we were going out skiing for spring break that year a couple of weeks before our first practice. We were driving home in the van, and he gives me this white board and says ‘show me the route tree.’ It was one of the first things that he taught me.”

It’d take a while for Luke to make his tackle football debut. The McMillans had a cottage, and reserved the summers for family time. Luke stayed busy in the meantime. His primary sport of choice was hockey, which he played from age seven under the end of high school. He won a provincial championship with Miles Mac in grade ten and was the team’s captain as a senior.

His dad stayed involved every step of the way. He was his coach until he was 12, with the pair taking up triathlon training not long after that.

“I got into [triathlons], and my dad did as well, which definitely helped. Basically, I’ve always wanted to follow in his footsteps,” recalled Luke.

“We both did those. He had the opportunity to represent Canada at the World Age Group Championships. I forget what year it was, but he went down to Chicago for a race. Obviously I was into that as well. I watched the live stream of that race and saw him cross the finish line. It was something to still compete in the summer and to keep me in shape. I was at a fairly high level, and finished fourth at the Manitoba Games, which was a super group opportunity.”

“[Grant] came home one day and was like ‘hey, do you want to play tackle football?’ I was like yeah, sure, so he was like ‘okay, great I’m signing you up for the U16 provincial team camp,’” recalled Luke.

“He brought home a pair of shoulder pads and a St. John’s helmet, and I went out. I’d just played flag football for one year before that, and I remembered we were doing a screen pass drill. I stopped my feet, and the defensive back came down, picked me up and dropped me on my head on the first day of camp. Thankfully that didn’t turn me away. I kept going, got better every day, and by the end I was winning one-on-ones.”

The second year, Luke came back again, and was one of the standouts during tryouts. Unfortunately, he had a scheduling conflict and couldn’t join the team. He continued trying out for the provincial team all through high school, and was a member of the U18 squad as a senior As always, his dad was a reassuring support.

“Every year he came out and would talk to the receivers coach before the first practice and be like ‘hey man, how are you doing? Do you want some help? He was on the field with me every year. That definitely helped for sure.”

A long-time coach in the Winnipeg High School Football League who recently won a Division 3 title with St. John’s, Grant is a well-respected name in the community. His reach extends to many programs, including Miles Mac, where he coached Rory Anderson, Luke’s offensive coordinator.

The first offensive workout in grade ten, Anderson passed down a nickname Grant had all throughout his career: Spidey. The former Bison had spectacular hands, which is where the name came from, and his son was a chip off the old block.

Luke started for three straight years, and really came into his own in grade 11 following an injury that shifted him into the number one receiver role. By the time his senior year hit, he was the team’s leader, on and off the field.

Throughout his career Luke’s game mirrored his dads, both in work ethic and style, with a few minor tweaks.

“We have very similar games. I remember training Glenn Bruce, who’d been a friend of my dad for a while. One of the first times I trained with Glenn, my dad was there and we were both talking to him after the session. Glenn was like ‘you’re a lot faster than your dad was when he was playing.’ I’ve got that on him, but I think the game has also sped up a lot since he played, so I’d say proportionately we’re about the same,” he says.

“Hands-wise, obviously that’s something that I’ve been working on from a young age. He was always throwing me balls, which is where that comes from. Because we’re not the fastest players, route-running is big for both of us. That’s something that I pride myself on, is running clean routes. He pushes me on that, making sure I’m getting out of breaks faster than when I went into him. We have very similar games actually. I would give him the up on the hands. He’ll be happy to hear that I admitted it.”

Getting the most out of post-secondary football

Following high school, Luke chose to play for the Winnipeg Rifles. While he’s a U SPORTS calibre-player, and recently trained with the Bisons, he wanted to maximize his education and athletic experience.

“Football and education to me are two different things,” the kinesiology student at the U of M noted.

“Obviously I want to be playing university football, but I want to be successful at both. Playing Rifles allowed me to play at a high level rather than redshirt, which was big. I was able to focus on school a lot more, because education for me is super important. I want to be a great student, but I also want to be a really good football player.”

Luke settled in right away with the Rifles. By the end of his rookie season in 2018, he was getting starting reps, and had his breakout game in the team’s lone playoff game, recording four receptions for 97 yards. Not the biggest guy on the field at around 6’0” and 180 pounds, he frequently made catches in traffic and, unsurprisingly rarely dropped the ball.

The following season, the man known as Spidey tripled his reception total and had 241 yards as part of a well-rounded offence that was led by pivot Riley Naujoks. Things fell apart down the stretch for the team though, leaving him with a difficult decision.

He was originally intending to shift to the Bisons after his second CJFL season, but “wasn’t satisfied” with how the season ended.

“I knew I could give more to the Rifles. The way the year ended wasn’t the best, so I wanted to go back for more.”

That reality hasn’t occurred yet, as COVID-19 derailed the 2020 season. Instead of sitting around, Luke got to work, like he always has.

“I’ve grown up on hard work, and doing stuff yourself. When I found out we were going into lockdown, I remembered I had this old treadmill frame, and I was like, you know what, I’m going to stick some sticks in here so I can do my normal lifts as much as possible. It took about a day to build, because I had all the materials at home. That’s been a life-saver for sure to keep regular lifts and do full-body stuff. It’s great.”