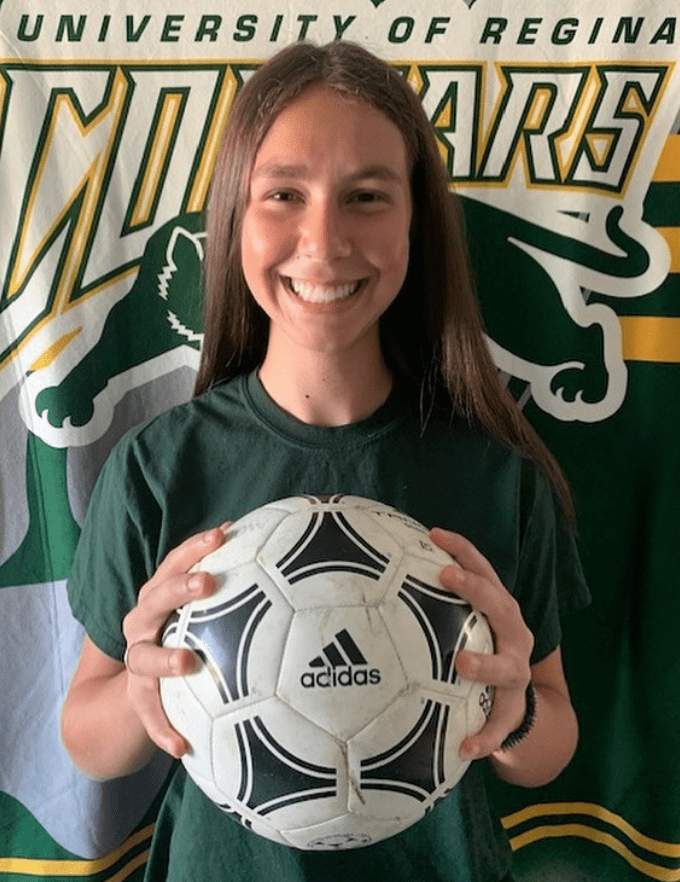 #FeatureFriday: Midfielder Chow a brilliant orchestrator on the pitch

In the sport of soccer, it’s said that good midfielders pull the strings on a team. This is particularly applicable in the case of central midfielders, who are the link between defence and attack in the middle of the pitch. Tasked with being a well-rounded player, they must distribute the ball offensively with speed and vision while also being able to drop back and pressure opponents.

With all this being said, University of Regina commit Jessica Chow makes a pretty darn good orchestrator.

“I love [midfield], because you get a bit of defending and a bit of attacking in,” she says.

“Even though you don’t always get the recognition like a keeper making a huge save, or a forward dancing around a defender and scoring a super nice goal, I feel like I get to help with both. Defensively, I can make a nice slide tackle or I set up the play for someone else to go score. It’s nice to be involved in both parts of the game.”

Blessed with natural leadership qualities, Chow was a perfect fit for Bonivital Soccer Club, one of the largest and most successful programs not just in Winnipeg, but Canada as well.

Formed in the 1980s as a way to provide multi-level participation and development to the youth in Winnipeg’s southeastern communities, Bonivital has won a total of 69 provincial championships, including 40 on the women’s side.

Chow began playing for the club when she was eight, establishing countless friendships while earning two separate trips to nationals. Her second provincial title occurred in 2018 as a member of Bonivital’s U15 squad. The team’s efforts were recognized at season’s end, as they were named the Manitoba Soccer Association Team of the Year.

On the pitch, just like in orchestration, balance, blending and function are critical. If one person isn’t on the same page, chaos can ensue. It’s safe to say that in 2018, Bonivital achieved perfect harmony.

“I learned that I had a lot more potential than I realized, and that teamwork really does make the dream work,” Chow noted of the season overall.

“If you have that team bond and team connection, you can be amazing. It’s not always about having the strongest players or the fastest players. If you have people with different strengths and you play together as a collective, you can do amazing things.”

In grade nine, Chow received an exciting opportunity when she was invited to try out for Manitoba’s Regional Excel (REX) program. The REX is offered to the province’s top U13-U18 players, and there’s a total of eight Canada Soccer Regional Excel Centres nationally. The goal of the program is to develop female talent that can compete with players across the country and worldwide.

Chow had a four-week trial with two other girls, and was the only athlete selected to join. She trained every morning at the University of Manitoba before school and also had off-field “grow sessions” which involved learning about different positions and systems.

At the end of the season, Chow was dealt a surprising blow after being told that she was cut.

The news affected her confidence, as her brain “went into attacking itself saying oh, well you could’ve done this and this better.”

Chow didn’t let the disappointment take over her life though. Like any good orchestrator, she stayed focused and remained organized, leaning on positive self-talk and determination to get her through. She also grinded in silence, putting in extra work behind the scenes to ensure that she emerged a better player.

It’s safe to say her work paid off.

“I was in a little bit of a slump for a bit, but it didn’t take too long, probably a couple of weeks maximum and then I was like okay Jessica, you’re better than this, you’re a great player and that’s just their opinion. Try to prove them wrong. After a little bit I tried to re-focus my energy into working hard, getting my touches in and practicing on my own. I ended up being asked to join the program the next year, so that felt absolutely incredible.”

Balancing the tune of life

When all of the families of instruments in an orchestra are balanced, a homogenous sound is achieved. This same sound is applicable to Chow’s life, as she’s successfully meshed her soccer, academic and personal passions.

On top of two trips to club nationals and a spot with the REX program, Chow has also travelled with Valour FC Elite, which is open to the top female players aged 14-17. The squad goes to three showcases a year, and provides important education on the recruiting process. She’s also a former silver medalist at the Western Canada Summer Games.

Aside from soccer, Chow enjoys track, badminton and more recently, dragon boating, which she took up in grade ten.

“When I was doing it, that was the most fun I’ve ever had, just everyone getting splashed while we were in the boat, and just working really hard trying to push ahead of the other boats. I loved it. Communication is so important, just making sure that you’re paddling at the same time.”

In the classroom, Chow has been a scholar athlete for three years in a row. Her intention is to become a teacher, because ever since she was little, she’s loved helping people.

“If I’m coaching and someone is confused by a concept, and I help them out and finally see them get it, that smile on their face and that feeling that they’re being accepted, that’s just great to see.”

Chow’s passion for teaching was also a factor in her commitment to the U of R, as the school offers joint programs in education and science. She also attended the soccer team’s ID camp a few years ago and loved the experience. The dedicated student-athlete formally put pen to paper earlier this summer on her commitment.

“I was there for about a week and we did daily training and got to do little sessions with mental strength and stuff like that, and we were living in the dorms, so just kind of getting the full experience of what it would be like living as a university athlete. When we got to meet with the team and go in the dressing room and stuff like that, the dynamics I felt there were indescribable. I felt so welcomed and that I belonged there. Everybody was like family and pretty much from there I was like, this is the place I want to be.”

Much like an orchestrator, Chow hasn’t stopped working to perfect her craft. She’s been attending virtual sessions offered by Pro Prep Director of Soccer Operations Desiree Scott in order to keep her skills sharp in the lead-up to her U SPORTS debut.

“Putting in the work and focusing on some of the small details definitely goes a long way,” she says of what she’s learned so far.

“We had a technical session with a bunch of different age groups and we were just working on different touches for a minute at a time. She was saying how first, you’ve got to get the basic pattern down and then try to go faster and get your head up, so just all the little elements to it to make yourself a better player which people sometimes forget about.”