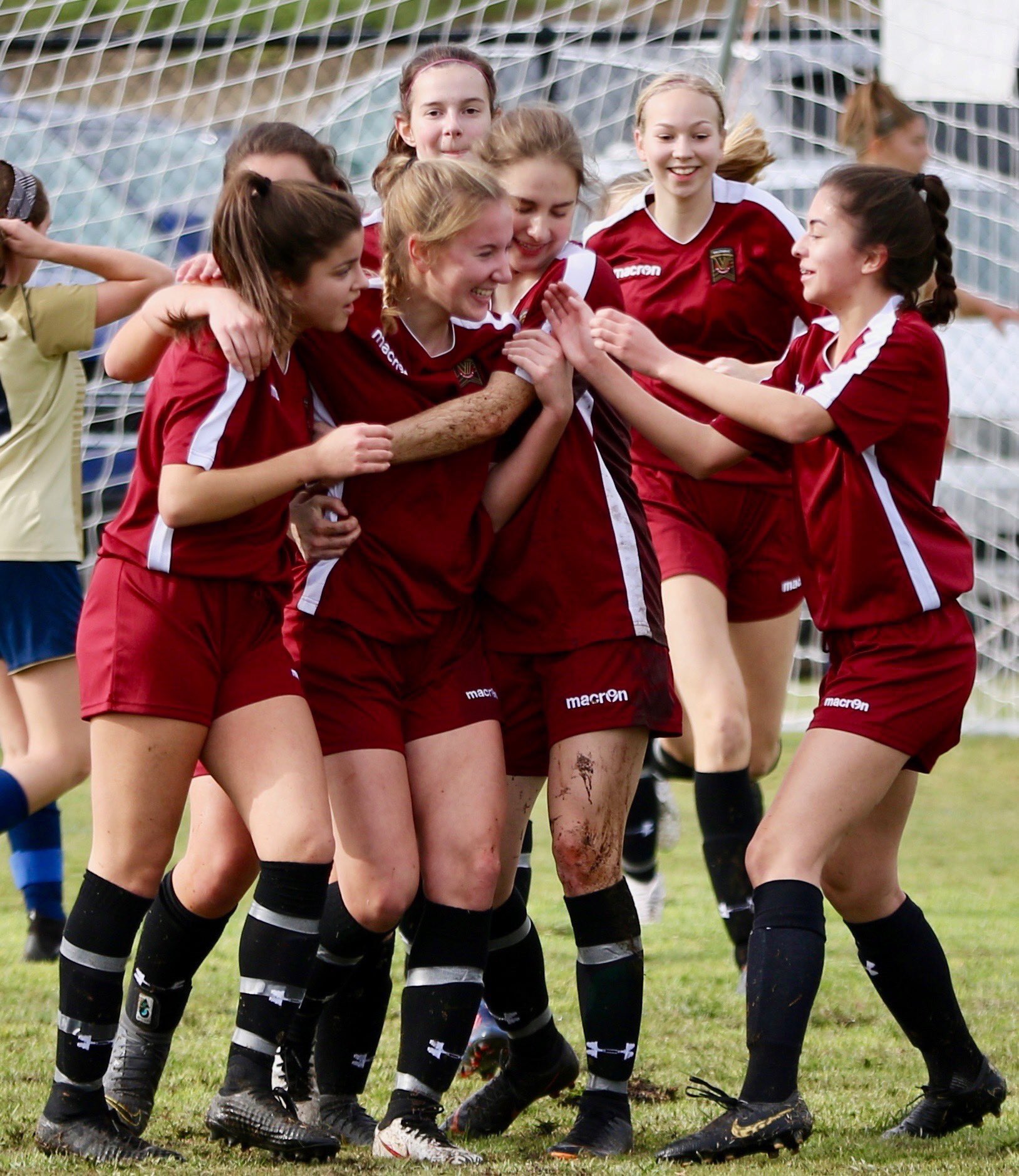 Fearless bravery, strong communication skills and high-level focus are all key traits when playing centre back. Western Mustangs commit Elana Kressock has these in spades.

“When someone’s on a break and you stop them and you get the ball back up to your team, for me personally, that’s one of the greatest feelings ever. It’s great being in control and being able to talk to everyone and just help them out,” she cheerfully says while describing what she loves about her position.

“Communication is a really big thing, and just being able to trust your teammates no matter what. It’s important to have a good mindset and just stay positive no matter what happens.”

When faced with adversity, Kressock smiles, pushes on and keeps working, a common theme during her soccer career.

In 2017 for example, her Bonivital Flames squad struggled to find the win column during the outdoor season. One year later, they went from zero to hero after winning the MSA Cup.  It was an unbelievable feeling for the defender, who’d been with the club since she was eight.

“[Coach] Steve [Dreger] came along and he just had a really upbeat personality and he really wanted to see us all succeed. He gave a big speech that nationals was the goal that season for us,” recalled Kressock.

“I think just the more he was with us as a coach, the more we started to kind of get our game back and started connecting more. And I think our main kind of theme for our team was possession. I think the more we worked on that, the more we started to grow and kind of realize hey, we can actually do this. Winning the MSA Cup, I think that was probably one of the best feelings I’ve ever had with a team before, just because I’ve been playing with the same girls for so long.”

Kressock’s skills were also noticed by the province’s elite-level programs in Manitoba Regional Excel (REX) and Valour FC Elite. Much like at the premier level, she took a negative from one experience and turned it into a positive for the other.

Kressock was contacted near the beginning of grade nine by the REX, who offered her a two-week trial. The program is offered to the province’s top U13-U18 players, and there’s a total of eight Canada Soccer Regional Excel Centres nationally. The goal of the REX is to develop female talent that can compete with players across the country and worldwide.

“But I really liked it and I felt I was starting to understand what it took. By the end of the two weeks, they asked me to stay and I was ecstatic.”

Kressock’s ball control improved while in the program, and she was gaining more confidence every week. Two months into her time with the REX however, she got cut.

“That definitely hurt a lot, and I kind of felt like I was in a bit of a rut for a while,” she says. “Luckily, not long after I got an email about the Valour FC program.”

Valour FC Elite is open to the top female players aged 14-17. The squad goes to three showcases a year, and provides important education on the recruiting process. It’s an excellent play to be if you’re looking to play soccer at the next level.

Using her prior setback as motivation, Kressock went to work in preparation for her tryout.

“I thought that sounded like a great opportunity. I liked what it had to offer, especially with the university aspect of it. So, leading up to that, I felt like I just had to work more individually on myself. I was doing a lot of cardio and ball control in my basement, just kicking the ball around, even though it might have bugged my parents hearing all the banging upstairs,” she mentioned.

“I think the REX, even though I wasn’t in it very long, it definitely taught me something about resilience. Even though I felt I kind of got shut down, it helped me keep my head up and continue working hard.”

Kressock made Valour’s roster, and has been with the team for three years now. Training and travelling with the team affirmed her desire to play footy at the next level.

“I started when I was in grade ten and you would play against grade 11s and 12s and the 12s, usually I think it’s almost like 90 percent or 100 percent are committed to university. So just seeing that level and seeing all those girls going to university, I was like, wow, that seems like an amazing opportunity and experience. I could definitely see myself doing that. And then from then on, I just kept pushing hard and trying to train and learn as much as I could so that I could be like that too.”

Her hard work has paid off. Kressock received plenty of interest on both sides of the border, but chose Western after a great chat with head coach Martin Painter. Under his watch, the Mustangs have made the playoffs eight consecutive years, while advancing to nationals four times.

“I had a great chat with [Painter]. He was really friendly and I felt like I really connected with him and was able to talk about my experiences. He talked about what the school and the team were like, and it just felt like something kind of clicked. The more I talked to him and learned about the team and the school, the more it seemed right.

In the classroom, Kressock is a scholar athlete with passions in math, science and English. She also built, and stayed in a mini house with her classmates as part of an innovation and design course at JH Bruns, where her athletic background came into play.

“I think it really helped with problem solving and critical thinking and being able to work as a team and take and everyone’s ideas into consideration,” she noted.

“When we had the finished product, it was like an amazing feeling being able to go, wow, we actually built a mini house. That’s like an experience I think I’ll remember forever.

Kressock is leaning towards a teaching degree at Western, which ties in brilliantly with her outreach efforts. She’s helped coach numerous age groups for Bonivital during the summer, and has a passion for giving back based on her own experiences in the game.

“I definitely enjoy seeing the kids and being able to help them learn some new skills and just get to incorporate soccer into that as well. It was really great. Seeing the joy on people’s faces when they finally understand a concept and it clicks is amazing. It’s a great feeling. I just want to help kids, and to show them that there’s no roadblocks if they put their mind to it.”

The well-rounded athlete has kept busy during lockdown, as she prepares to head out east later in the year. She reached out to DJ Lalama, who runs Pro Prep Performance, and he’s given her workouts to do to stay fit.

“I found it was kind of hard to stay motivated and train during the lockdown, so I DMed DJ and asked if I’d be able to join the program. He was super nice and got it all set up for me. He gave me workouts four times a week and I had to fill out all these forms to explain what I was struggling with and how he could help me succeed. I started that, and I can definitely see a difference. I’m more motivated and energized and feel like I’m going to be more prepared once university soccer starts.”