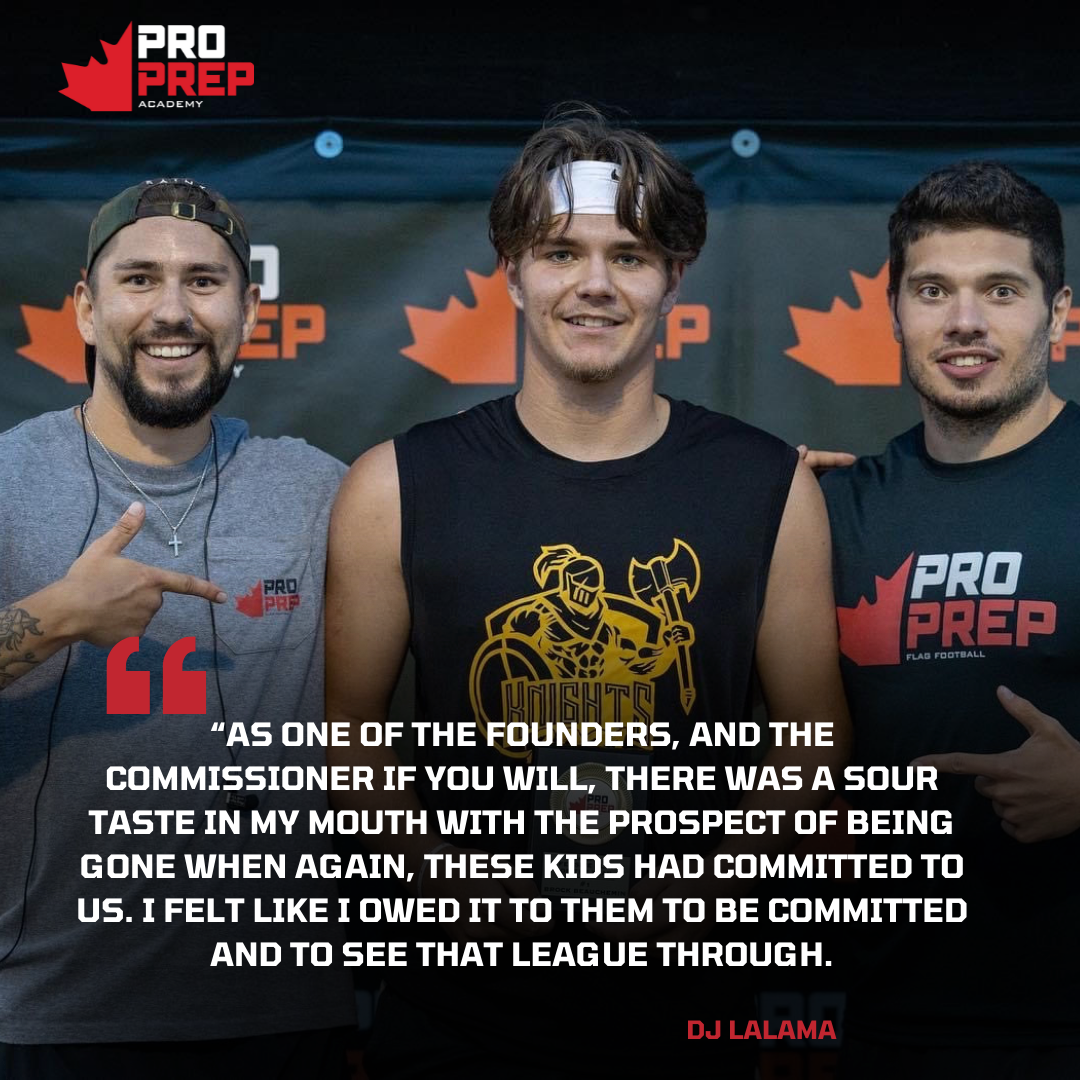 This past summer, Pro Prep hosted their flag football league, a staple within the company that continues to grow. Building off of the success of its debut last September, company co-founder DJ Lalama went to work with his team in order to improve the experience for players, coaches and parents from year one. These efforts were a resounding success, as individuals unable to make the games live were able to tune in via live stream, while mic’d up segments and player features added to the exposure given to those participating. What many don’t know however, are the sacrifices Lalama made behind the scenes in order to ensure the league ran smoothly.

As a member of the Montreal Alouettes and a players’ rep for the CFLPA, he was part of conversations surrounding return to play for the CFL during COVID-19. These discussions took place for the better part of the last year-and-half. As the game’s return became a reality, there was a lot of excitement, but an underlying family health issue made it difficult for Lalama to focus on returning out east.

“The thought of being far away and not necessarily being able to see the people that I needed to see, that made it really difficult. That was item 1A that initially gave me a little bit of hesitation in wanting to report to camp,” he noted.

“Montreal, [General Manager] Danny Maciocia, [Head Coach] Khari Jones, [Special Teams Coordinator] Mickey Donovan, they’ve been nothing but receptive, and obviously I had their blessing to navigate these waters the way that I need to. They said from day one that when things got a little bit better, they’d have open arms for me to return.”

Reason 1B for Lalama not reporting was Pro Prep’s flag football league. Initially, the plan was to have a spring season in May or June which would line up with the end of the high school calendar year – while also allowing Lalama the chance to make it out to Montreal if he was up to it – however the third wave of COVID shut that idea down. With tackle football still uncertain for the fall, Lalama felt it was imperative to stay in the city, in order to – much like the fall prior – offer a safe alternative to tackle in the hopes of getting the athletes involved prepared for whenever the sport returned in full.

“As one of the founders, and the commissioner if you will, there was a sour taste in my mouth with the prospect of being gone when again, these kids had committed to us. I felt like I owed it to them to be committed and to see that league through,” he said.

“That, plus the personal matters and the COVID situation made me not 100 percent comfortable leaving. To flip that to a personal side, I knew if I had reported to training camp, I’d be doing my teammates and the organization a disservice, because I know mentally I wouldn’t be 100 percent in Montreal. I’d be worrying about things personally back home as well as professionally with Pro Prep.

That’s not fair to the people who are supposed to be trusting you as a teammate, friend, competitor and employee. As difficult a decision as that was to come to, I do stand by it. I think it was the right decision not only for myself, but for Pro Prep and for everyone who was involved.”

Lalama, who had an excellent team around him to ensure the league ran smoothly, wore many hats which included running social media at times, and also being the point person on various matters. He was thankful for how the community came together and rallied around each other during uncertain times.

“Being at St. Vital Mustangs field, having their cooperation, doing the live stream so that parents would watch when COVID didn’t allow us to have fans, seeing the coaches and how excited they were to pull out their playbook and get back into the mindset of coaching football, it was amazing to see.

From our medical team and making sure that everyone who wanted to play was doing so in a safe manner, the officials getting back out there, Mike Still doing tremendous work on social and promoting players who hadn’t been promoted in two years, it’s just a cumulative effort of what football means in this community. It brings everyone together, and as the commissioner, when all of those component parts pull together and work in the same direction, it’s pretty remarkable the outcome that can be had.”

Lalama and company are excited for year three. There are many plans in the works, all of which are spearheaded by a passion and desire to give back.

“We learned from some mistakes that we think we can do better on, and I think year three will look even better, but we’re offering something that’s needed. We’re offering a service or platform that’s different from anything else in this province. I would like to thank everyone who’s had a piece in making it what it is.”