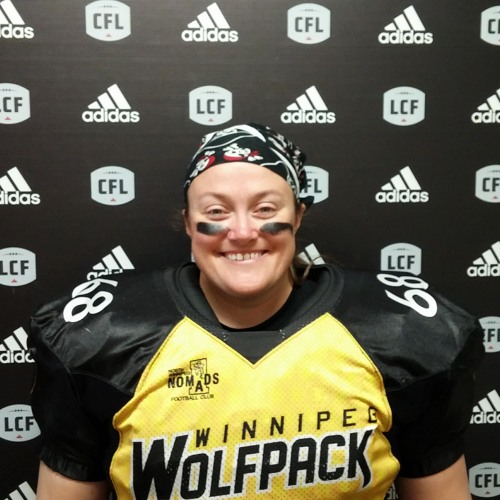 Whether it be the soccer pitch, the rink or the gridiron, veteran Winnipeg Wolfpack centre Laura Dacey has always had a desire to get better.

“Any extra work I could put in and any chance I had, I always take advantage of it,” she says.

“I want to be good for my team, and I want to get better for myself. Ultimately, I’d like to have a chance to try out for the national team. I don’t know if that’s going to happen, but if I put in the extra work, maybe I’ll get the chance to attend a combine.”

Since she was four years old, Dacey’s life has been rooted in sports.

She played premier level soccer as a goalie, continuing with the sport until she was 26. She also started hockey when she was 15, lining up as a netminder. Dacey, now 42, still plays rec hockey, and participated in the Western Canadian Shield Championship (WCSC) a few different times. The WCSC is the highest level of Canadian female hockey for teams below the AAA level.

The one sport Dacey didn’t have access to growing up was football, but the growth senior women’s football in the province over the last decade – courtesy of the Western Canadian Women’s Football League – made her dream a reality.

“One of my friends from hockey was wandering around the arena seeing if anyone wanted to play football. As soon as I heard that I could, I said yeah, I’m in,” she noted.

“I always wanted to play, but there was no girls football or women’s football, and my mom wasn’t too keen on me playing with the boys for that one. When I found out about the Wolfpack I signed up right away, because it’s something I’ve always watched on TV and wanted to play.”

Dacey was a starter in her first season in 2015 and has been a consistent presence up front ever since. She was welcomed with open arms by her teammates, who made her feel right at home.

“That first year everybody was really welcoming. As an only child growing up I never had any sisters, and now I have a whole pile of them. I can reach out to any of them if I need anything at any time. I know they’d be there.”

Coming from a goalkeeping background, being in the ready position and taking the first steps out of her stance came naturally. Snapping was a bigger challenge, but it’s one that Dacey has embraced.

She made her husband stand in the front yard and catch her snaps every day for a while, but she didn’t stop there. For years, Dacey has gone down to the states in order to enhance her overall football IQ.

The first two camps she attended were the World Women’s Football Games, which brought together 270 different players from 21 different countries. The first year she went was in 2017 in Orlando, and she also went the year after in New Orleans.

“There were girls from China, where you wouldn’t think they had girls’ football, and a girl from Japan. Just all over the world,” she noted.

“I went down there with a couple of teammates the first year. They did a women in football forum at the same time, for people who wanted to be involved in the NFL. I got to meet a couple of ladies who now coach in the NFL as well.”

Dacey has also previously attended the High School All-American Hall of Fame Academy in Canton, Ohio. This particular camp brought together the top high school players and NCAA Division 1 commits from across the United States.

“When I went down to the states, I was competing against top players from Texas, California, Arizona, Louisiana and all the other big states for football. Going up against the bigger and best d-linemen I could find, I’m not necessarily going to win the rep, but I’m going to learn a lot from it,” she added.

“I got a lot of contacts from that one camp. It was great that they let me attend even though I’m not a high school-aged player or in line for a Division 1 scholarship. They trained me the same as the boys and gave me the same feedback that the guys were getting, so it was pretty neat.”

None of the people Dacey has come in contact with, such as former NFL and college coach DeChon Burns, have cared about her age, 5’4” stature, or the fact that she’s a woman. She expressed a desire to get better and they embraced her willingness to learn.

“It all started in Ohio. I was remembered by an excellent coach out there. If I’m willing to go down there and work, they’ll welcome me with open arms,” she says.

“After these camps, I’ve connected with a couple of other coaches on Facebook. One of them, I can’t even count how many Division 1 commits he’s trained. He’s in Texas and he’s willing to work with me. The first thing is hi, my name is Laura. I played centre in Canada, I want to come down and get better and learn. I’m this old, would you work with me? A lot of them find it’s an experience for them as well. A lot of it is back to basics, but they’re learning stuff about the women’s game.”

The COVID-19 pandemic halted Dacey’s travels to the states, but she’s still getting better thanks to Pro Prep Academy’s month-long football academy. She found out about Pro Prep via Facebook and reached out to co-founder DJ Lalama regarding the camp, who was happy to bring her into the fold.

“Because I can’t travel, the fact that this is in my own backyard is even better,” Dacey mentioned.

“There are a lot of quality coaches. Coach [Jason] Park was our head coach with the Wolfpack for a while. He’s an excellent coach and probably the best coach I’ve ever had in any sport. Coach [Eric] Vincent, I knew him. I did a little bit of strength training from him. Seeing these coaches that I know as being really knowledgeable, the whole staff is incredible. It’s a great opportunity for me to learn and get better. Brandon [Michalow] is the offensive line coach that I’m working with. Any questions that I have, he’s answered. He doesn’t mind me asking 100 questions, which I usually do.”

Dacey’s journey in football is a reminder that you’re never too old to pursue a passion, or to develop new skills. She embraces being a life-long learner and is a role model to many.

“If you’ve never tried [football] before and it’s something that you’ve always had in the back of your mind, it doesn’t hurt to try it. The coaches are fantastic and very acknowledgeable. They’ll explain everything to you. You can learn a lot and it’s lots of fun.”