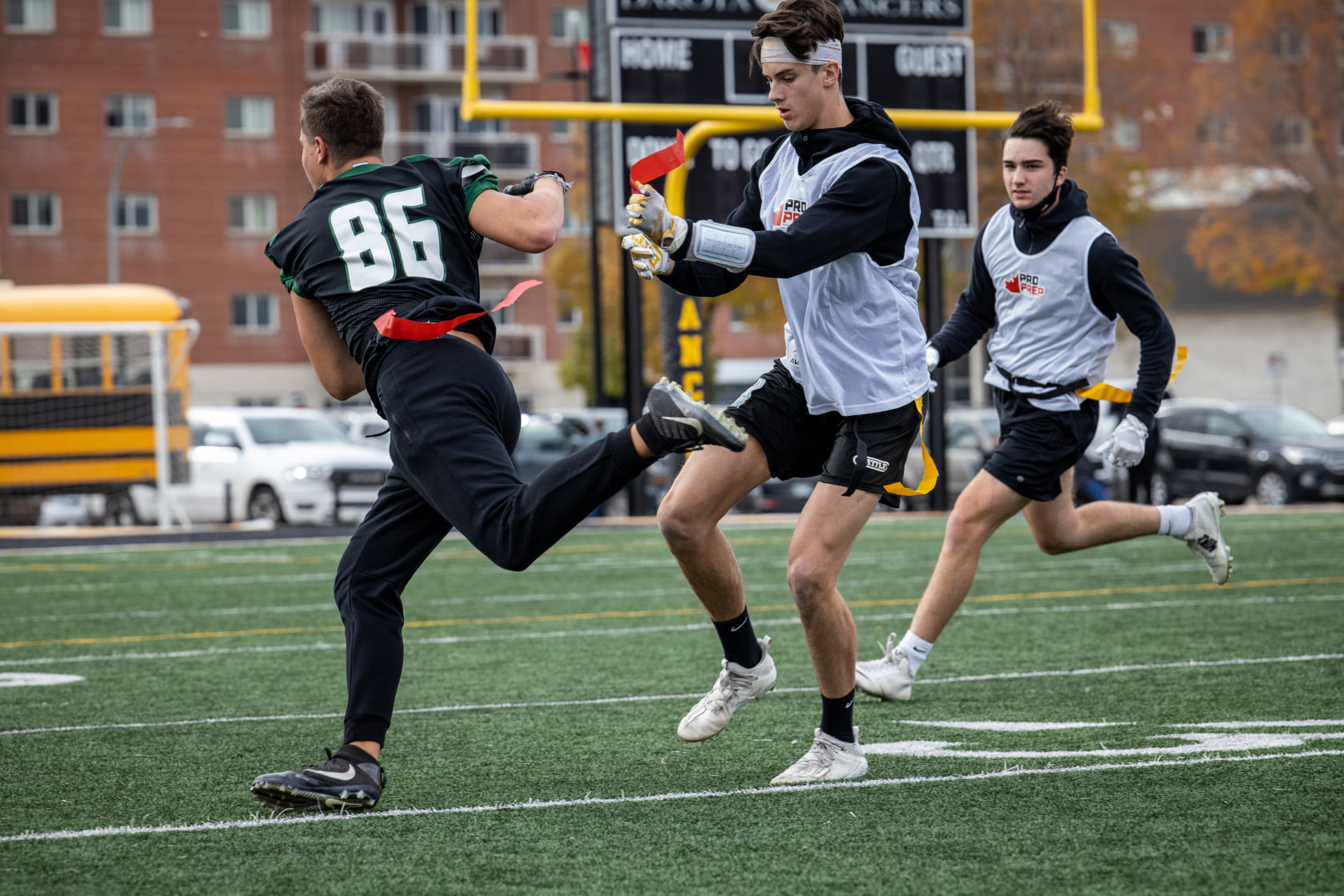 Lockdown U: The story of Jake Nitychoruk

Grant Park defensive back Jake Nitychoruk was built to play university football. Standing at 6’4” and around 200 pounds, he’s a matchup nightmare due to his length, athleticism and physicality.

He was one of the most highly-touted players in the 2021 class regardless of position, and it’s easy to see why. A versatile player, the product of the Crescentwood Grizzlies lined up at halfback, corner and safety during his high school tenure, and is a plug and play player. If you needed him to, he could play offence too.

“I played a lot of positions growing up. I feel like I have a lot of past experiences with that. Whenever a coach really needs me in a position I’m happy to do it and give it my all. I know I can succeed in it, so it’s definitely an upside in that,” he says.

“Starting off in grade seven, I was too young to play JV, but I started training with the team. I was actually a quarterback, so I’d come to morning practices and practice with them in the gym after school. I was a quarterback up until my grade nine year in JV. I liked the contact on defence, so that’s when I switched.”

As a sophomore in 2018, Nitychoruk – a team captain – played safety and corner, recording 35 tackles, five interceptions, three forced fumbles, two pass-breakups and four fumble recoveries. His range was a problem from the deep third, as he was known for his bone-jarring hits. Grant Park advanced to the JV championship that year, with Nitychoruk tallying a forced fumble.

The following year, all eyes were on the rangy defensive back as he made his varsity debut, and he didn’t disappoint. Already one of the soundest tacklers in the division, he worked on his technique and footwork in coverage and it showed. He finished among the top of the league with six pass breakups and also had 23 tackles.

The Pirates went on a run at the end of the 2019 regular season, winning their last three games. Nitychoruk was a massive part of that, with a combined ten tackles, a fumble recovery and an interception. Against Vincent Massey Brandon, he was a one-man island, finishing with five tackles, a pick and multiple pass breakups.

“Coach MacFarlane, he’s a huge mentor to me. He really does everything for us, from teaching us how to lift weights in the gym and all the power lifting, to teaching us about the game with technique, I want to give a big thank you to him,” he says.

“I love to be coached. They know the best and they teach us, so you’ve always got to listen to them. They’re trying to get us better and that’s how you learn from it. Learning from our coaches, I take that and it can help my game and other players on our team. I like to be a leader out there too, so that helps a lot.”

The COVID-19 pandemic derailed the 2020 season, but Nitychoruk stayed busy. His dad – who coached him when he was younger – set up a home gym so that he could work on his strength. Improving his bench press was a major focus, as he enjoys playing press coverage due to his frame.

“I gained a lot of size. My bench going into quarantine was really low, around 160. During the first quarantine I got it up to 215. It’s helped so much. I feel like I kind of got a step on people in that. I was so dedicated for it. It definitely helped my game,” he says.

“I use my length a lot with my arms off the line. So, pressing [the receiver] and getting them off their route helps a tonne. The quarterback only has four or five seconds, so if they look and see that the receiver is jammed and isn’t running his route, they’re going to look away. That’s a huge part. High-pointing the ball with my size helps a lot too.”

A diligent worker who values the little things, Nitychoruk worked on his positioning as a safety during the Pro Prep Flag Football League last fall. He recorded a touchdown in every game, and led the league in interceptions, earning varsity Defensive Player of the Year honours.

“It wasn’t tackle, but flag helped a lot with the angles I took against players. That helped a tonne. It translates to tackle, because when a guy is running, you want to get the right angle. That’s something I’ve always wanted to work on these last couple of years. It was one of my weaker points. I thought [the PPFFL] helped a lot.”

Nitychoruk’s efforts over the years earned him a top ten spot in Pro Prep’s inaugural Top 100, where he was ranked ninth overall. Not far behind him was Sisler defensive back Owen Miller. The duo were among the first commits in Manitoba’s 2021 class, and head coach Brian Dobie has high hopes for each.

“We went after them hard, because we think that highly of them,” he noted. “I expect them, sooner or later, to become starters. They’re just flat-out good and compete. Those are two kids who will lay it out on the line and will challenge for a starting spot.”

Field corner Arjay Shelley – who’s draft eligible this year and has a similar frame to Nitychoruk’s – has received interest from the Arizona Cardinals and is destined for pro football one way or the other. If he comes back for 2021, he’ll start, but if not, Nitychoruk has a chance to play as a true freshman.

“I say this a lot, but really anywhere that they want to play me I’ll play. Corner is a position that I played last year a lot. In the states I played half, which down there is basically a corner,” he says.

“Normally corners are on the shorter side, and that’s what some coaches like. I think football is definitely changing. You see in the NFL there’s taller corners now, and new recruits in the states, a lot of the higher recruits are taller six-foot corners. I really like that style of play and I’m happy [Dobie] does too.”