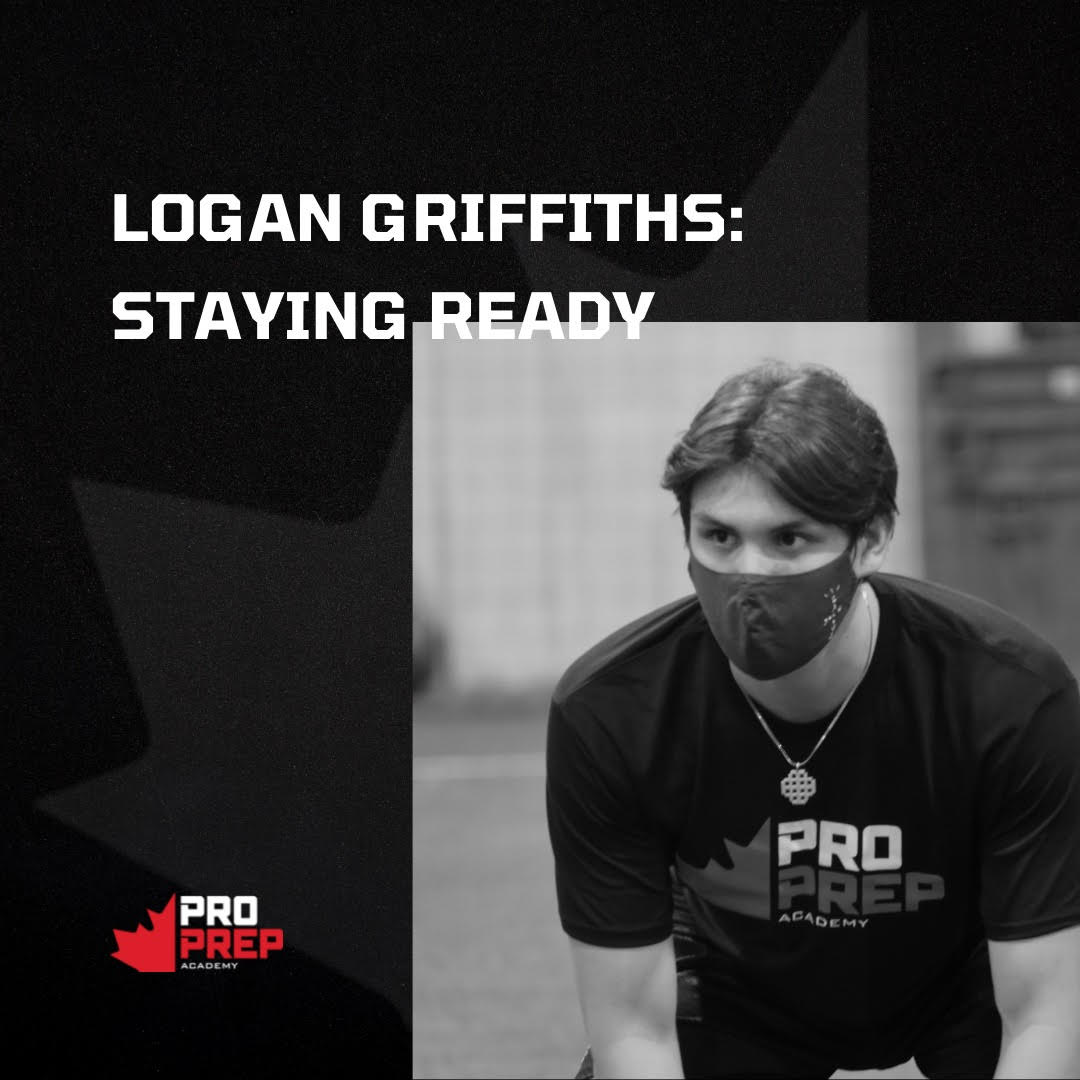 Logan Griffiths is a man of many talents. He lives a well-balanced life, has an impressive work ethic and is relentless in all his pursuits.

“I try my best to work out a lot. I also work a lot. I work at Sobeys on Kenaston, and then I work on a golf course by my house and I also build fences and decks with my cousin. I’m trying to save a lot for university. I’m also a lifeguard, but the pools aren’t open so I can’t do that,” he says.

“Pre-COVID I was doing a lot of music stuff. I play piano, I play guitar. I love music. I have phases. Sometimes I draw. I like to make things. I have an embroidery machine so I made a couple of hoodies and stuff for friends. I’m a fairly well-rounded person.”

On top of all these talents, Griffiths is also a dedicated student-athlete. He played football when he was nine, shifting to soccer afterwards. When he got to St. Paul’s, he took up rugby 7’s. Being a fairly big person, he ended up “running people over.” His rugby coach then told him ‘you’re going to play football next year.’

A wing on the rugby pitch, Griffiths transitioned to defensive end in grade ten in 2018. He played on the junior varsity squad, in order to re-acclimate himself with the game.

“Against Dakota, I had a nice track down sack which was a good memory. I played with a lot of my friends. That’s one thing about football for sure, the community there’s nothing else like it. It’s a tight-knit group of guys. You spend so much time together, you’ve got to like each other.”

The following year, Griffiths made the transition to the backfield, a switch he felt was necessary in order to get acclimated at the varsity level.

“Coming in behind [Saint Mary’s commit] Liam MacDonald and [Dartmouth commit] Zach Lytle, you’re not going to see the field and I understood that. I had to find a position where there was a hole, and that was at running back. I just wanted to make sure I was on the team and got established.”

Griffiths was part of a Crusaders backfield that included starting running back Tanner Frobisher, as well as fellow grade 11’s Skyler Griffith and Evan Myers. Adam Cho was the squad’s starting fullback.

During the season, Frobisher broke his collarbone and was out for the remainder of the year. In his absence, Myers and Griffith interchanged, while Griffiths’ primary role was on special teams. The Crusaders won the ANAVETS Bowl that season, and despite not playing as much as he wanted, Griffiths still embraced the culture within the highly successful program.

“In the moment, you don’t really notice it, but I think the success of the program just comes from the sheer commitment of the team. I know for a fact that every single guy that’s there, they’re there to practice and we all understand what we have to do to win. Whether I understood that I was going to play or not, I knew my role and I just tried to make the best out of the situation.”

In anticipation for his grade 12 season, Griffiths linked up with Crusaders alum and CFL pro DJ Lalama for speed sessions. He was looking to develop his running mechanics and also get his 40 time under five seconds. With the help of Lalama, he achieved his goal.

Afterwards, Griffiths linked up with Lalama for strength training. While this was going on, the COVID-19 pandemic hit. Despite losing his grade 12 season and a chance to show his worth, Griffiths continued to push on. When Lalama and fellow CFL pro Andrew Harris created Pro Prep Academy, Griffiths quickly followed.

He attended every speed and positional session available throughout 2020-21, soaking up all of the knowledge Lalama and the rest of the Pro Prep staff provided.

“Whether it be football specific or in the gym, Logan is always asking the ‘why,’ which shows his attention to detail and willingness to learn and go above and beyond what is expected of him. He is his toughest critic, and uses that as motivation to ensure he always puts his best foot forward when the opportunity presents itself.”

During positional training, Lalama suggested that Griffiths try out linebacker. Standing just shy of 6’3” and 205 pounds, the Pro Prep co-founder felt that his body type would be better suited at the position.

“Logan was a defensive end, raw, athletic and full of potential. As he has matured, his body type and speed was more suitable for the linebacker position as it allowed him to work in space and use those attributes to his advantage. He is raw at the position, but I believe it is one that he can grow into, both mentally and physically.”

Working with the Pro Prep team, and specifically Lalama, has helped Griffiths increase his football IQ, turning him into a more well-rounded player.

“In the very beginning when I was just figuring it out, it kind of blended together and I was learning how to get comfortable in the position,” he says.

“Specifically, DJ’s IQ is what makes him who he is. He’s there before the play even happens. I already had a decent tackle background from rugby, which gave me really good mechanics to start with. I think mentally I’ve been able to have a stronger understanding of what it takes to be a good football player.”

As Manitoba endures a third lockdown, Griffiths continues to remain patient. He’s trusted the process every step of the way, and recently signed with the Winnipeg Rifles. The opportunity was due in part to a good word from Lalama, who has seen firsthand the work Griffiths has been putting in.

“Whatever happens, happens and I’ll just take the opportunity when I can get it. Myself personally, I didn’t get a message from the Rifles to go play for them. I had nothing. I had to go out of my way to even get something. It’s hard to find the motivation, but I’d like to think of myself as a motivated person and that I don’t give up easily.”