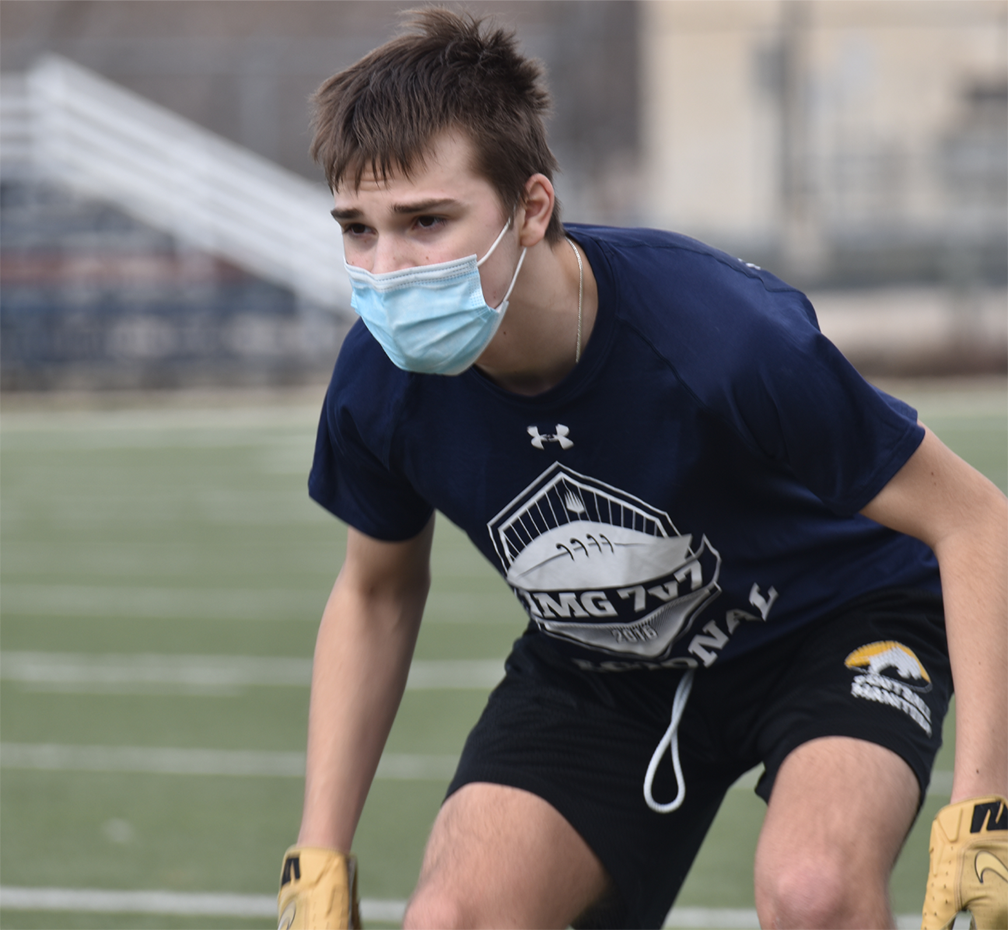 Football runs in the family for class of 2022 defensive back Logan Robinson.

“My dad played football when he was younger. I’m pretty sure he was a safety. I always wanted to be on defence and I wanted to play football after my other brothers who played,” he noted.

“Once I started playing football in first year terminator for the St. James Rods, I really enjoyed it and just wanted to keep playing, It just grew on me so much.

Robinson – who was 5’6” prior to 2020 – has never been the biggest player at his position, but rest assured, he’s one of, if not the toughest. Part of that comes from his home life, where he was frequently involved in “friendly” brawls with older brother Josh, a product of Sturgeon Heights who now plays for the Manitoba Bisons.

“Me and Josh always used to fight every day,” he chuckled. “Even to this day he comes up to my room. You’re 22, I’m turning 17, haven’t we grown out of this? But no, he keeps doing it. We’re a competitive family.”

Logan’s fearlessness is evident on the football field. He played every position on defence minus on the line for St. James, and was one of the team’s best tacklers.

“My dad always said ‘it’s better to be the hammer than the nail,’” he joked.

“When I was younger I was always the smallest one. Learning how to tackle properly and take everyone down because they were bigger than me, I had to focus on what the best way to take them down was, and to do so without getting hurt. That was a big factor in my game.”

When Robinson entered high school, it was a no-brainer that he’d player for Sturgeon. Josh, who stands at 6’1”, had transferred there from John Taylor in grade ten, and made a name for himself as a ball hawking corner and special teams force. His name also carried some weight around the school.

“Going into Sturgeon for the first time in grade nine, it was crazy,” noted Logan. “There were some teachers that knew me. Having Josh as a name there for me, it made me fit in very well.”

One teacher who knew the Robinson family incredibly well was Eric Vincent, an alum of the Winnipeg Rifles and Manitoba Bisons who was the coach for the school’s JV and varsity teams. “Vinny” as he’s known by many of his players, helped Josh believe in himself, both on the field and in the classroom, and is a huge reason why the defensive back is now a member of the Herd.

“Josh was very thankful to have him as a coach, and one day I want to be as thankful or even more thankful than that,” says Logan.

“I want to be what Josh was for Vinny. Josh was always Vinny’s guy. They always used to do everything together, like work out or study, and that’s what I want, because Vinny has helped out Josh so much.”

It didn’t take long for Logan to witness Vincent’s passion for the game.

“The one memory I’ll always have of him is watching him coaching the varsity guys, and seeing him put on the shoulder pads and helmet,” he says. “He was putting his body on the line. He’s a fantastic coach. He can teach any position on the field and he knows the game.”

Logan quickly found out that Vincent doesn’t play favourites. Despite being a talented playmaker for the Rods, he didn’t see the field much in his grade nine season.

“At Rods I was always the starter. I was the coach’s son and the first one on. Junior varsity really woke me up, not playing until there was five minutes left in the fourth quarter. I was not ready and prepared for that. It sucked not being able to help the team out on the field. I just told myself that I can better and I can get bigger and I can do these things. Once I did that, I knew I could be in a top spot and be there for the team on the field.”

In an effort to improve his game, Robinson attended U16 tryouts. He was a standout for a young roster, earning a leadership role as a corner. He credits the team’s defensive coordinator Sean Oleksewycz for his progression. A defensive backs coach for the Manitoba Bisons, Oleksewycz taught Robinson the value of film study while also improving his footwork and overall technique with his hips and lower body.

“The first time I heard [Oleksewycz] yell at me, I was pretty scared. Once we got further through U16, I realized how good of a coach he was. He was able to teach at a pro level, but also a U16 level in order to help us stay disciplined,” says Robinson.

““I remember he asked us if we knew how to study film. Three quarters of us put our hands up, and he’s like ‘I guarantee maybe two of you know how to actually study film. He was right. Nobody knew what they were doing and who to look at. He was a huge help that way for sure.”

“Watching over my grade nine film even now, I’m like wow, that footwork is terrible. I’ve gotten so much better over the years, and I have coach Ollie to thank for that.”

“He comes from a really talented family and great parents,” added Oleksewycz.

“His confidence grew as the process went along. He can still improve with his feet, but he has all the attributes to make a push to the U SPORTS level.”

Robinson was one of Sturgeon’s go-to players in grade ten, putting it all together from his summer with Team Manitoba. He played both ways and was a YAC monster at receiver as the Huskies won the JV title.

“Wide receiver was so much fun. It was fun to change it up and do something different,” he says.

“A lot of people asked me at the end of the year if I regretted playing offence, and I really didn’t. I love trying something new. My dad has always told me that I have great hands, and he asked me if I wanted to play receiver. I said no, I love playing defence too much. I just wanted to change it up a little bit.”

Robinson was primed to be a leader in 2020 as a junior. Instead of making plays on the field however, he was relegated to the couch due to the COVID-19 pandemic, which forced the cancellation of the WHSFL campaign.

Like many others, Robinson did “absolutely nothing” during the phase one lockdown caused by the pandemic, and had worse fortune when he tried to get back into the gym.

“I was sitting on the couch watching Netflix, and after a while I realized this was going to suck for me. Coach Vincent wanted us doing gym sessions at Brickhouse, and I remember the first day we were squatting and I seriously messed up my wrist and had to get a cast. That really sucked, because I was ready to get in shape and everything. Instead I had to sit on the couch for another four weeks.”

When the cast finally came off, Robinson was like a dog unleashed. He got in lots of work with Josh, and also took advantage of Pro Prep Academy’s football sessions and speed work.

“I knew that these CFL guys would give me a lot to learn, and new techniques and stuff. It was so much fun. My first session, I loved it. I want to keep going as much as I can so that I can keep getting better.”

It was during Pro Prep’s football academy that he was reunited with both Vincent – the Director of Academics and linebacker coach – and Oleksewycz, his positional coach. Getting a number of one-on-one reps in was beneficial for Robinson, who also gained four inches. He showcased why he’s one of the top defensive backs in the class of 2022, and has nowhere to go but up from here. He knows he still has work to do, and has a desire to learn and get better.

“When I was younger, I used to just play for fun and have a good time, but now it’s something that I need. It’s like a drug. I love playing it so much, it means the world to me,” he says happily.

“I know I need to improve my technique, get off the ball and react to things quicker. If you have bad technique, a team is just going to keep going at you every single play and it’s going to suck for you. With good technique, you can be a good player and keep going really far, which I hope to do.”