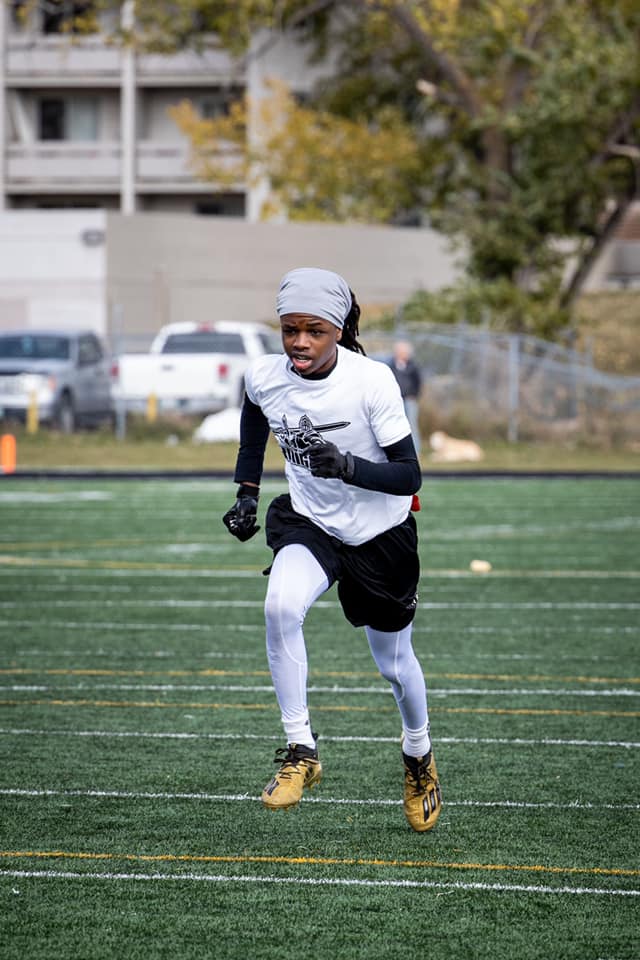 For long-time Bisons football fans, the name Boyd Barrett brings back positive memories. The Jamaica native – whose football roots are in Ontario – was a 2002 First-Team All-Canadian at cornerback for the U of M, and was frequently tasked with covering the opposition’s best receiver. Barrett recorded three interceptions that year as Manitoba went 8-0 in regular season play before being upset in the playoffs. After his at time at the U of M, Barrett played three seasons in the CFL with Winnipeg, establishing a life in the city with his wife Diane and son Elijah shortly afterwards.

The youngest Barrett, a grade nine slotback, is a chip off the old block athletically. One of the province’s up-and-coming names, he has the agility to beat defenders in tight spaces, the speed to break away and the IQ to understand his role.

It certainly helps having his dad there. Boyd has been the offensive coordinator on multiple teams Elijah has played for, including the 2017 Corydon Comets peewee A team, who won the provincial championship.

“It doesn’t really compare. I was just a track guy who didn’t have agile moves. It was a fast a-to-b type of thing. He’s a fast guy and an agile guy,” says Boyd of his skill-set compared to his son’s.

“He’s a diligent listener football-wise and with coaching on the field. Speed kills, agility terrorizes. He’s that type of a player.”

Funny enough, it was Diane who encouraged Elijah to play football. Boyd didn’t want to force his son into the sport just because of him, keeping his playing career a secret.

“I never really said anything, and I think one day we were in the basement and [Elijah] saw a picture. He’s got the picture in his room right now. He went ‘oh dad, you played football? Why didn’t you tell me?’ That’s just me though. I’m blessed with the opportunity I had, but it doesn’t define me in a sense.”

Despite wanting “nothing to do” with Elijah’s practices, Boyd’s coaching instincts kicked in fairly quickly. He’d previously helped out for the Winnipeg Rifles and Kelvin Clippers, and sensed a need to step in while his son was playing for the Comets. Mentorship is a value that Boyd holds dear as a parent, as he didn’t have a dad in his life growing up.

“Basically, [Diane] took him to practice and I showed up late. We were at Corydon and I can’t remember the name of the coach, but he was telling the guys to go ‘rawr’ after they tackled someone. I’m like no, no, you don’t do that. He said, ‘you think you can do a better job?’ It was the cliché handing over of the clipboard. Basically, that’s how that all started.”

“I’ve been blessed to play football, but when I was younger there was nobody there to really guide me or show me,” he added. “I wanted somebody to look up to at the time. Basically I just want to give back now what I didn’t have.”

During Corydon’s run to the provincial title – their first since the amalgamation of Crescentwood and Sir John Franklin in 2011 – Boyd ran a sophisticated offence. It’s evolved over the years, with Elijah taking advantage of his role. In 2019, he was a major part of a Charleswood Broncos offence that kept teams on their toes due to misdirection plays out of a flexbone formation. They advanced to the finals, with Elijah scoring six touchdowns against St. Vital to get there.

“Basically my offence started with a wing-t background that had a tight end, but now that tight end is spread out, and it became a flex offence from the wing-t, but you could still do all the wing-t stuff in the spread,” Boyd says.

“It just evolved into a more college or pro-type offence in a sense. It was about opening up the field and trying to use every dimension. I never, ever favoured Elijah. You find the prime guy. At Corydon, [current Grant Park Pirate] Rhylan [Mitchell] was the guy, so we rode the guy. Years later when Elijah became the guy, then we rode him.”

“My dad’s been pushing me my whole life. It was basically his same offence throughout the years,” added Elijah.

“Since day one, after football practice and stuff I would go home and ask my dad about the cadence part and what time I should start running at. Then I would work on it in practice. I adapted to the timing and I just knew it from there. Some of my friends, they play football as well, but their dads don’t really care about what they’re doing at all. My dad is the type of dad who’s coming to practice every single day and coaching me, basically.”

After a successful MMFA career, Elijah moved onto Dakota Collegiate. His JV debut was delayed due to COVID-19, but he offered a sneak peak of his abilities during the Pro Prep Flag Football League, scoring in every contest. With Boyd as the team’s head coach, Elijah moved all over the formation, finding paydirt in multiple ways while also earning an all-star nod.

On top of his abilities on the field, the shifty slotback is a well-rounded student. His hope is to achieve a scholarship to play football at the university level, where he can then further his educational interests as well.

“I like science a lot,” he says. “I like doing chemistry-type stuff in science class. Right now we’re being taught about the periodic table and bunch of different formulas and mixtures that we have to remember. I thought it was really fun.”

“I want him to have better than I had,” added Boyd.

“Football is the bonus on top of that. Academic-wise, everyone wants what’s best for their kids. Right now he’s picking courses, and I’m trying to tell him like hey man, there’s a new course on understanding your financials that you probably want to take. It’s the little things that I never knew. I’m aiding him in those types of things. If football doesn’t work out, at least academic-wise, you have a backup plan.”

The pair’s bond extends far beyond football, as they have many other common interests.

“My dad is a video game type of guy,” chuckled Elijah. “When I’m playing on the PS4, he’ll come in my room and say ‘let’s get a game on!”

“I’ve been a gamer. I’m talking about from Atari to Game Gear to Game Boy. I’ve done it all,” smiled Boyd.

“I haven’t moved to the PS5, we’re still at the four. I actually still play the PS3. I think I’ve got two of them. Elijah will be playing with his friends and I’ll come in and hey say, can I get a game on? I never really grew up with my dad, so I cherish every moment with him. That’s the relationship that we have.”