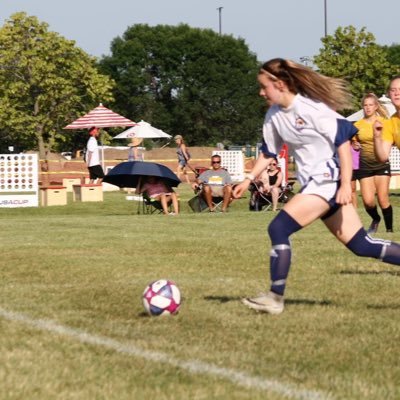 On the pitch, Trysten Anthony is the definition of tenacious.

As a holding midfielder, she has the luxury and willingness to roam further up the field, but is also capable of making key interceptions to nullify the oppositions attack. Anthony sees herself as “a good possession player who’s able to string passes together well,” but also values her role on the defensive end.

“I don’t like when people get by me,” she says matter-of-factly.

“I’m not the fastest player, but if I can get my body in between the opposition and the ball, then I think I’ve done my job.”

Long story short, when Anthony – who’s been playing soccer since she was five – laces up her cleats, she’s determined. She doesn’t relinquish her position, and she’s persistent.

The same can be said of her attitude off the field, where she’s overcome two ACL tears.

The first injury occurred in the summer before grade nine while playing for Winnipeg South End United in an MSA Cup game.

She was defending, and a player got by her. Her foot was planted, she went to twist and her left ACL popped. To make matters worse, she also tore her meniscus.

“Because of the meniscus I wasn’t able to put weight on my leg for a couple of weeks,” Anthony pointed out.

“That resulted in some problems and I had to go back and get a scope because my knee wasn’t bending or straightening.

Due to the scope, getting flexion back was the hardest part of her rehab. Regardless, she pressed on, trusting the process throughout. The Glenlawn student also got into basketball in the meantime, playing for the Lions for one season.

“As soon as I got my surgery, I would work on my flexion every day for probably three hours splitting it up. Just seeing that progress made me want to get better, faster and stronger. Basketball is really big at Glenlawn, so me and my best friend, we joined the basketball team. We’re not the most skilled players, but I had a lot of fun. We won our conference and went to provincials that year, but we lost in the semi-finals.”

Throughout her rehab, Anthony was supported by South End, which has proudly served soccer families since 1986, winning over 30 provincial titles along the way. Anthony played seven years for South End, beginning at age nine. She had specific thanks for Amy Harrison, the club’s former Director of High Performance and Female Programs who’s now the Girls Academy Head Coach for Vancouver Whitecaps FC.

“I really enjoyed my time at South End. It’s such a great community feel there. We had a bunch of practices where we would combine teams, so we got to know a bunch of other players, even from different ages. It was a great group of people and great coaches too. They were always happy to be out coaching us at practices and games. It was just such a great community feel there.”

In 2018, Anthony made her return to the pitch. It was a moment of celebration that she hasn’t forgotten.

“I remember that day very clearly. We were playing against Bonivital and I was only allowed to play 20 minutes a half. I stepped on the field and I got knocked down probably three times, but I was just so happy to be there and to be able to play with my team. The second half came, and I played in the first 20 minutes. I guess in the last three minutes I begged my coach to put me on, and she put me on. I had so much fun and I was just so happy to be back.”

Not long after her return were tryouts for the Western Canada Games. Anthony was cut and felt “devastated,” but understood the decision as her touch wasn’t there, nor was her confidence coming off of a year of not playing.

That same year, Anthony was handed a blessing when she joined Valour FC Elite, a travelling team open to the top female players in the province aged 14-17. Since 2010 – when Valour was known as the Manitoba Blizzard – an average of 12 players a year have gone on to earn post-secondary soccer scholarships, either in Canada or the US.

“I went to the tryouts, but I wasn’t able to try out. I guess a bunch of my coaches put in a good word for me, and a bunch of parents. It meant a lot, especially being with South End for so long, I was just super happy. I kind of felt that I needed to show [Valour] that I belonged there. Just them taking a chance and putting me on the team meant so much.”

Thanks to the tutelage of head coach Jim Zinko and manager Trevor Kidd, Anthony slowly got her swagger back.

“They helped me get my touch back, they helped me get my confidence back, and I just felt that I was even better than I was before. They just taught us so much about what coaches and universities are looking for, so that was great. The coaches Jim and Trevor, they are very, very hard on you, but in a good way. They expect the best from you, and that really helps.”

In the summer of 2019, Anthony joined local powerhouse Bonivital and was looking forward to showcasing her skill. Fate dealt her another tough blow however, as she tore her right ACL during a tournament semi-final in the states. She had sent a long ball, and a player came and knocked her, which hyperextended and snapped her knee.

Yet again, it was back to square one as she went under the knife in the new year. Physically, the rehab was easier having gone through the pain once before. Mentally, not so much. Frustrated, Anthony questioned whether or not she wanted to continue with the sport.

Cue Jesse Roziere, the head coach of Brandon University’s women’s soccer program, which plays in the Manitoba Colleges Athletic Conference. Roziere was quite familiar with the Anthonys, having coached Trysten’s younger sister with South End, while also recruiting her older brother Ryder this past year. He was very interested in the middle child, and offered her a spot on the team.

Anthony, “grateful” for the call, accepted his request.

“I took some time to think, and I eventually made the decision that I was going to keep playing soccer. It’s something that I love, and I worked my butt off this past year to get to where I am today.”

Five months after her second surgery, Anthony was back doing drills. By October she was working on long balls, slowly getting her touch back. Her efforts are proof that no matter how bad things get, relentless determination will win the day. The midfielder is eagerly anticipating the 2021 season, hungry to play and compete.

“I’m really excited to play with a new group of girls. I’ve talked to some of them, and I’m really excited to see what type of soccer we can play and how we can gel. Coach Jessie thinks we have a team that can make it to the college championship, and that pumps me up even more.”