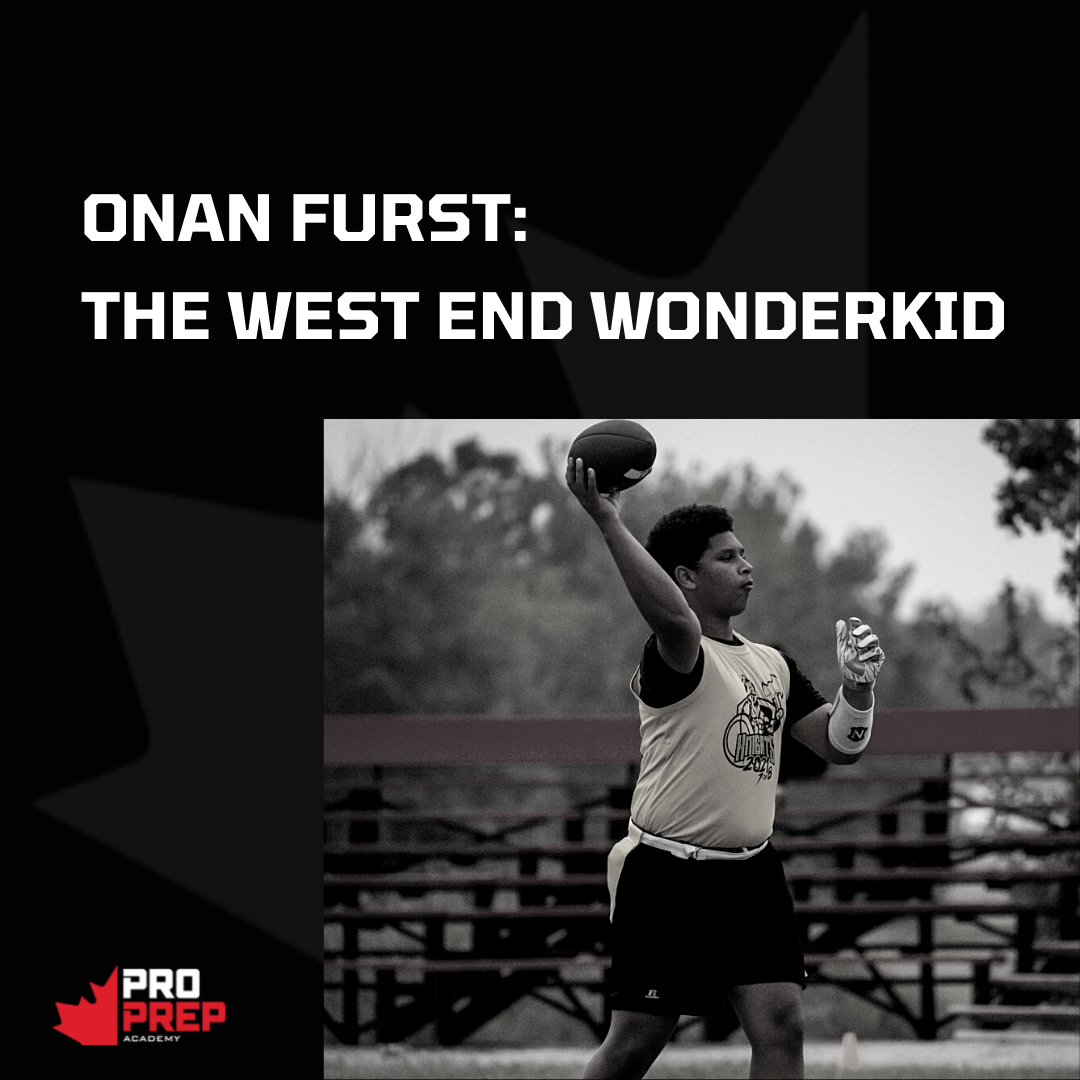 By: Mike Still, Director of Multimedia and Communications (@mikestill94)

Through the years, many great running backs have donned the silver and blue for the ten-time WHSFL champion Oak Park Raiders. More recent examples include Nic Demski (all-purpose athlete), Brady Oliveira and Andrew Harris (originally a member of Grant Park). Incoming 5’9”, 195-pound freshman Onan Furst — a crafty power back whose running style is quite similar to Harris’ — is the next man up.

Furst has been turning heads for years as a member of the Valour Patriots, a west end club founded in 2008 by Frank Zappia, Don McPherson and Joe Buccini as a way to bring the sport to the area. In Furst’s first-year at the atom level, he advanced to the finals, and in 2019, he was the championship MVP on a Valour peewee roster that brought the program its first-ever provincial title.

“It was the first championship for Valour so obviously that’s really nice. We all love football over there. At the field we’re all loud and we sometimes joke around. It’s been really nice to have football community to play with, and winning it with those guys was fun,” he says.

“We had a really good team going into peewee from our atom team, and we had some pretty good guys on the peewee team already, so I knew we would have a good roster. We played together and stuck together the whole game, that was really nice. Nobody was getting mad at each other after a mistake.”

Furst’s performance against Charleswood in the title game two years ago was a microcosm of his season, and career as a whole. In the contest, he showcased not only his aggressiveness as a ball-carrier, but also his vision and football IQ.

The latter was encapsulated perfectly on Valour’s opening touchdown, where Furst shifted from his running back spot to quarterback, tossing a major to open the scoring. It was one of many times during the game where Furst switched with 6’3” pivot Dillano Glaud (now at Clearwater Academy in Florida), in order to maximize each player’s unique skill-set on certain drives while also giving the opposing defence a different look.

“We’ve played together for so long, so we can trust each other and we know what we want to do,” Furst noted of he and Glaud’s game-changing and abilities and rapport.

“We would read defences before the snap and pick them apart. It was fun. We would look for their better defenders and and Dillano would take them and block them to get them out of the play. If I got the ball, he would block for me, and if he got the ball I would block for him.”

Furst’s dedication and understanding of the game is rooted in his upbringing. His older half-brother Isaiah Letander is a former two-time winner of the WHSFL’s Kas Vidruk Lineman of the Year award, and as a result, he’s been around the game since he was three.

“We have a good connection, because we’re almost identical. We’re a lot alike,” mentioned Furst of his relationship with Letander.

Furst has been described by Valour quarterbacks and running backs coach Nathan Leitao as “super grounded” and “a grinder who loves to work.” He approaches every practice as an opportunity to learn and get better, and as indicated by his schedule, he never passes up an opportunity to improve his craft.

He usually has school and then practice, and then he’d have to do homework after. In his free time, he attends Football Manitoba camps and also plays flag football. Three seasons ago, in a further attempt to stay involved in the game, Furst started officiating, which is another reason for his high gridiron IQ.

“Onan is a one in 1000 player. He is an athlete that can play anywhere and succeed, and his IQ is amazing for his age,” added Leitao.

“It was like having an extension of me on the field. The guy was so special he could make quarterback sneaks go for 50 yards at a time. His work ethic is amazing also. Even as one of our best guys he was always trying to get better, putting in work with various programs. Some guys let the talent get to their head, but not him. It is great to have a guy like that repping the west end.”

A soft-spoken person off of the field, Furst – who is one of the first players at any given field warming up – comes alive when the whistle blows. In that regard, the game has granted him the opportunity to improve his interpersonal skills.

“Definitely confidence is one thing football has helped with,” he says.

“On the field I’m all talk and I’m loud, and I’m helping everybody, but off the field I’m more of a quiet guy. I’m two different people when I’m on the field compared to off of it. Football has helped me meet new people and gain a lot of confidence. Overall, football has made a huge impact on my life.”

After close to two years away from tackle football, Furst cannot wait to make his high school debut with the Raiders. He already knows certain members of the coaching staff, such as Raiders alum Aaron Giesbrecht, and is hungry to prove what he’s got.

“Just high school football in general, I just can’t wait to play. It’s going to be fun, especially after two years off. Before we went into lockdown I would do training with [the team], so I know the guys pretty well. Coach Gies I’ve had him for a Big Air camp before so I know him pretty well. Most of the coaches there he’s had at Big Air camps so I know them pretty well too.”