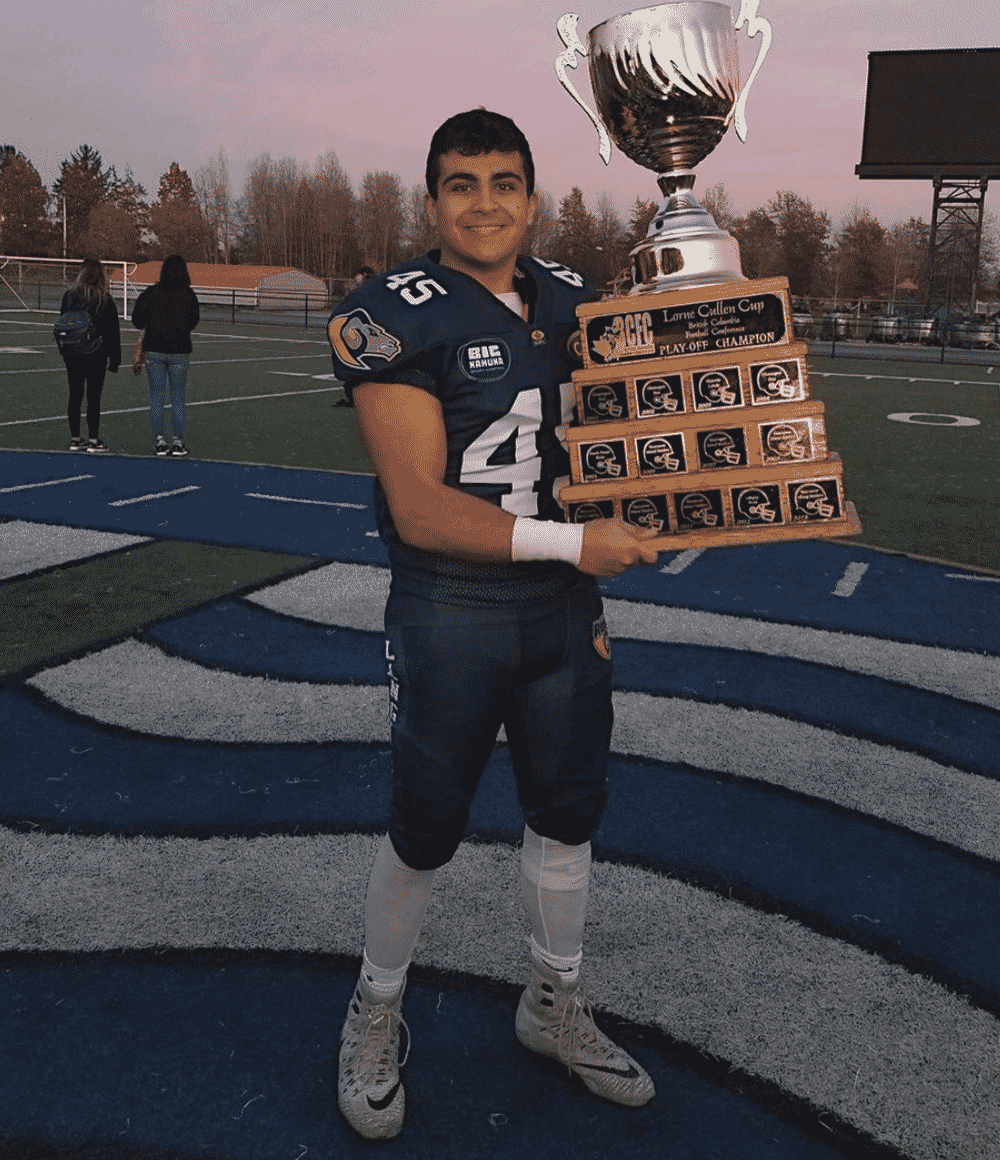 Raffaele Caligiuri: One man, one job

Whether he’s on the gridiron, in the classroom or teaching others, Raffaele Caligiuri seeks excellence in everything that he does. The results have shown in all aspects of his life. He’s currently attending the University of Manitoba with an interest in kinesiology, made an immediate impact with the CJFL’s Langley Rams in 2019 and is a mentor to others as part of Pro Prep Academy.

“Put the hours in, and it will treat you,” he says of his work ethic. “Whether it’s on the field, in the books, if you can keep yourself sharp in every situation, you’re going to put yourself in a great place to succeed.”

Caligiuri’s roots in football can be traced to the Greendell Falcons, where he played all over the front seven, embracing the mantra of one man, one job.

“I learned that right from the beginning of football,” the mature athlete says.

“Our coaches would basically say you have a job on your unit. If you do your job, you’re going to be successful. Fill the gap, cover the guy, that’s what you’ve got to do. Fill in your lane. Don’t try to overstep just to be a star. One man, one job is what I’ve always lived by.”

Caligiuri transitioned well to the high school game. A starter from grade ten on, he lined up in multiple positions, helping form the base of a Lancers defence that advanced to the Division 1 championship in his junior year. The addition of Reid Vankoughnett under centre made an immense difference as well, as the program went from 1-6 in 2016 to the final the year after.

The linebacking corps was led by senior Noah Paulic (now with the Manitoba Bisons), while Caligiuri played a hybrid defensive end/linebacker role. Sophomore Josh Ma, at 5’7” and near 200 pounds, was “a tank,” and was one of the league’s best at plugging gaps in the run game. lThey were just three pieces to a veteran defence that allowed seven points or less in half of their regular season games.

“We wanted to change how everyone looked at us,” noted Caligiuri of the turnaround from 2016.

“We were going to compete and play smash mouth football and show that we’re a different type of team. It all started with the seniors. They pushed us. Noah, for example, pushed me and Josh Ma to be better. [Defensive backs] Scott Brakel, Nick Conway, Andreas [Kastellanos], everyone pushed us. That started everything.”

St. Paul’s bested the Lancers in the ANAVETS Bowl in 2017, leaving the incoming seniors hungry for more the following year. Caligiuri, a captain, preached accountability all season long.

“I made sure everyone knew their job. Film study is one of the most important things. You can be a great athlete, but if you don’t know what’s going on in film, you’re going to be useless out there,” he noted.

“We all studied film, I made sure the boys would get into it. Then we went over the plays, because if you don’t know them, you’re going to be like a chicken with its head cut off. Then, just working like a team. No taking plays off. If you want to be a top team, you can’t be sluggish out there even if it’s practice.”

The results showed. Dakota pitched three shutouts in 2018, with Caligiuri lining up in a multitude of positions. He was particularly impressive in the pass game, showing his range in both man and zone coverage.

The Lancers fell short in a 22-3 loss to the Cru in the semi-finals, but the legacy Caligiuri and company left lasts to this day. In 2019, Dakota had their best-ever regular season finish at 6-1, thanks in part to the contributions of a defence that was moulded by the efforts of its alumni.

Buying into the culture in Langley

Caligiuri had interest from schools at the U SPORTS level, but chose to begin his post-high school career at the junior level. He couldn’t have picked a better place to start, signing with the Langley Rams, who were the defending Cullen Cup champs entering 2019, and had been to 13 BCFC title games overall.

“I didn’t feel it was the best route for me to sit for a while, and probably not play. I wanted to get more experience and build myself as a player, so I decided to look around the junior game,” he recalled.

“A lot of places had reached out and talked to me about recruitment. I was looking at different teams, what their rosters looked like and how they did last year, and Langley had gotten a hold of me multiple times. We talked a lot. I sent them my film and they wanted me to come down for their rookie camp.”

Caligiuri bought into the Rams’ culture, led by veteran BCFC coach Howie Zaron, right away. At 17, he was the youngest linebacker, but his work ethic meshed perfectly with a Rams’ defence that was relentless in their pursuit of perfection.

The group had a number of U SPORTS veterans who flew to the football, including captain Cole Barron, Isaiah Okoli and Caleb Abraham. Barron led the team with 6.5 sacks, wreaking havoc for a hybrid 3-4 defence that was full of athletes. On one particular play, Barron barrel rolled through a Valley Huskers guard, resulting in a sack for teammate Partap Sandhu.

“We had a lot of guys who could either blitz or drop back into coverage. We would play match, or zone on one side and man on the other. It was amazing the stuff [defensive coordinator Chris Butschler] came up with,” added Caligiuri.

“In high school you have a couple plays, but in junior we had a book. You had to watch film, if you didn’t you were going to fall behind. It wasn’t difficult, but it was definitely something new having to know that many plays, and the hand signals on the sidelines, but it was still a great experience learning it from U SPORTS calibre players.”

Caligiuri started a handful of games as a rookie, but he also showed his worth on special teams. He played on every unit, and was second on the team with 8.5 special teams tackles. He was also an important part of a kick and punt return unit that led the way for the elusive Sebastien Reid, Jay Jay Jackson and Jarryd Taylor. The trio combined for close to 800 punt return yards and two scores, while Jackson and Reid both averaged over 25 yards per kick return.

We had a lot of blocking schemes on either punt return or kickoff return. We’d obviously look through film and see what the tendencies of the punt and kickoff teams were. We’d use that against them and run it down their throat. The returners trusted us. I was part of the wall sometimes, and they knew we could get the job done and spring them loose. It happened a lot.”

Langley ran the table, advancing to the Canadian Bowl, where they were stymied by Saskatoon for a second year in a row in a defensive battle. Nonetheless, the Rams shut out their opposition on four different occasions along the way, while running back Andrew Pocrnic set a new CJFL record with 26 rushing touchdowns and Duncan Little threw for 1.987 yards and 20 scores.

With two straight appearances in the national final under their belts, Caligiuri and the Rams had high hopes for the 2020 season. Then COVID-19 happened. Forced to play the waiting game, the Lancers alum returned home, and has been grinding ever since as he awaits the return of tackle football.

In the meantime, the student-athlete has stayed sharp thanks to Pro Prep Academy. He’s currently working on his technique in the passing game, receiving tutelage from three generations of St. Paul’s linebackers in Eric Vincent (Manitoba Bisons and Winnipeg Rifles alum), Brody Williams (current Manitoba Bisons linebacker) and Pro Prep co-founder DJ Lalama (current CFL player), the latter of whom Caligiuri has been training with for a number of years.

“Brody, I feel like I can relate to him more. He teaches me a lot about stuff that’s going on him with him, so it’s great to learn from someone who’s at the level that I’m trying to make it to. Then I’ve got DJ who’s in the CFL, so I’ve got all different calibres of football players teaching me. It’s the best of both worlds. Coach Vincent, he breaks down everything. He’ll tell you everything you need to know. Every single thing I do, he knows what to tell me, and all three of them work together to help make me become the best player I can.”