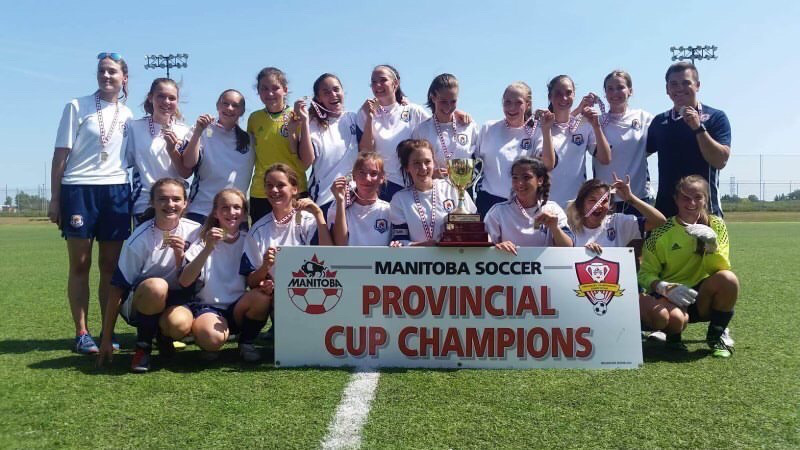 Trust, confidence and belief are three keys in developing a winning culture. Take the 2019
Montreal Alouettes for example. They finished with a 10-8 regular season record – their best
since 2012 – a year after ending 5-13. First-year head coach Khari Jones was instrumental in his
team’s success. He developed a bond with every player that went beyond the field, and the
team bought in.

Steve Dreger, a well-respected coach in the Manitoba soccer scene, holds similar values to
those of Jones.

“I don’t think I’ve ever yelled at a team before. I don’t really subscribe to those methods. My
main thing for every team I’ve coached is instilling confidence in players. That’s what’s always
worked for me. I think that goes beyond soccer. If you have a confident player or a confident
person, you’re going to have more fun and be more successful. It’s not all about wins and
losses, it’s about enjoying your time.”

In 2018, Dreger, who was coaching with Bonivital, found himself in a similar position to that of
Jones. But while the former took over as bench boss with Montreal six days prior to the start of
the season, the latter was thrust into a coaching role two games into the indoor season.

Luckily, he knew the roster well.

“I had coached this age group when they were ten and 11. Then I wanted to switch to my other
niece’s age group and she’s younger. I knew them all, and my niece was on the team as well.
Going to watch them play every once in a while, they were always super talented. I got a call
from someone within the club and one of the parents saying ‘hey, would you be interested in
helping with the U14 team?’ This was indoor at the time. I said, I’ll have to coach two teams at
once but I think I can make it work.”

Despite falling on hard times over the last few seasons, the group, as Dreger said, was talented.
A number of athletes on the roster will be playing U SPORTS soccer in 2021, including Jessica
Chow (Regina), Peyton Enns (Regina), Elana Kressock (Western), Tessa Albi (Manitoba), Iris Bjornson (Manitoba) and Erin
Stewart (Trinity Western).

Dreger showed his belief in the team from day one.

“There was a practice we had at a school gym on a cold winter night, and before we got any
drills going, we had a team meeting. This was my first time talking to the team and basically I
said let’s set our goals now to start a journey to get to the provincial finals and win the MSA
Cup,” he recalled.

“That’s going to be our goal, and if we all collectively have that as our goal, we’ll get there.”

The comment was brushed off by a few of the players at the time. Having won less than a
handful of games over the last two seasons, their confidence was lacking.

“I remember a couple of players kind of laughed and were having fun with the idea,” Dreger
noted. “I finished off by saying there’s so much talent on this team. This is not a team that’s 1-
22, we just all have to be on the same page.”

The team slowly rebuilt as the indoor season continued. They finished with a .500 record, and
started to believe what Dreger had been telling them all along. When outdoor rolled around,
they were unstoppable.

Bonivital’s U15 group started the season with ten wins, holding onto first place all through the
regular season. They were paced by 12 goals from Albi, a Winnipeg South End United transfer,
as well as ten from Peyton Enns.

Enns’ scoring touch was consistent at the premier level. She scored double digit goals each of
the prior two years prior and was incredibly tough to defend due to her speed. Her biggest
opponent was her anxiety, which she’s battled with her whole life.

“In rec soccer and the developmental years, I just really was so anxious,” she says. “I had to
take breaks from soccer sometimes and sometimes I wouldn’t even want to go to games,
because it would make me so anxious just to think about it.”

Seeing a sports psychologist helped, but so did Dreger, whose positivity and belief in her did
wonders.

“I had him for one year prior, and I thought he was so fun,” she says.

“He was really positive, and that was the biggest thing. He definitely had a lot more energy and
positivity than most coaches I’d had, and so him coming in for our U15 team, I think that really
helped change things around. Before, we didn’t have much positivity or energy at all, and he
really emphasized that and helped us feel more confident in ourselves. It was the first time in a
while that I’d felt that much confidence.”

Roster full of leaders
Bonivital’s roster was filled with leaders, both on and off the pitch. Co-captains Jessica Chow
and Erin Stewart were excellent motivators who built others up. They did whatever was needed
to help their team succeed, which included a positional switch at one point for Stewart.

“Our team needed a little bit of help in the defensive line at one point. I asked Erin to move out
of her favourite attacking position to play more of a centre back and at times fullback role,”
says Dreger.

“That was a big ask, and Erin always put the team first. She was definitely a versatile player. She
could play anywhere on the field, she’s super coachable.”

Bjornson was another difference-maker on the field and in the community.
Capable of playing either fullback or centre back, she motivated others due to her work ethic
and fearlessness. Off the pitch, she was responsible for the team’s outreach at Siloam Mission.

“When I’m driving to the north end complex for Valour three times a week, and I see the less
fortunate and I always feel really bad. If I have a Cliff Bar for after practice, I’ll sometimes give it to whoever is right there with a sign, just because I can wait the extra 30 minutes and they need it more than I do,” she says.

Stylistically, the team kept it simple by playing a possession game. They battled their way to the
MSA Cup, where they faced well-known rival St. Charles. The game was scoreless until Enns
came up clutch, just like she had all season.

“Basically, she was on a mission,” recalled Dreger.

“She was very strong on the ball and always threatening to get in behind the opponent’s
defence. The goal was pretty spectacular. It wasn’t just a tap-in. It was Peyton at her finest. She
was full-speed, ended up getting past the defender and was on-on-one with a really, really
strong goalkeeper. She was able to get a good angle on her using her speed and found the back
of the net. It was awesome. Peyton was definitely a big game player. She had a whole different
level that she could get to, and her speed is just insane.”

Enns’ goal was the lone marker in the contest, with Dreger’s statement from over a year ago
coming true. It’s a testament to the power of sport, and what positivity and belief can do.

“That first meeting, when Steve first told us we were going to go to nationals, I kid you not, we
all laughed, but he believed it could happen,” noted Bjornson.

“He built up our team, and I think we lost three games or four games that season, but we
started winning up from there and were provincial champs. The same year, we got to go to
nationals. That was probably the best experience. We got there, and we were like you were
right. We don’t know how you did it, but you motivated our team and pushed us to hard to get
to where we are. It was just amazing.”

“It wasn’t all about results,” added Dreger.

“We were confident in how we were playing and were really enjoying our team experience and
overall just loving being a tight-knit group. It was really neat to know that we accomplished that
goal that we set back in a gym on a cold winter night a year-and-a-half ago.”