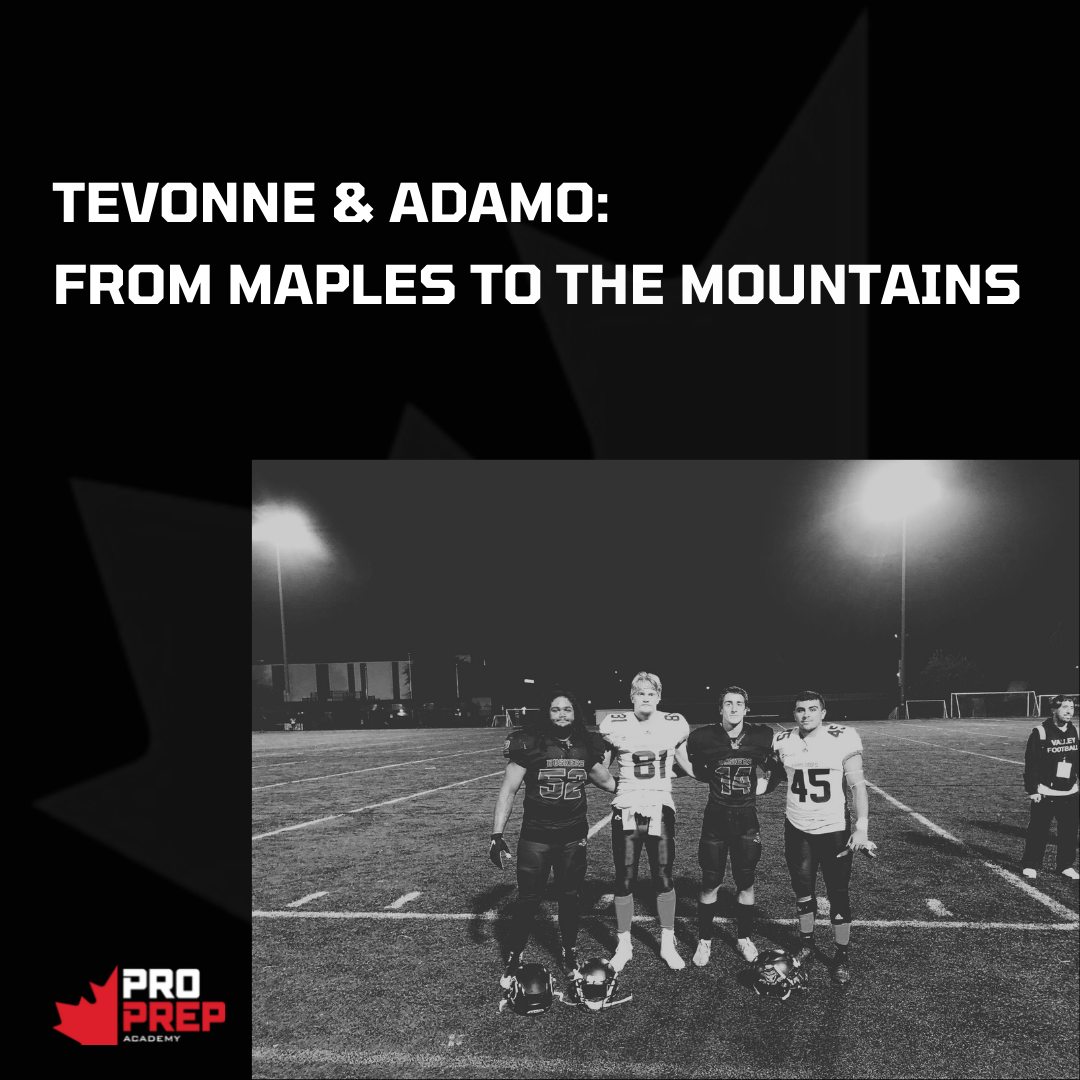 Tevonne & Adamo: From Maples to the Mountains

In roughly four years, defensive back Adamo Urciuoli went from raw prospect to player of the year for the WHSFL’s Maples Marauders. Driven by a nonstop work ethic and relentless desire to improve, he earned a roster spot after high school with the CJFL’s Valley Huskers in BC. The COVID-19 pandemic derailed his debut with the team, but it didn’t halt his progress. Along with Maples teammate and former Lineman of the Year Tevonne Albert, the pair worked nonstop for a year-and-a-half in order to be ready for their junior football debuts.

The pair worked during the day from 7 am to 3 pm throughout the pandemic, but still found time to get better. They’d hit the gym for close to three hours, and then go to the field until 10 or 10:30 pm. The duo also trained on Saturdays with Valley’s offensive coordinator and general manager Blair Atkinson, while getting in further work on their technique as part of Pro Prep’s spring football academy.

“[The academy] helped a lot actually,” noted Albert. “In high school I didn’t go over a lot of things that [Andy] Williams taught me, like gap control and reading mesh points and a bunch of stuff like that. If I didn’t train with him at that time, I’d be at a big disadvantage coming into the season.”

For Urciuoli, the emphasis during the academy was on patience and reading the opposing receiver.

“They saw that I would backpedal super quick, open up my hips and the receiver would just break underneath. They told me to trust my athleticism and to be patient and react once the receiver breaks out,” he says.

“I think that’s the biggest thing I took away once they told me. I’ve just been using that since training camp started and it’s really helped me. Once you slow down and are patient as a defensive back, it helps so much.”

Urciuoli played halfback for the Marauders in high school, but was being looked at at the safety position with Valley due to his range and tackling ability. When camp rolled around though, he was shifted to field corner – a position that typically sees a bit less action than the boundary side – where he put his newfound skills to the test. The work paid off as Urciuoli has been the team’s starter each of the first three weeks while also making a difference on kickoff and punt return.

“Coming from Maples, a low division straight into the CJFL, to play [field corner], there’s not as much action but you’re still on the field and you’re learning and adapting to the change in competition. It’s a big change moving to the CJFL and that’s what my coach told me. I think it’s a good place to start and to learn,” he says.

“It feels good. I know I put in the work during the offseason, so I was really confident coming into this season to at least be starting on special teams for sure. To also be starting on defence is really good for me, but I knew I was prepared and ready for it.”

The Huskers have a few veterans in front of Albert on the defensive line, but he’s still earned playing time as an active member on special teams. That’s no surprise when you look at his career at Maples. He never left the field as a senior, playing on every special teams unit, offence and defence.

“I was able to find my way in pretty well. I’m on a lot of special teams, because that’s where I know I can provide a lot of help. I’m just trying to help out where I can and where I know I can be beneficial. I wanted to play on every special teams unit that I could. I just love being on the field, I don’t like being off of it. If there’s something I knew I could do, then I wanted to do it.”

Urciuoli and Albert were reunited with former Maples teammate Hunter Brown, as well as Team Manitoba Prospects alum Ethan Schnerch during their week two victory against Kamloops. Fellow Pro Prep athlete Raffaele Caligiuri is also a member of the Broncos, and is one of a at least a half dozen Manitoba athletes who’ve been showing out in the BCFC.

“It’s great that people from Winnipeg are able to make a career or themselves out west,” Albert says.

“I didn’t really think of that until I got contacted by the Valley Huskers. It’s just crazy to think about. You never really expect someone so far to have their eyes on you. It’s a huge change from Winnipeg where everything is kind of flat. You look up and all you see is the sky, but here there are mountains around and a bunch of trees and greenery. It’s beautiful out here.”