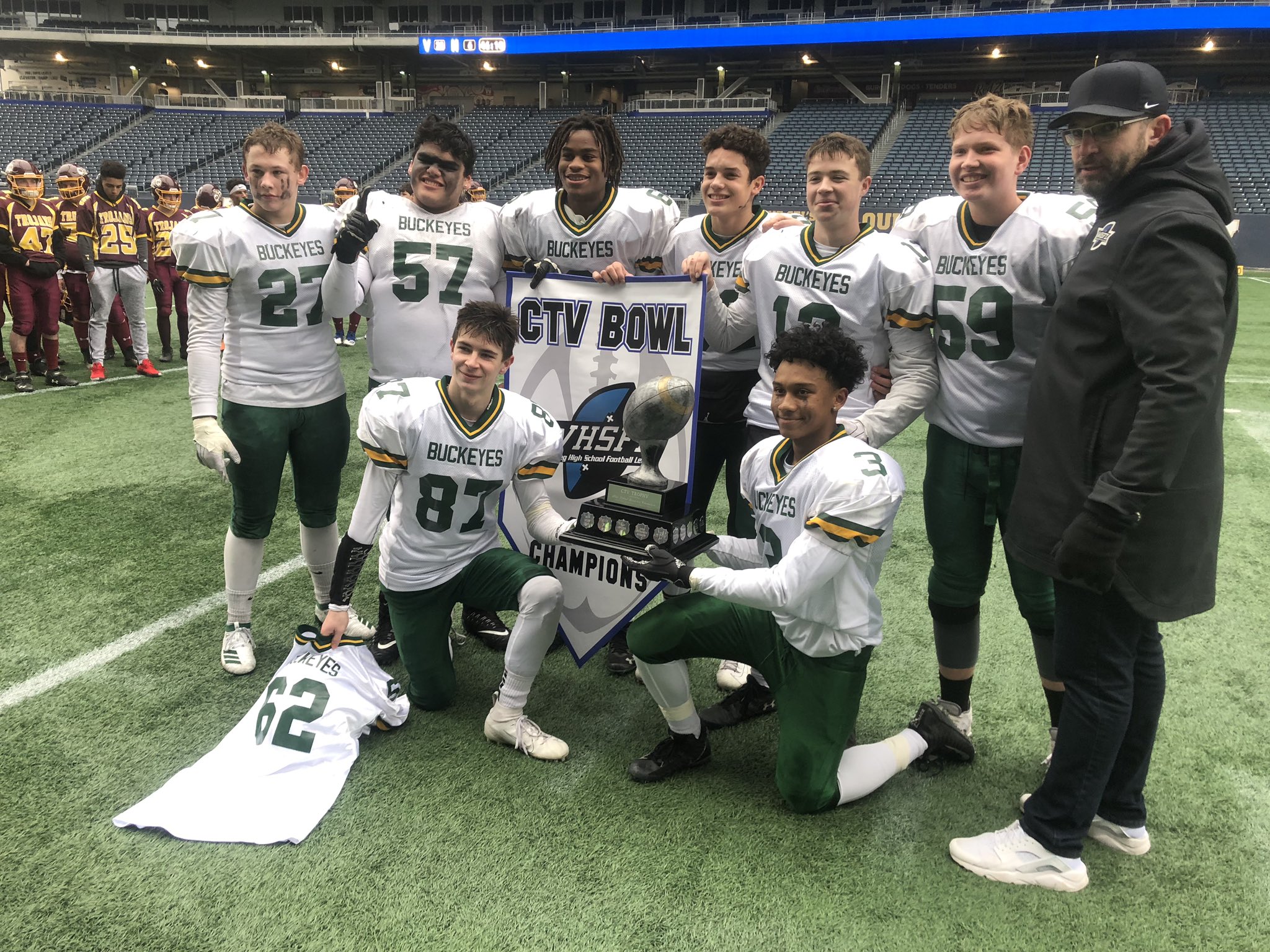 In sports, developing a winning culture takes time. It takes successes and failures, and the maturity to handle the highs and lows.

The Miles Mac Buckeyes football team endured many lows in 2017. The Division 2 squad in the Winnipeg High School Football League didn’t win a game that year, but they kept building. They continued to trust the process in 2018, winning two games towards the tail end of the season. By the time 2019 rolled around, they were battled-tested.

The Buckeyes boasted the league’s best defence, allowing less than 50 points all year along with four shutouts. Grade 11 middle linebacker Evan Rollwagen, a starter since his freshman year, helped pace the group with 41 tackles, four sacks and three forced fumbles while Matt Graham, another grade 11 veteran, anchored the offence at quarterback with 1295 all-purpose yards and 26 touchdowns.

A key reason for the team’s success was their chemistry. Throughout the losing seasons, they’d built up a hard-working, team-first mentality which was seen both on and off the field.

“We had those losing seasons, which brought a lot of character to the team and it brought out the best in each person. It also brought out the weakest people that just left the team after that because they didn’t want to lose,” noted Graham.

“After that, we thought we’ve got to get our stuff together and we combined as a team and we started hanging out more and brought that camaraderie. We had Boston Pizza nights after every game as a team bonding experience, and we all shared stories and became brothers. That translated to the field. Everybody was making plays and they really just wanted to win.”

“It’s kind of basic and everyone says it, but I really felt that these guys were my brothers,” added Nathan Udoh, a senior in 2019 who played on both sides of the ball as well as special teams.

“We challenged each other to be the best no matter what position we were. From the moment we got to school, lunch periods and getting ready for practice, we’re always together working on our craft, making jokes and just being boys. It definitely showed up in the game.”

Diligent film study was key in Graham’s progression as a pivot, but just as valuable was his experience on Team Manitoba earlier that summer. He made the squad as a defensive back, which helped him familiarize the tendencies of not just his position, but the defence as a whole.

“[U18] really helped me with my pre-snap reads. It was high-intensity football, so it gave me more knowledge of where people were dropping into zones and where they would shift. When you’re at 18, you go over every position in the defence, and so it just helps you with your knowledge and understanding of the defence in general.”

The 6’2”, 180-pound Udoh also earned a roster spot at receiver. The experience was immensely valuable for developing his overall skill-set, as he’d picked the game up just one year prior, having played premier-level soccer previously. Specifically, he felt that the U18 process helped him refine his catch radius.

The results showed, as Udoh led the squad with 336 yards during the regular season, along with 14 tackles and an interception as a defensive back. He also tallied 238 punt return yards. These statistics are even more impressive considering the fact that Udoh bad to battle back from a broken collarbone suffered during the Canada Cup.

“In terms of the process of recovery, apparently it was pretty quick. It only took a month. I got lucky with my surgery being so early. I think it was about three weeks after I had broken it. I got the surgery done and then a month after the surgery, I was back in shoulder pads, so I thank God for keeping me safe and giving me a fast recovery,” recalled the first-year Manitoba Bisons pass catcher.

“When I got to my senior year, you know, my goal was to catch everything that came to me. I’d say I was pretty successful for the most part. And then it would be the YAC yards, which are very important to receiving. I knew I had some athleticism over some defensive backs, so I tried to use that to my advantage as well.”

Along with Graham and Udoh, Rollwagen, receiver Miciah Stone and offensive lineman Carson Chamberlain-Brass also made the U18 squad. That group bonded immensely throughout the summer, and were locked in come fall. The Buckeyes went 6-1 during the regular season, with their only loss coming against the Portage Trojans, easily the biggest squad in Division 2.

Portage, a dominant squad under third-year head coach Donald Burrell, rolled through most of their competition that year, utilizing a few extra blockers up front to create holes for running back Kyler Banfield. Quarterback Ian McCutchin was also a capable runner who had plenty of weapons to throw the ball to.

Portage erupted to a three-score lead in the first half, but the Buckeyes fought back. They trimmed the lead to 23-21 late, but were unable to score on a two-point convert.

“We got close. We had a special team’s touchdown we ran all the way back, but they called a flag on us,” recalled Udoh. “So, you know, the game could’ve gone either way. But, you know, at the end of the day, I was just proud of my team for being able to make that come back.It was a really exciting game.”

In fitting fashion, the two teams met again in the CTV Bowl. There were some first-half jitters for the Buckeyes, most of whom have never played in a championship before, but they settled down in the second half.

Offensively, the Buckeyes mixed up their play-calling, keeping the Trojans on their toes with option plays, screen passes and the deep ball. Graham struggled with a few of Portage’s pressure looks early, but didn’t get flustered. He threw three touchdown passes and was named game MVP, as Miles Mac erased a 6-0 halftime deficit to win 28-6.

“If you’re the quarterback, you’re supposed to be a leader on the team. And if you’re going down, a lot of other teammates are going to see that and they’re going to have that same negative effect, so you always have to have a positive mindset when you’re running a play, regardless as to whether it goes bad or well. I just tried to make the best plays I could to help my team in any way.”

Defensively, the key play occurred with 1:52 left in the third quarter. Miles Mac was up 7-6, however the Trojans were in the red zone after a long pass to receiver Colby Irwin, who lined up all over the field for his side. Faced with a third and one, Portage chose to go for it.

The play developed perfectly. Irwin snuck underneath Udoh from his tight end position and was wide open, but he never got a chance at the ball. The reason for that was defensive tackle Seth McDonald, a Manitoba Bisons commit who played both ways. He fought off his block and got his mitt in the air to knock the ball down. Miles Mac scored on the next drive, their first of three majors in the fourth.

After the play, a visibly amped-up Udoh pointed right at his teammate and dapped him up.

“I don’t feel like I play gets talked about enough to be honest,” he says.

“I was about five yards behind the receiver that the quarterback was trying to throw to. I saw it play out and I just saw Seth come out of nowhere and knock the ball down. I knew he just saved me. If the receiver had gotten that, I probably wouldn’t have gotten to him until he was inside of the five. They would’ve had great field position, so that bat down was huge for us. After that happened, I felt like the momentum totally switched.”

Postgame, Buckeyes head coach Dan Washnuk called McDonald’s performance in the contest a “microcosm of the season he’s had.” He was a player that took a year off but, came back, embraced his role and went to work. In doing so, he, along with a boatload of other seasoned veterans who’d endured many losses, brought the school its first championship since 2005.

“You can pull it off and win if you have the right mindset and the right mentality to go into your practices and your games with everything you got,” Graham, who’s continuing his career with the Winnipeg Rifles says.

“Hopefully that comes down to the players younger than us, and they can pass that down to other people too, so we can continue that same mentality and that mindset.”