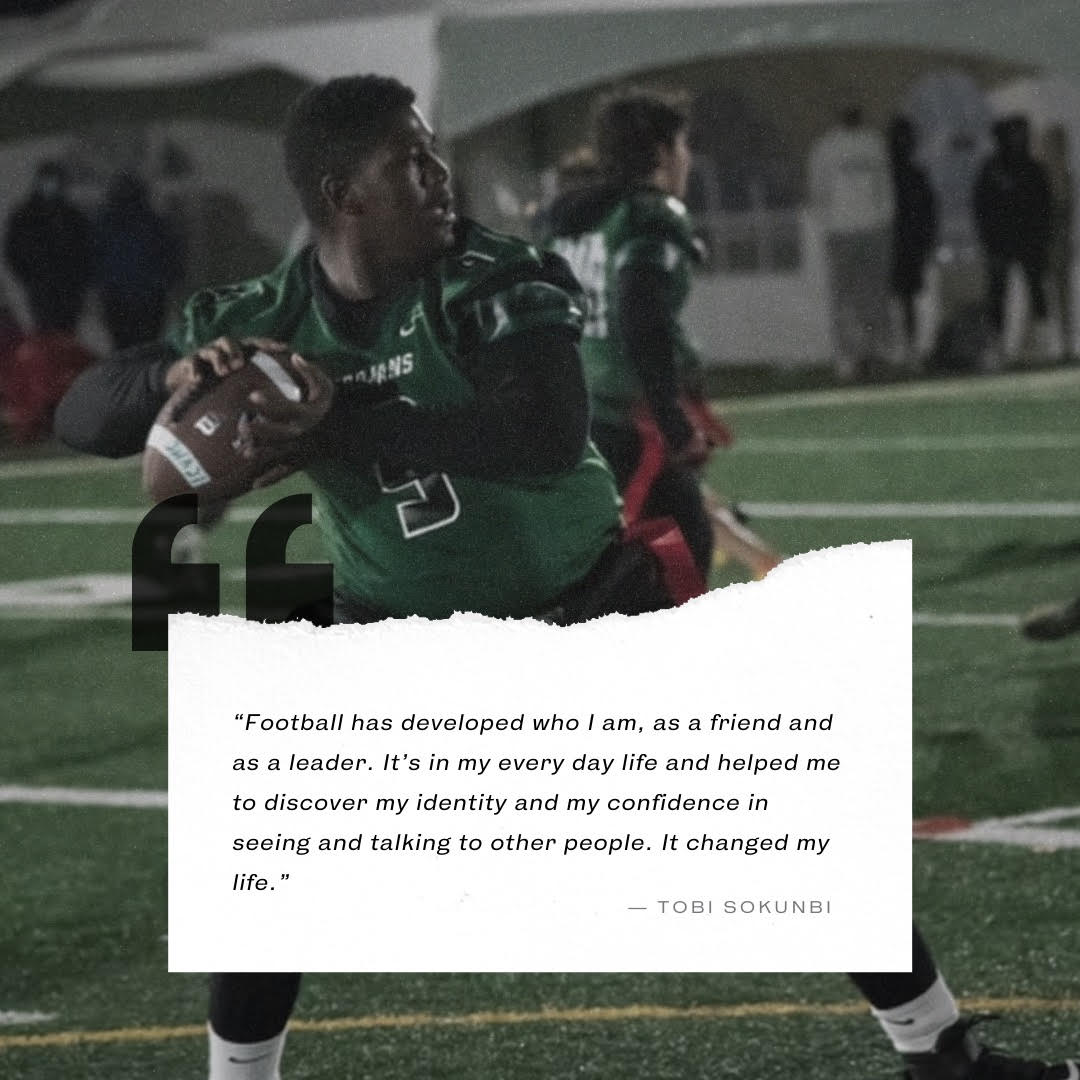 In 2015, Nigeria native Tobi Sokunbi packed up his bags and moved to Canada with his family. He was in grade five at the time, and while he felt confident in the classroom, making friends didn’t come as easily.

“Back in Nigeria the educational system is two years ahead. I moved here in grade five, but I already had grade seven knowledge, so the school work was pretty easy, but making friends wasn’t, because I was a shy kid back then,” he says. “Talking to people and getting to know them was pretty hard for me.”

Admittedly, he wasn’t an athlete growing up, and hadn’t heard of the sport prior to coming to Canada. His older brother Mobolaji’s friends were all playing though, so the elder Sokunbi decided to try it out.

“I kind of wanted to be involved and do what he was doing,” recalled Tobi. At first, my parents didn’t like the sport, because they heard stuff about injuries and they were worried about the contact. My brother convinced them.”

The younger Sokunbi’s debut came at the peewee level with the Fort Garry Lions, a proud organization with over 60 years of history in the Manitoba Minor Football Association (MMFA). Because he had a bigger build, he was placed on the offensive line.

“The pads felt really weird,” chuckled Sokunbi. “It was hard to move at first, but I just went out there.

Sokunbi learned plenty of skills in his first MMFA game, as he developed his footwork and overall technique. But the most valuable thing he gained was confidence.

“I was shy, so I didn’t want to ask the coaches if what I was doing was right or wrong. At the game, I got knocked down once and I was like no, this isn’t happening again, so I asked the coaches. From there, it just clicked.”

Off the field, Sokunbi bonded with his fellow Lions.

“Sports really helped, because I played peewee football with my friends. They introduced me to other friends and then we all became friends. That gave me the confidence to be able to talk to other people. Sports, and reaching out to other people helped a lot.”

In 2019, just one year after taking up football, Sokunbi was a leader for his squad up front. Fort Garry also advanced to finals, knocking off St. James in come-from-behind fashion in the final two minutes to get there.

“It was mostly a new team. The line was mostly new and not a lot of guys had experience. Same with me, but I picked it up pretty fast so they felt comfortable talking to me about what to do,” says Sokunbi.

“The coaches instilled a mindset of not giving up until the whistle blew. The coaches would always say ‘there’s 48 minutes in a game. Just play the 48 minutes you have on the field until the last whistle.’ That’s what we did the whole season.”

This past year was supposed to be Sokunbi’s debut at the WHSFL level for Vincent Massey Collegiate, however the season was cancelled due to COVID-19. Sensing a void in the community without tackle football, Pro Prep Academy co-founders DJ Lalama and Andrew Harris started up the Pro Prep Flag Football League (PPFFL).

Massey entered four teams into the PPFFL, and needed a quarterback for one of the JV squads. Stepping outside of his comfort zone, Sokunbi volunteered to be the signal-caller.

“There was no one else who could throw. I was also pretty confident that I could do a good job, and I was the leader of the o-line at Fort Garry for those years and I thought okay, maybe I could do something here. I’m more of a goofy, easy-going guy, but when I need to, I can be assertive.”

The offensive lineman showcased his athleticism, scoring numerous touchdowns with his legs for a determined ICVMC 4 roster. Sokunbi earned Second Team All-Star honours for his efforts, while acknowledging the impact that tackle football had in his overall fitness level.

“I’ve gained more cardio and muscle. Before, I would be gassed going up a flight of stairs, but now I can run when there’s an opening on the field and be ready to go for the next play without feeling anything.”

Sokunbi, who hopes to go pro in the sport one day, is eagerly awaiting the return of football. In the meantime, he’s been training with Mobolaj, a running back, doing ladder drills and other agility work. In school, he has interests in science, math and woodworking, and is grateful for all the friends he’s gained not only at VMC, but across the city, through football.

“Football has developed who I am, as a friend and as a leader. It’s in my every day life and helped me to discover my identity and my confidence in seeing and talking to other people. It changed my life.”