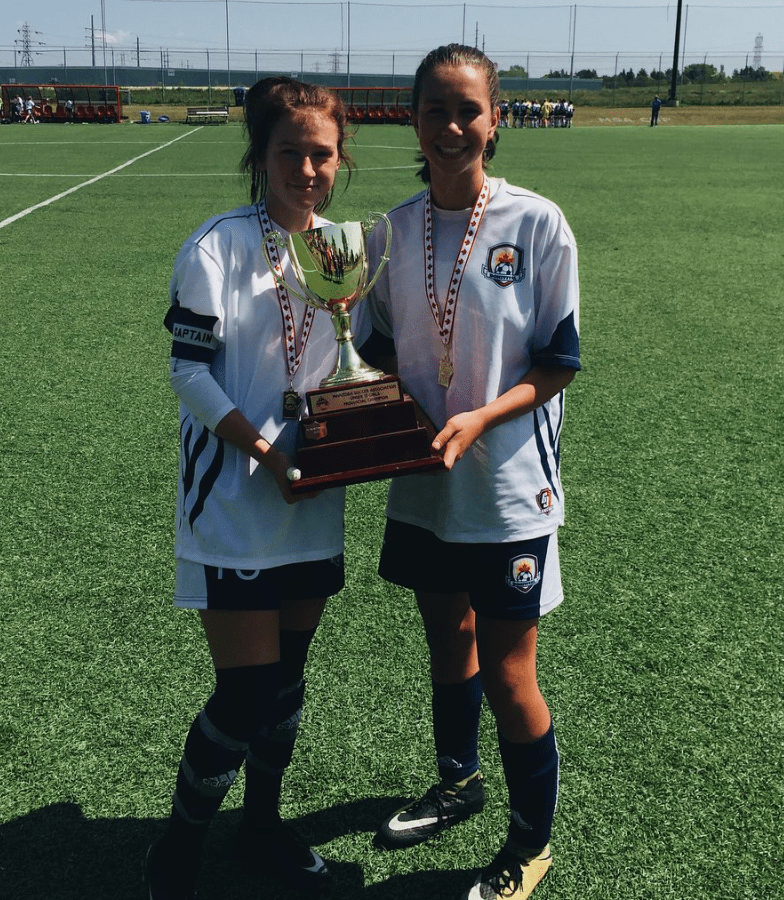 Trinity Western commit Erin Stewart has been the captain on many soccer teams she’s played for over the years, and it’s easy to see why.

On the pitch, the holding midfielder/fullback is versatile. She has an exceptional shot and great vision as an attacker, but can also play in the back line as a more than capable defender, something she did in 2018 for her Bonivital Flames squad that won the MSA Cup. She’s an even better person off the pitch. Her positive attitude and outgoing personality earned her the respect of her teammates, coaches and opponents over the years.

“She was super positive and was always trying to build up people around her. Going to practices, she’d always be one of the first ones there and was always really positive when people were arriving,” recalled Steve Dreger, who coached Stewart’s U15 club.

“She always had a smile on her face. She’s a charismatic person and really funny, so she knew how to make other people laugh and be in a good mood. She really gelled the team off the field.”

“I’ve always been pretty outgoing, and very hey, how’s it going, what are you up to? That’s always been me,” added Stewart.

“I think when Steve came by, him and I just really, really clicked because that’s how I was. When the girls came and put their bags down, I’d say hey, come on over.”

Commitment and comradery are two words that immediately come to mind when discussing Stewart’s club career with Bonivital. She played with half of the roster all the way from U9 up, enduring some challenging seasons before reaching the pinnacle a few years ago.

“I felt so fortunate to be with those girls, because we’d been together through thick and thin. I think everyone is their own worst enemy, and [Regina commit] Jessica [Chow] and [Western commit] Elana [Kressock] would talk to me and be like ‘you’re fine, don’t worry.’ We would all do that with each other. After a few messy passes you would just get down, and everyone would bring you back up,” she says.

“We never really won many games before U15, I don’t think we ever made playoffs. Then, we got some transfers that year and all of a sudden we started winning, and Steve really put some confidence in us. We realized woah, this is achievable, we can do this. We actually lost our first game and some of us were a little down, but there were still two games until the finals, and we won those. All of us were bawling our eyes out on that field, because literally a year ago at that time we weren’t playing in the playoffs at all. It was insane.”

Stewart is no stranger to big-time games. She’s played age advanced at nationals as a call-up in the past, and has also represented Valour FC Elite and the Canada Soccer Manitoba Regional Excel (REX) Centre. She credits Dreger, Malcolm Mitchell and Rob Ratcliffe from Bonivital, as well as Adam Mooi and Chris Lourenco from the REX, Team Manitoba coach Ron Jones and Valour FC’s Jim Zinko and Trevor Kidd for her development.

Valour was particularly helpful during Stewart’s recruitment process to Trinity Western, which

took place roughly two years ago. Their coach Graham Roxburgh had seen her play and was impressed, which led to a visit in the fall of 2019. Stewart signed in April of 2020, leaning on guidance from Zinko all the way through.

“I think [Valour] really look at both sides, and when you tell them what you want, they always helped you out. I still called Jim up in April when I was signing. He’d tell you what he thought, but he always made you answer first. He’d say this is your life, what do you think you should do? I think that’s what all of us girls liked. He made us answer first, but he might just turn your head to look at things a different way or help navigate us in a different route.”

If the outgoing Stewart’s first trip to the school was any indication, she’s in for a thrilling next five years.

“I remember the team was just walking me everywhere. I actually went on senior weekend, so I really got a lot. They invited me to the get-together they had for the seniors and all the parents,” she says.

“From there I remember being on campus, and even just students and professors – I was alone for like five minutes and I didn’t really know what to do – and everyone was just like ‘are you okay? Are you supposed to go somewhere? I can walk you there.’ That really stood out to me. And I liked the small campus. I actually went into a psychology class and sat in it, and I loved the small class sizes. I think it’s about a 16 student to one teacher ratio.”

Stewart’s relentless work ethic is a perfect fit for a Spartans squad that’s consistently at the top of the standings in the Canada West conference. They’ve won five national championships under Roxburgh, as well as eight conference banners.

“I’m super excited to be the youngest, I’m super excited to be challenged,” she noted. “I’m the type of person where if I saw someone do a cool move, I’ll be like oh, I want to do that and I’ll go and do it, or try to do it anyways. I can’t wait to do that again. Yes, I want to play, but I’ve got to earn my spot. I’m just going to train as hard as I can and go into practice with no regrets after, and what will happen will happen.”

Leader in the community

The Bonivital standout is also a leader in her community. She’s coached U13 for the past fewyears and was the 2018 recipient of the Samantha Mason Friendship Award, which is presentedannually to high school students who “make a difference in their community by fosteringkindness, friendship and respect, vowing to never be a bully nor a bystander.”

“I felt really blessed,” she says.

“I feel really fortunate, because I feel like I wouldn’t have gotten that if it weren’t for my teammates and Steve. They helped me all the time, and giving back is just natural to me, because everyone gives so much to me. I was so honoured when Steve was there with me. I was really honoured. I still have the award there in my drawer.”

Whether it’s her achievements on the field or the lessons she teaches off of it, Stewart always returns to the values she learned as younger player for Bonivital. The club, along with her parents, have helped mould her into the hard-working and passionate person she is today.

“Not everything is just technical. It’s about having fun and that’s what I want to show my U13 girls right now. When you come to soccer, talk, and then a few minutes later let’s learn. I definitely think Bonivital, and the girls I’ve been with since U9 really taught me that.”