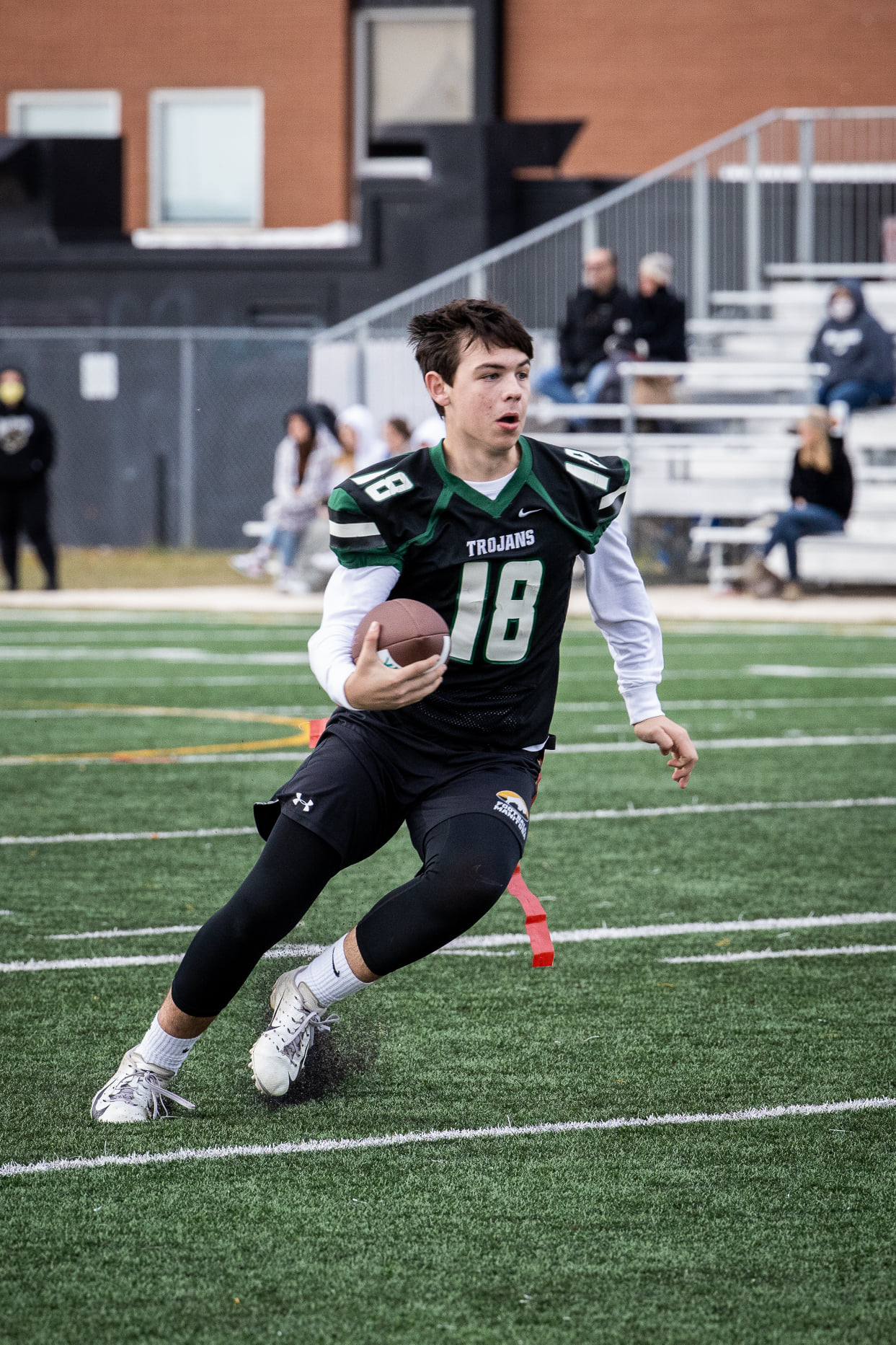 There have been many standout quarterbacks who’ve come through the Vincent Massey Trojans’ program over the last decade. Names such as Andreas Dueck (ANAVETS Bowl and Yates Cup champ), Jackson Tachinski (ANAVETS Bowl champ, Manitoba Bisons quarterback) and Jordan Hanslip (Manitoba Bisons quarterback) all come to mind. Dueck was “the most natural thrower of the three” according to head coach Kelsey McKay, while Tachinski was the “best athlete” and Hanslip was the “most polished.”

Incoming senior Luke Thalman is the next man up, and McKay believes that he’s a combination of all three of the above. Described by his head coach as a “tough leader and natural thrower who just wins,” he has a mature attitude, approaches the game with professionalism and displays many other traits that make him an instant leader.

“I think it’s important to be a leader. I just enjoy being one of the guys that everyone can come to with anything they need really. I like helping out my boys,” Thalman says.

“I try to stay as laid back as possible. I like to think that no moment is too big, that’s just kind of how I approach things. I always try to stay calm, especially in games.”

Thalman’s football career started in flag, where he made a name for himself as a running back, winning numerous titles at the provincial level. When he began playing tackle at age 12 with the Mustangs, he shifted to pivot in order to fill a void at the position. His dual-threat capabilities caused problems for the opposition, as he was shifty enough to evade blitzing defenders and was also capable of delivering an accurate ball with exceptional touch.

Thalman’s favourite target during his career has been Everett Reid, a do-it-all athlete who can play any offensive skill position and is also a threat on special teams. The pair – who’ve been best friends since they were two or three and “have been through the ringer together” – live a block away from each other in Royalwood, and have suited up together during provincial and national flag tournaments, as well as with the Mustangs and now the Trojans. Wherever they’ve gone, success has followed.

All signs pointed to a stellar high school debut for the pair in grade ten. Massey defeated St. Paul’s in junior varsity exhibition play, and the following week, Thalman and Reid put up significant numbers in their week one tilt against Dakota. But the course of the Trojans’ season was drastically altered a week later, as Thalman broke his wrist and elbow after being hit on a roll-out.

The injury was severe. The bone in the pivot’s wrist that was broken didn’t get a lot of blood flow, and surgery was nearly required. Three months were spent in a cast, and it took four months overall for the injury to heal. Instead of getting down though, Thalman showed his character by mentoring Reed, who was thrust into starting quarterback duties for the remainder of the year.

“Originally I just tried to stay there and help out Everett at the game,” Thalman recalled.

“I felt there was probably something wrong when [athletic therapist] Madi [Ridgen] had to go sprint inside to get a splint to hold my arm in place. I decided from there that I was going to take a different mindset for that season and to pretty much try to be the best leader that I could, and help out the boys by doing my part off of the field.”

Thalman played a major role in game-planning for his team. Along with aiding Reed, he formed a great relationship with offensive coordinator Jason Huclack, who taught him about the integrity and structure of an offence.

“[Reid] is my best bud and I knew I had to help out him and the team as much as I could, so I’d run through plays with him and what I’d look at, and I’d tell him what I saw during plays. I’d look at all the coverages during the game and I’d try and tell him what I’m seeing and ask if he was seeing it too,” he says.

“I also called some plays for him, with coach Huclack. It was just a great environment, and us three along with our quarterbacks coach Shane Latour were just awesome together. I ran some indy sessions too, it was great. I was still very involved despite being injured.”

It’s been over a year-and-half since Thalman’s injury happened, and as of this writing he is still waiting to make his varsity tackle debut. It’s no fault of his own, as the COVID-19 pandemic resulted in a lost grade 11 season, and the status of the 2021 campaign is also up in the air. Nonetheless, he’s kept working, crediting McKay for helping him along the way with his motion, mechanics and football IQ.

“Whenever we could, we found time to work on stuff. He’d always keep in touch with me and everyone else. He’s a great coach who makes sure that his players are up to date doing workouts, staying healthy and staying active. With him and I, he’s probably my favourite coach ever. He can give some tough love sometimes, but everyone knows that most coaches are like that.”

The Mustangs alum has also made a statement in the Pro Prep Flag Football League. His 1516 passing yards rank third in the varsity division, while his 25 majors are second. Additionally, he leads the team with four interceptions on defence, showcasing his abilities as a playmaker on both sides of the ball.

The well-spoken signal-caller has also had plenty of help from his relatives. For example, his uncle Jason George – who previously coached in the NFL for over a decade and is currently the Director of Integrated High Performance for Wake Forest’s football team – has been aiding him with his workouts.

“I got pretty lucky compared to most people. It’s awesome,” chuckled Thalman. “I talk with him a lot and we have a good connection. He’s one of my biggest mentors. We’ve got a bunch of volume circuits, and some high weight, low rep movements right now. There’s some plyometrics too. It’s all over the place.”

Thalman’s talent extends far beyond the field. He’s bilingual, and is a high-achiever in school. Regardless of where life takes him, both on the field and academically, he’s proven that he’ll give it his all.

“Being a coach would be nice, or follow in my uncle’s footsteps maybe, who knows. I’m interested in medical school, so I’ve got a lot to think about in the next year and a half. I like to do well in school, so I’m just really interested in [the sciences]. My mom works at a hospital too, so I hear about all of that stuff, and my sister is becoming a nurse. It’s kind of just around me all day.”