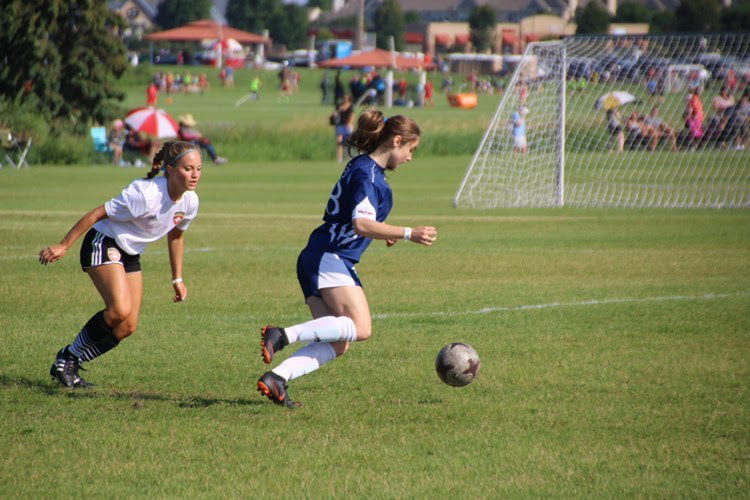 During her time with the Bonivital Flames, striker Peyton Enns earned a reputation as a clutch performer. Her speed, strength and aggressiveness both on and off the ball made her a nightmare to defend, and she could be counted on consistently to score when it mattered. Perhaps the best example of Enns’ game-changing abilities came in the 2018 MSA Cup final against St. Charles, where she was named MVP after scoring the lone goal on the contest in the second half.

“Basically, she was on a mission,” recalled Steve Dreger, who coached the Flames’ U15 group that year.

“She was very strong on the ball and always threatening to get in behind the opponent’s defence. The goal was pretty spectacular. It wasn’t just a tap-in. It was Peyton at her finest. She was full-speed, ended up getting past the defender and was on-on-one with a really, really strong goalkeeper. She was able to get a good angle on her using her speed and found the back of the net. It was awesome. Peyton was definitely a big game player. She had a whole different level that she could get to, and her speed is just insane.”

Enns’ playmaking abilities are a result of a tireless work ethic rooted in persistence and perseverance. The same can be said for her life off the pitch. For years, the playmaking forward has courageously dealt with anxiety, proving day after day that she’s just as tough mentally as she is physically.

“I used to have a lot of anxiety before big games. It was something I really tried to work on, because it would always affect my performances during games. I would just be way too anxious and not in the right mind,” she noted.

“I would really try to visualize key parts that I wanted to have happen during games, and just really lock in. I just really tried to transition my anxiety into more intensity instead.”

Enns’ anxiety stemmed in part from trauma suffered in grades one and two.

“I did deal with bullying, and quite honestly it was hard on the mental health. It just made me really not want to go to school. I did speak up about it and eventually I was moved from certain classes. My mom helped a lot with it, but definitely in the early years I cared a lot about what people thought of me.”

As Enns mentioned, it was hard for her to talk about what she was going through mentally. Bringing up the subject created further anxiety, and she’d feel the urge to go to sleep, in order to “restart the day.”

As she got older, playing soccer became an escape to channel her emotions, but it took time and patience to develop that skill.

“In rec soccer and the developmental years, I just really was so anxious. I had to take breaks from soccer sometimes and sometimes I wouldn’t even want to go to games, because it would make me so anxious just to think about it.”

Enns received valuable mentorship throughout her mental health journey. The first occurred when she was ten, when her mom took her to see a therapist.

“He would just say not to let your anxiety get the best of you, and just work on changing the energy and having for faith in yourself,” she noted. “It was just nice to talk to someone about it and I grew more confidence.”

Enns received further guidance from a sports psychologist when she was 14, who would join the Flames’ premier-level squad for mental resiliency sessions.

“That was also somewhere where I could talk about it. It was just a process where eventually I got more confident in myself, and that really changed things.”

At the U15 level, the reliable striker was lifted up by the positivity of Dreger, who brought out the best in her. He’d been Enns’ coach at the U12 indoor level and provided a calming presence to the roster. Under his watch, Enns was unstoppable, scoring 12 goals as the Flames won the provincial title with a 16-1-1 record.

“I had him for one year prior, and I thought he was so fun,” she says.

“He was really positive, and that was the biggest thing. He definitely had a lot more energy and positivity than most coaches I’d had, and so him coming in for our U15 team, I think that really helped change things around. Before, we didn’t have much positivity or energy at all, and he really emphasized that and helped us feel more confident in ourselves. It was the first time in a while that I’d felt that much confidence.”

Taking soccer to the next level

In grade ten, Enns received one the most important opportunities of her soccer career when she was invited to play for Valour FC Elite. Open to the top girls aged 14-17, the program travels to Canada and the United States for showcase games, and is a great opportunity for rising stars in the province to see how they line up against North America’s best.

More importantly, Valour gave Enns a chance to face her anxiety fears head on while also fostering her U SPORTS ambitions.

“At first it was overwhelming. They were saying that you had to email all of these coaches and get noticed, so it was a bit overwhelming for sure, but when I joined Valour I also realized that I could use soccer for something in my later life. Before, I was playing just to play, but with Valour you’re talking to all these girls who went to university from the team, and it made me realize I could use soccer as an opportunity for school.”

The University of Regina took notice of Enns’ play early on. Head coach Bob Maltman came to watch the striker during a Vancouver showcase game and liked what he saw. Not long after, she went for a tour while also getting to train with the team. Just as valuable for Enns were the resources and supports, both educationally and personally, on campus, which aided in her decision to commit to the school for 2021.

“The school, they did a great tour and showed a lot of great programs outside of team that would really help. I thought that was really important. Other schools I went to, they would talk about it a bit, but the U of R, that was their main focus. They wanted you to be able to achieve well educationally and academically. That was really important to me. I’m going there to play soccer, but I am there for an education.”

The COVID-19 pandemic resulted in severe anxiety for Enns. Thankfully, she was prepared and mature enough to handle the stress.

“I had anxiety concerns that I would visit the doctor about,” she says.

“When I was in quarantine, I would really try to work on myself a lot and my mental health, and just really try and get my mind on track. I feel like that’s the most important thing you can do for yourself. I do a lot of journaling and meditation now and stretching. Anything that I feel can help my mental health.”

Enns’ mental health journey is an inspiring reminder of the power of the mind. Her message to others, is that it’s okay to speak out about how you’re feeling. There’s always someone who’s going to be willing to listen.