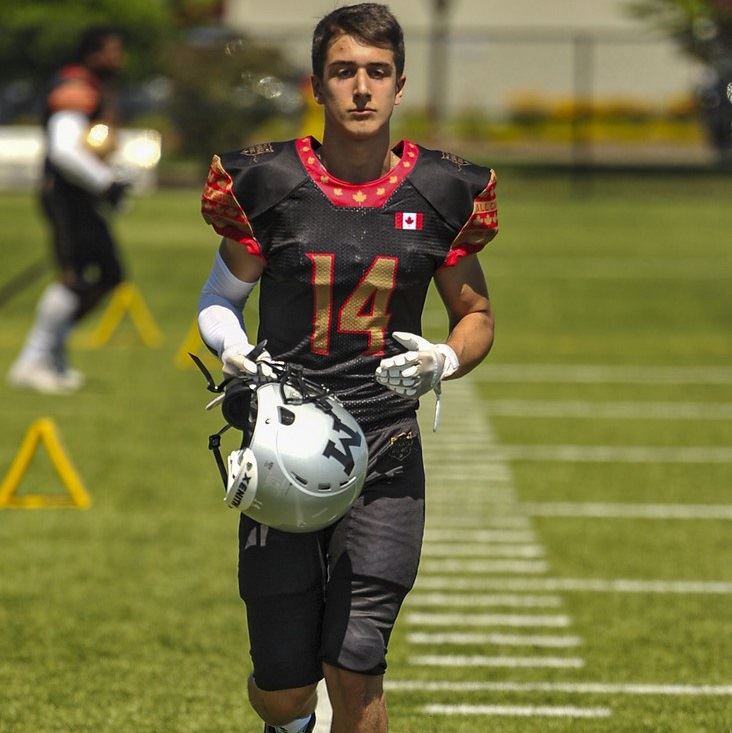 Valley Huskers commit Urciuoli a student of the game

In roughly four years, Maples defensive back Adamo Urciuoli went from raw prospect to player of the year. His impressive development is a credit to his work ethic, which continues to drive him as he prepares for his junior football debut in 2021.

“When I first started, I didn’t really know much. I was fairly small compared to the other guys,” he says.

“I just had to work really, really hard to get to where I am. It took a lot of practice and a lot of hard work, but I really wanted to learn. I showed up to all of the practices and paid attention to what the coaches had to say and they guided me in the right direction.”

Adamo and his older brother Matteo played a variety of sports growing up, but didn’t participate in tackle football prior to high school. Matteo strapped on the pads in grade nine, and a year later his younger brother followed. Having a previous relationship with Marauders head coach Peter Serrette helped in the pair’s transition to the gridiron.

“My dad and [Serrette] used to be friends in high school, so I already knew of him growing up. He’s a really, really good coach and welcomed me into the program,” noted Adamo.

“He was always coaching me up and giving me tips to try and help make me a better player. I think he saw that I was a hard worker, and was willing to put the time in. During the practices, I would ask him how to be a defensive back pretty much, just asking him for tips and what he would do in certain situations. Leading up to the games, we were watching film and pointing things out to each other. It really helped with communication for when we were on the field.”

Adamo was just 140 pounds as a freshman and saw limited time on the field at corner, but that didn’t deter him from getting better every day. He showed a willingness to learn and was fearless when it came to open field tackling.

“I feel like [tackling] could be a tough thing to do, especially when you’re undersized,” he says.

“It comes down to a lot of technique, and you can’t be scared when you’re in that open field situation. It kind of just came naturally.”

Urciuoli made the weight room his home in the offseason and showed increased confidence once the 2017 high school campaign started. He saw more time on the field, contributing as both a defensive back and on special teams while continuing to showcase his physicality.

The defining play of Urciuoli’s grade ten season occurred early on against Fort Frances, a team that developed a great rivalry with the Marauders over the years. Muskies pivot Brady Meeks – a future Most Outstanding Player – had rolled outside of the pocket and was primed for a big gain using his legs. He attempted to drop his shoulder on the 5’10” defensive back in space and found nothing but the ground for his trouble.

In an attempt to get Urciuoli more involved in the run game, he was shifted from corner to field half as the season progressed. It was here that he took his game to the next level.

“I feel like I fit the position well,” he mentioned. “I know teams like to use the field side, so I feel like I have the speed to make plays and just make the tackles I need to make.”

Putting it all together

The 2016-18 seasons were about development for Maples. Much like Urciuoli, there were a number of promising young players who simply needed to get more reps. The squad went just 2-18 during that span, but they didn’t hang their heads. When the group’s senior year occurred, everything came together.

Urciuoli was a huge reason why. He gained an additional ten pounds between grades 11 and 12, parlaying a spectacular summer into an even better fall.

“Once I got into the offseason of my junior year, I started incorporating some five-by-five lifts to get my strength up, after doing some research of how I should be lifting. With football, you’re trying to train a movement so that you can have more power. I started doing power cleans and squats and heavy bench. Once I started learning more about that, that’s how I started training.”

Urciuoli’s work wasn’t limited to the weight room. He was also a part of Team Manitoba’s prospects program for two years, and travelled with the squad to Ontario for the Thunder Bowl in June of 2019.

The fearless defensive back was coached by current St. James Rods majors head coach Caleb Goudie, who along with Manitoba Bisons defensive back Josh Robinson, helped him refine his technique in coverage.

“He’s a great kid, one of my favourite young defensive backs that I’ve coached so far,” noted Goudie.

“He’s really focused on the game and his craft and handles himself well on the practice field. He’s got a quiet swagger, plays the position with confidence and isn’t afraid to get gritty and make a tackle.”

Urciuoli led Maples with 44 tackles and also had two interceptions in his senior year, pacing a squad that included 12 returning starters. Division 3 Lineman of the Year Tevonne Albert added 37 tackles and four sacks, while running back Mason Jesmer and quarterback Harper Brown combined for over 1000 yards on the ground and 14 majors. The Marauders finished 4-1 in the regular season before being knocked off by eventual division champs Fort Frances in the semi-finals.

“Our grade 12 team was probably the best team we had in the four years that I was there. It helped that a lot of the guys on the team were there since our freshman year. The whole team I think had 20 or so seniors, so a lot of us grew up in high school together and hung out at school,” he says.

Urciuoli was honoured as the Division 3 Defensive Player of the Year at season’s end. He was thrilled to receive the honour, but was just as happy with what his team was able to do on the field, considering the adversity they’d endured the three seasons prior.

“Everyone thought Maples wasn’t a great football team, and people were doubting us. I knew we had a great group of guys, and we had a great season. All the hard work paid off. It came down to the work ethic that we all put in, and I feel like we really deserved to be there.”

Urciuoli’s work hasn’t stopped despite the pandemic. He committed to play for the Valley Huskers in the BCFC shortly after COVID-19 hit, and recently set up his own home gym in order to continue building strength. He’s upped his weight to 170 pounds, and is eager to get to around 190, as the coaching staff has an interest in testing his skills at safety.

Regardless as to where he plays, you can guarantee that Urciuoli will give it his all, something he’s proven from day one on the field.

“I’m always looking for ways to get better. I feel like I’m always the hardest-working guy on the field. I’m always going to give everything I have, whether it’s in the weight room or on the field. I’m just trying to get better every day. I’m proud that I stuck through it all and worked through everything. Some people told me that it seemed like I wasn’t making any progress, but I kept on working and working, because I knew that eventually I would see results.”