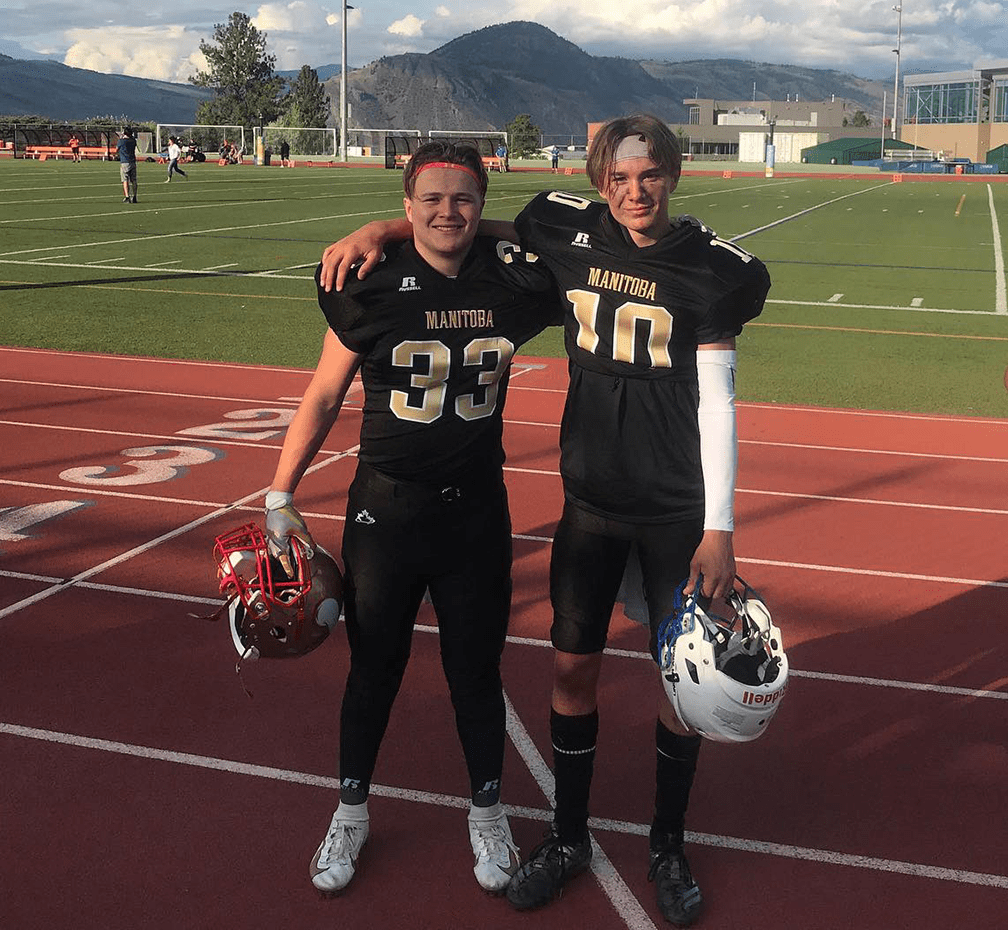 Prior to high school, River East’s Zachary Topping had never played organized tackle football. Instead, his time was spent at the rink.

“I used to collect hockey cards and organize them by statistics and stuff, because I was a huge hockey player all the way until the end of my grade eight year,” he says. “I used to tell my brother I’m never playing football, because I thought I was a hockey player, but obviously that turned around.”

Influenced by his older brother Ethan – the 2018 Division 2 Defensive Player of the Year in the WHSFL as well as a CTV Bowl champ – Zachary hit the gridiron in grade nine the same year. Blessed with natural athleticism from his time on the ice, he was placed at quarterback for the Kodiaks’ JV nine-man team.

“I was wanting to play receiver, but we didn’t have a quarterback,” he chuckled. “I kind of got thrown in under centre and ran the ball a lot because I didn’t know how to throw the ball.”

It’s safe to say that Topping got the football bug after his first year. He consistently looked for ways to improve his game in the offseason, which included a trip to British Columbia as the starting quarterback for Manitoba during the U16 Western Challenge. His nod as QB1 was particularly impressive, as he’d never practiced against a full 12-man defence prior to tryouts.

“I went to U16 prep camp, got a little bit of coaching and felt that I played well, so I went to tryouts. It kind of just took off from there,” he noted. “I’m a competitive person, I like winning, and I always want to push myself further, but I definitely wasn’t expecting to make, and especially start for that team.”

The provincial team was Topping’s first exposure to quarterback specific coaching. Ian Bowie, who directed the pivots, was a major influence on his game, as was head coach Jeff Ready, who prides himself on relationship-building with his athletes.

“Jeff Ready was, and still is one of my favourite coaches. He was an unreal guy and unreal coach. He seemed to just understand me really well. We didn’t get the outcome we wanted from the tournament, but I’m not going to lie, when I stepped on that field against Saskatchewan, that was the first time I’d played in a 12-man football game,” added Topping.

“Seeing six extra guys on the field kind of messed with my head a bit. We didn’t get the outcome we wanted, but it wasn’t awful, because of the connection I got with all the coaches, like Bowie, our quarterback coach. He’s an unreal guy. He was a great coach for me especially, because I’d never been taught how to play quarterback. He just helped me understand what I was supposed to be doing moving forward.”

Topping was the Offensive Player of the Game against Alberta, and flashed his open field ability against Saskatchewan. On one particular play in the first quarter, he made a trio of defenders miss in open field on a quarterback keeper. The play resulted in a touchdown but was called back due to a penalty.

“Provincial team was crazy for me. I still read the tweet about my run against Sask that got called back. It makes me happy. I remember pulling that ball and I was supposed to throw it. I

was just like you know what? I’m taking it. It was a great experience, and I loved my teammates. It was definitely the start of something that I didn’t think was even there for me.”

Sophomore success at the Division 1 level

The pivot parlayed his provincial team experience into an impressive fall season. The Kodiaks moved up to Division 1 in 2019, where Topping helped lead his squad to a 4-3 regular season record as a sophomore.

River East started off with a bang, topping Vincent Massey Brandon 23-10 on the road. Topping threw two touchdowns and ran for one, knocking off a Vikings roster that included U18 provincial team captain Jayden Engel at linebacker.

“Walking on that field and warming up out of town, and seeing the bigger guys compared to nine-man, it was a different feeling,” he says.

“Jayden Engel was standing on the other side of the field when I lined up. Owen Unrau, who made U18 the year I made U16, he was my running back. He looked at me right before we walked on the field and said ‘make sure you watch out for number 12.’ I was like why is that? He’s like ‘he committed to Saskatchewan last week.’ It blew my mind. I’d never been in a situation where committing was even a thought. First play, Jayden came off the edge and I’m not going to lie, he got the sack. It was very impressive, but if you look at the score sheet, we came out big in that game. It was just about getting used to the feel of playing in an atmosphere I wasn’t used to.”

Topping made plays with his legs and feet all season, posting ten total touchdowns, while his defence – led by the likes of Simon Kosman and Owen Unrau – flexed their muscles in victories over Kelvin and Murdoch MacKay.

“When I was going over my stats, I was upset that I only had ten,” he joked.

“I know it’s only seven games, but I thought I could have more. We also played in some brutal weather. I had three games in my season where I threw less than five passes, because it was either pouring rain or snowing. Winnipeg football is definitely interesting. Honestly there’s no feeling like playing football. Playing my varsity year gave me that confidence that I can actually go somewhere. It was huge for me.”

The COVID-19 pandemic put tackle football on hold, but instead of dwelling on the negative, Topping placed an increased emphasis on his deficiencies. He arranged a consultation with Pro Prep’s top of the line nutrition team, started meal prepping and has been throwing around serious weight at the gym, putting up over 350 pounds on the deadlift not long ago.

“Weight is something that’s tough, especially when you have a quick metabolism like I do. I went and talked to [Pro Prep co-founder DJ Lalama] and he set me up. I did a zoom call with [clinical dietician] Reede [Hawton]. She helped me out a tonne. She helped me understand all these words and ingredients that I’m putting in my body and I found it helpful. I didn’t really understand what I was putting in my body, I just knew it was healthy for me. She helped me out with that. It was great. She told me to just keep doing what I’m doing.”

On the field, Topping linked up with Big Air Academy, which recently entered a partnership with Pro Prep. Founded in 2017 by former Winnipeg Rifles player and coach Aaron Giesbrecht, Big Air’s vision is to provide quarterback and receiver-specific fundamental training, while also filling a gap in the province for offensive skill player development.

Giesbrecht and the rest of the coaching staff respect Topping’s intangibles. They understand that his playing style is a bit unorthodox as it pertains to throwing motion, and have adapted and worked with him to ensure that he can use his unique skill set to his advantage.

“Gies is an unreal coach, and the quarterback coaches he has around him, I get along with them so well. I’d say they’re probably some of the best coaches I’ve ever had. I can use my legs, and I’m a bit of an athlete, so they’ve helped me with everything else,” noted Topping.

“My throwing motion isn’t perfect and I’m a little quicker with my drops and my releases and stuff, but I get the ball out there. That’s something that Gies understands. He’s expressed to me that he doesn’t need to change that. It’s just about biomechanics and getting the ball out quicker and more efficiently. I really enjoy that he’s accepted the way that I play, and is just trying to improve it from there.”

As the 2021 season approaches, Topping is ready. Unlike his varsity debut, he’ll suit up as one of River East’s veterans, a role that he embraces.

“The last team I played for, I was one of the youngest guys because it was mostly all seniors. The leadership pretty much came from all of the guys that won the championship the year before. That’s something that I’m going to have to figure out going into next year. I have been the captain on hockey teams, but I’m for sure looking at leading a new group of guys and showing them the ropes,” he says.